For this week's session, we broke out our 28mm Dark Age armies for a game of the excellent Dux Bellorum.

Written by Daniel Mersey (of Glutter of Ravens fame) and published by Osprey, these neat little rules give a nice, hassle free, simple game which you can fight to a conclusion in about an hour.

There are links to reviews of the game here.

Anyway,  we started the evening with a 'Annals' scenario - basically a stand-up knock down fight with our warbands trying simply to destroy the opposition.

Here are the fierce Pictish sea raiders mustered for the coming hostilities.  They are mostly noble warriors, with a few average chaps, and some bow-armed skirmishers.

As ever, apologies for the blurry 'in media res' pictures, taking on a substandard tin-type machine by my shaky hands during the battle.

My Saxons mill about in a surly mob opposite them, their leader taking to battle with his nobles on horseback, and mostly average warriors throughout his warband. 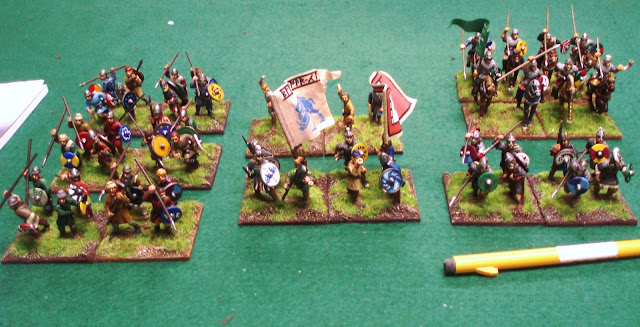 After a good deal of taunts, mead quaffing, shield biting, and rattling of spears, both sides manage to get a decent line together facing each other across a softly undulating grassy field.


The Pictish raiders huddled together in a rough 'hogshead' formation; they hard nuts up front with the lesser troops on the flanks and the skirmishers lurking in the rear.

My Saxons herded themselves into a line with the nobles and cavalry on the right flank. 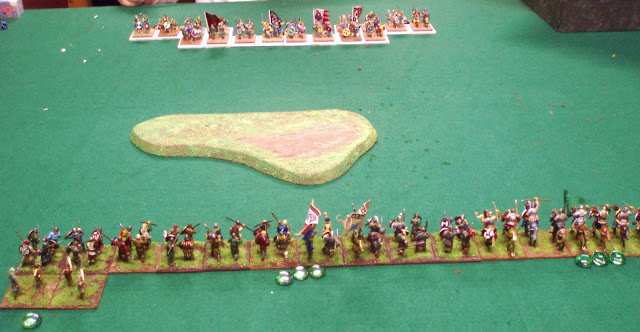 Hlothere of the Blue Boar glowered at the hated Picts and his war host hollered and yelled obscenities as the raiders swarmed forwards. 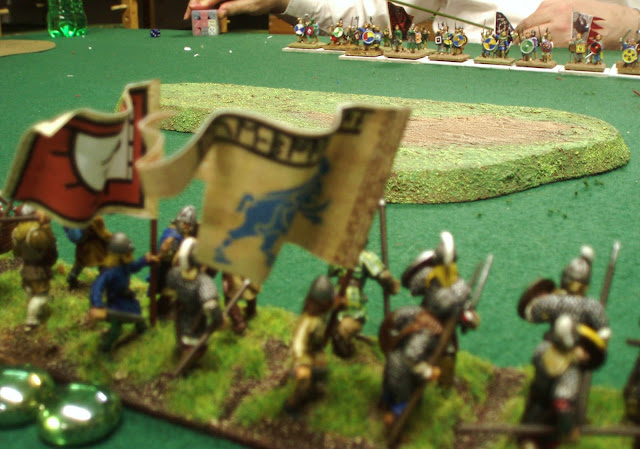 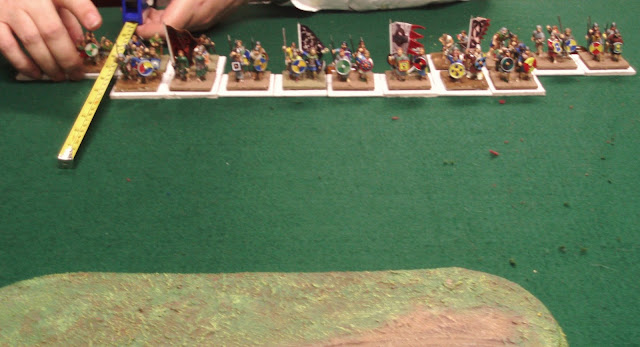 The Saxon riders galloped forwards hurling javelins and flourishing their spears as the whooped war cries and cawed like crows.  The crashed into the Pictish flank in a devastating charge and the lesser warriors fled in terror. 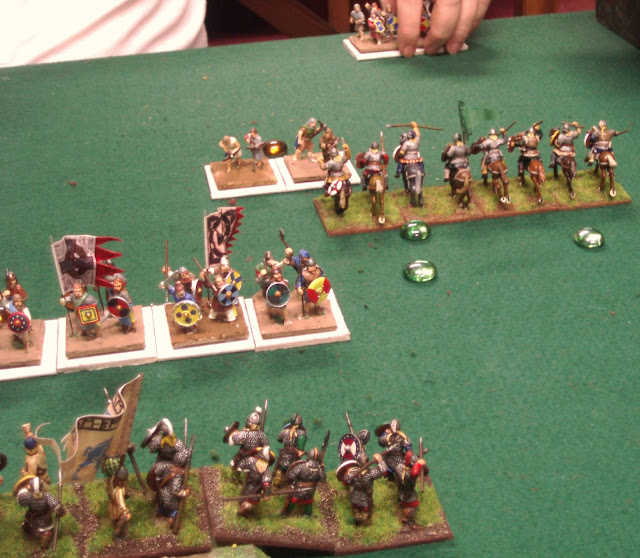 Across the whole battle line the foot warriors on both sides crashed together; the Saxons screaming 'Ut! Ut! Ut!', and the Picts responding in garbled curses.

The Saxon horse were now out into the open behind the Picts.  Some of the them galloped across hunting down and hacking apart the Pictish skirmishers.  The rest crashed into the flank of the Pictish nobles. 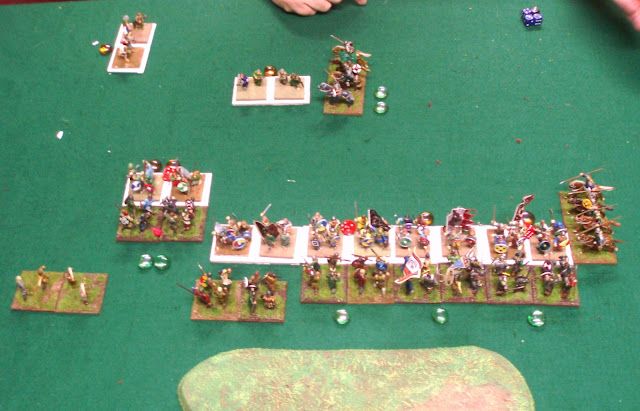 Battered, the Picts fell back in increasing disarray as the Saxons ground in hard, hacking and slashing their way through their foes. 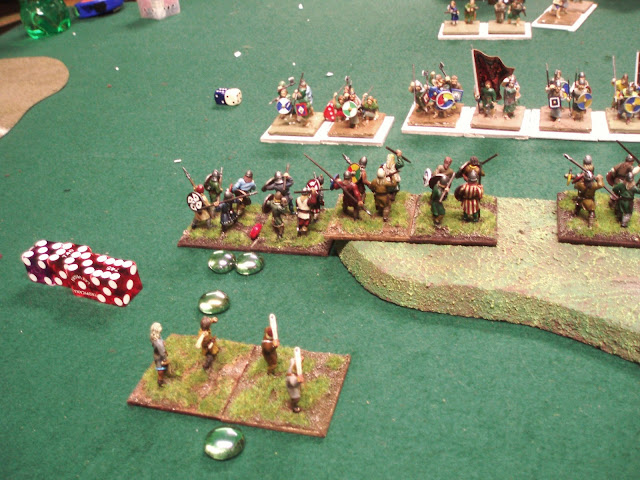 After a vicious and brutal fight the Picts were in disarray and the few remaining alive fled back to the coast, harried by the Saxon horses. 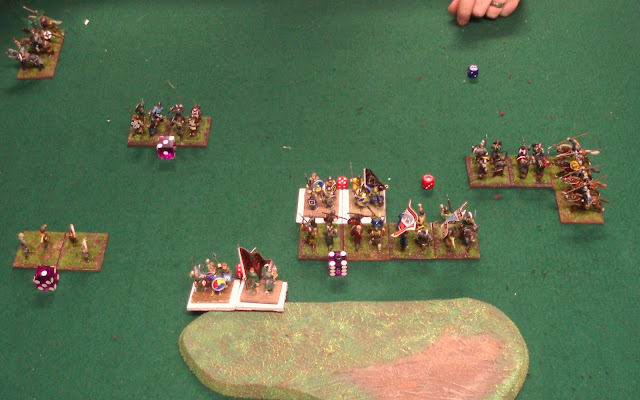 The battle ended in a resounding victory for the Saxon warriors.

So that took about 75 minutes so we set up again for a second battle.  We randomised the scenario and this time we were playing 'Kill the King'.  The only loss that would matter would be the opposing leader!

Slightly more terrain this time, so I deployed the  Saxons offset and away from the woodland.  The Picts would have the woodland, and faced off against us in a stepped line. 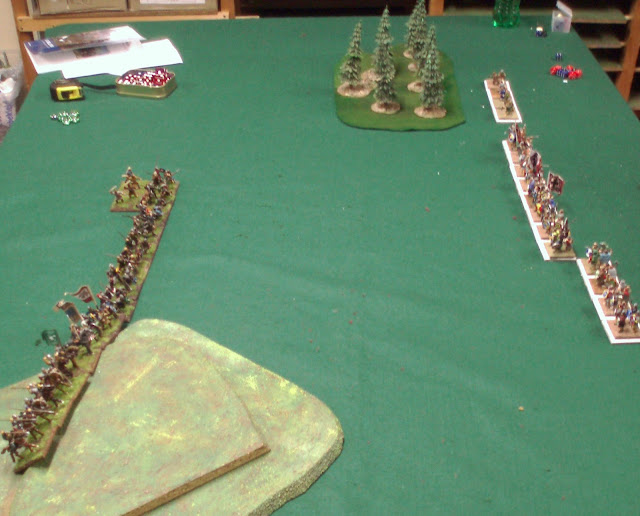 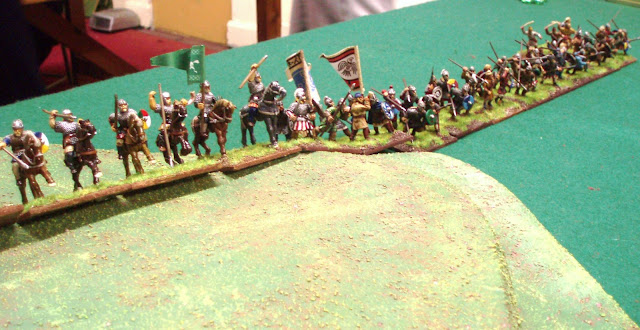 Aaannnddd....unfortunately at this point the battery on my camera died. 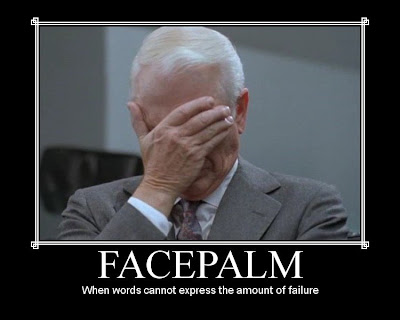 Anyway, we slapped into each other all along the line and this time the Saxon warriors came off worse.  Although our leaders managed to face each other throwing everything they had at each other, but unfortunately as the Saxons folded quickly and the army broke, the battle ended in a draw!

It was definitely a moral victory for the Picts thought.

All told a great couple of games again, from a great set of rules.
Posted by Luddite at 23:13

Warband - How to play videos

Justin Borges is running a series of videos on his YouTube channel about his impressions of playing Warband. I thought it would be inte... 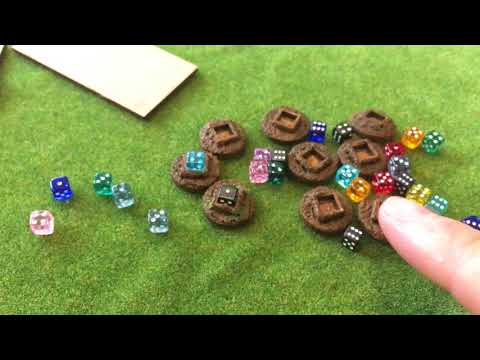