We played another game of Warband.  For this match I handed over the armies to my friends and I took a ringside seat at the action.

First thing's first the players rolled for the scenario, and got 'Find the prize'.  Somewhere on the board was a treasure chest awaiting discovery!

The players have to take the maximum terrain for the secnario and they both chose two pieces of large rough ground.  The terrain drop was kind to the dwarves as they got three pieces on their side of the table.  The pressure would be on the Goblins to press into the dwarf lines to contest the prize. 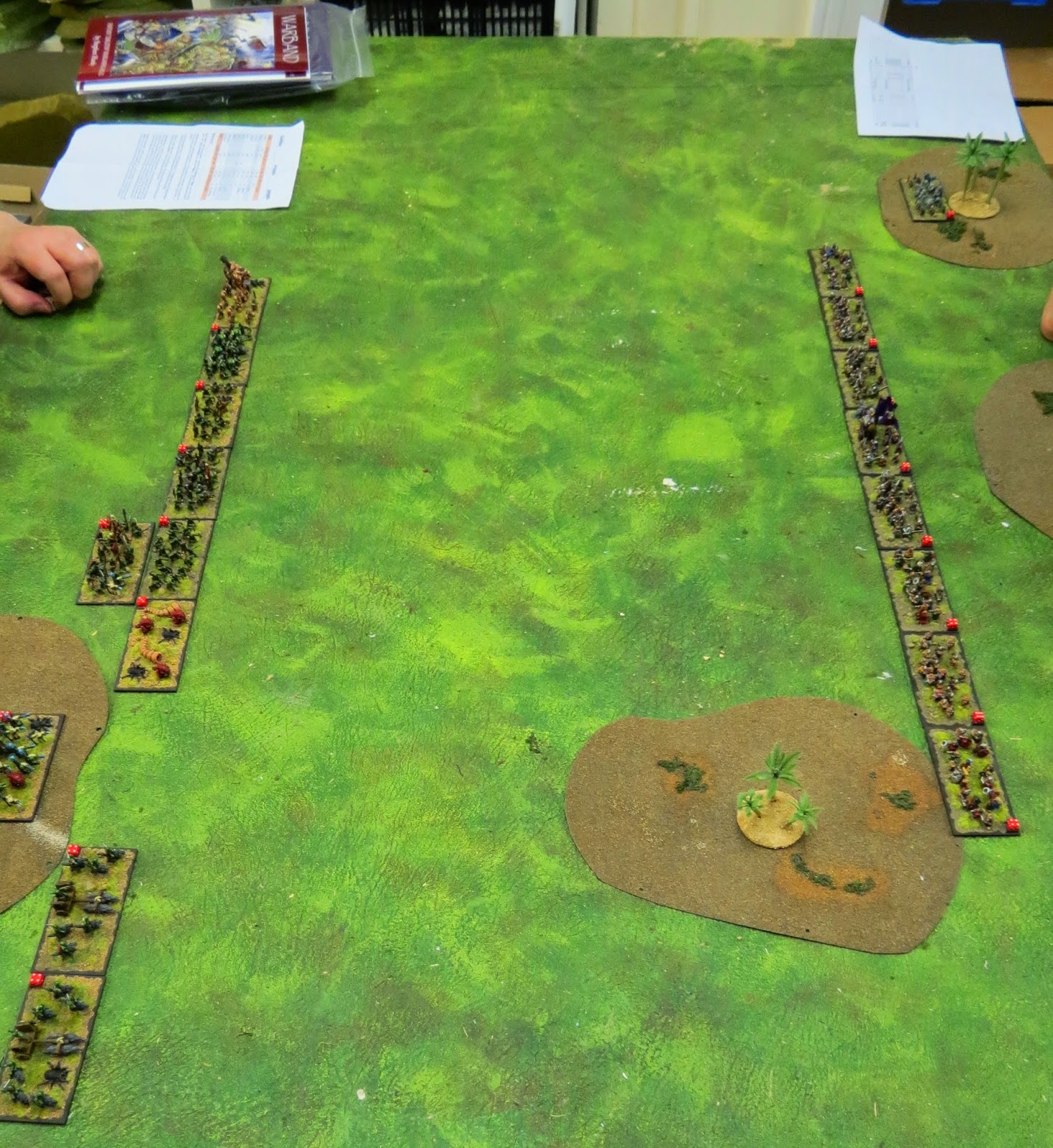 The goblins opened proceedings on turn one, and their shaman, placed in the terrain send his minions out searching for the treasure... 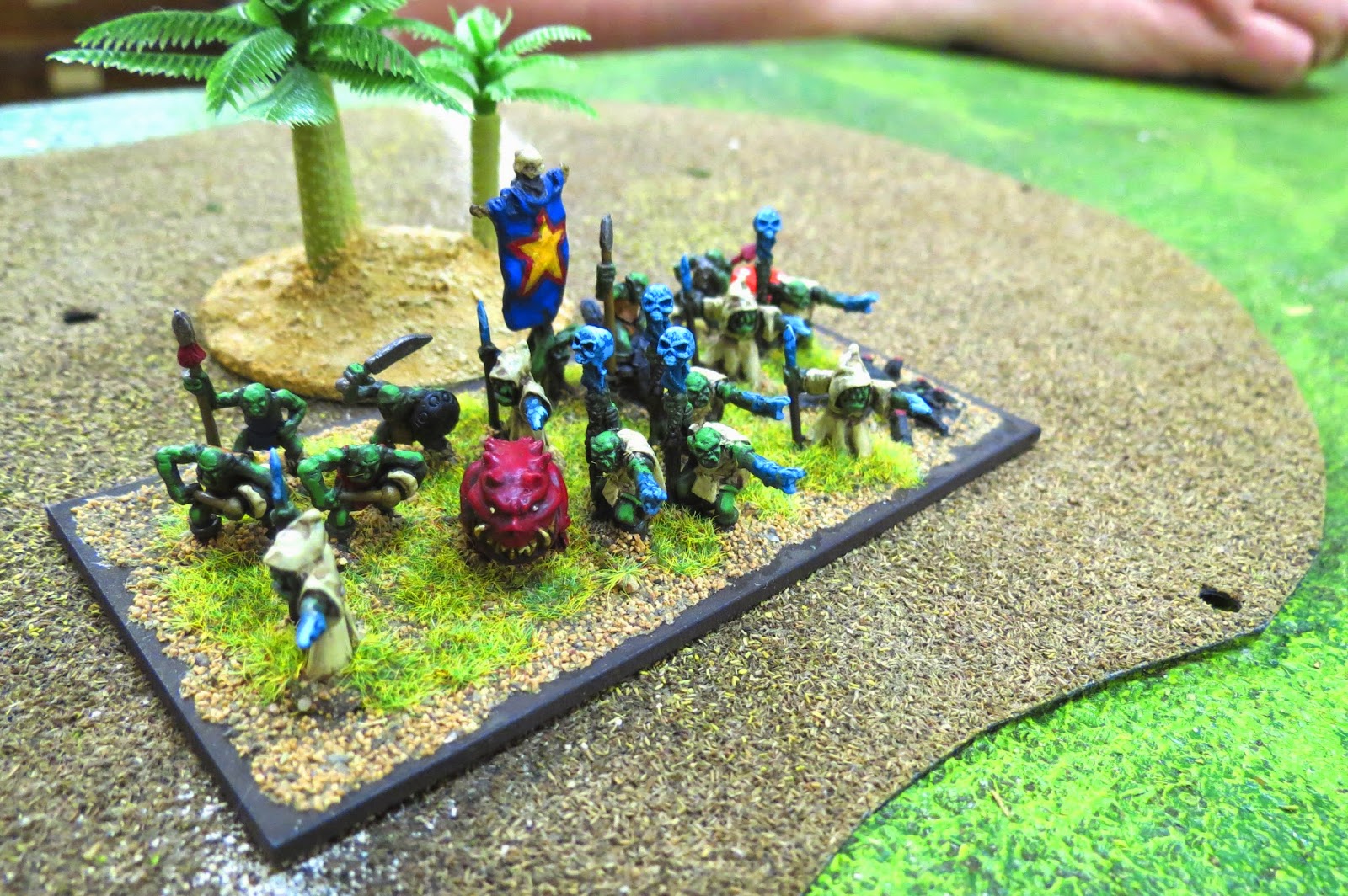 They found nothing though and the token was removed. 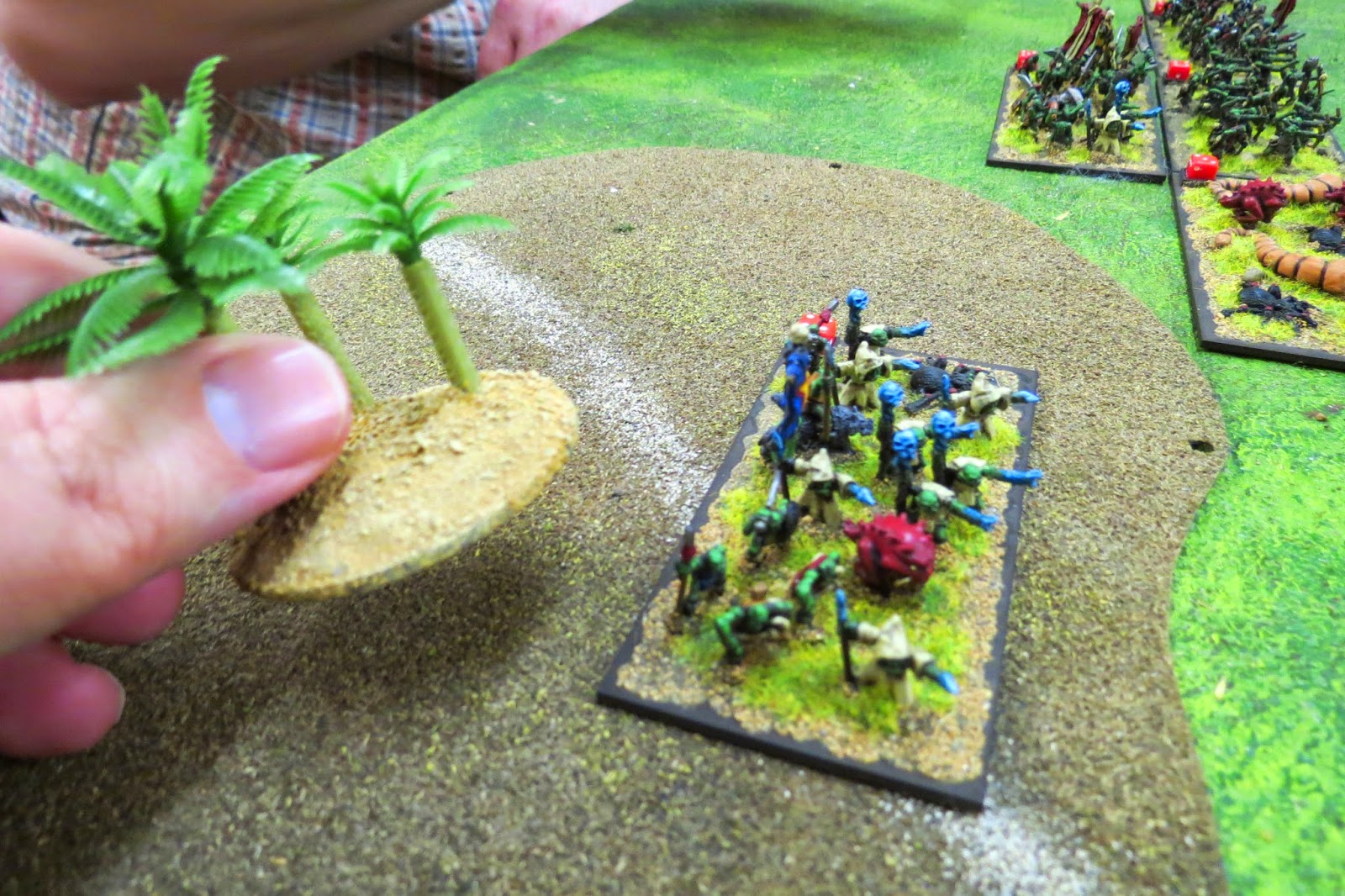 The dwarves opened their battle by advancing a unit of warriors into the central scrubland.  They searched and found nothing.
The dwarf generals sneaky tactic now became clear.  With both remaining treasure tokens to the rear of his army, all he needed to do was hold the line and keep the goblins at bay while his magic user unit found the prize (it had to be one of the remaining tokens after all!)
The dwarf spell-crafter searched the northern rough ground and found nothing, meaning the prize was behind the centre lof the dwarf line.  Their plan was working - all they needed to do now was to keep the goblins at bay. 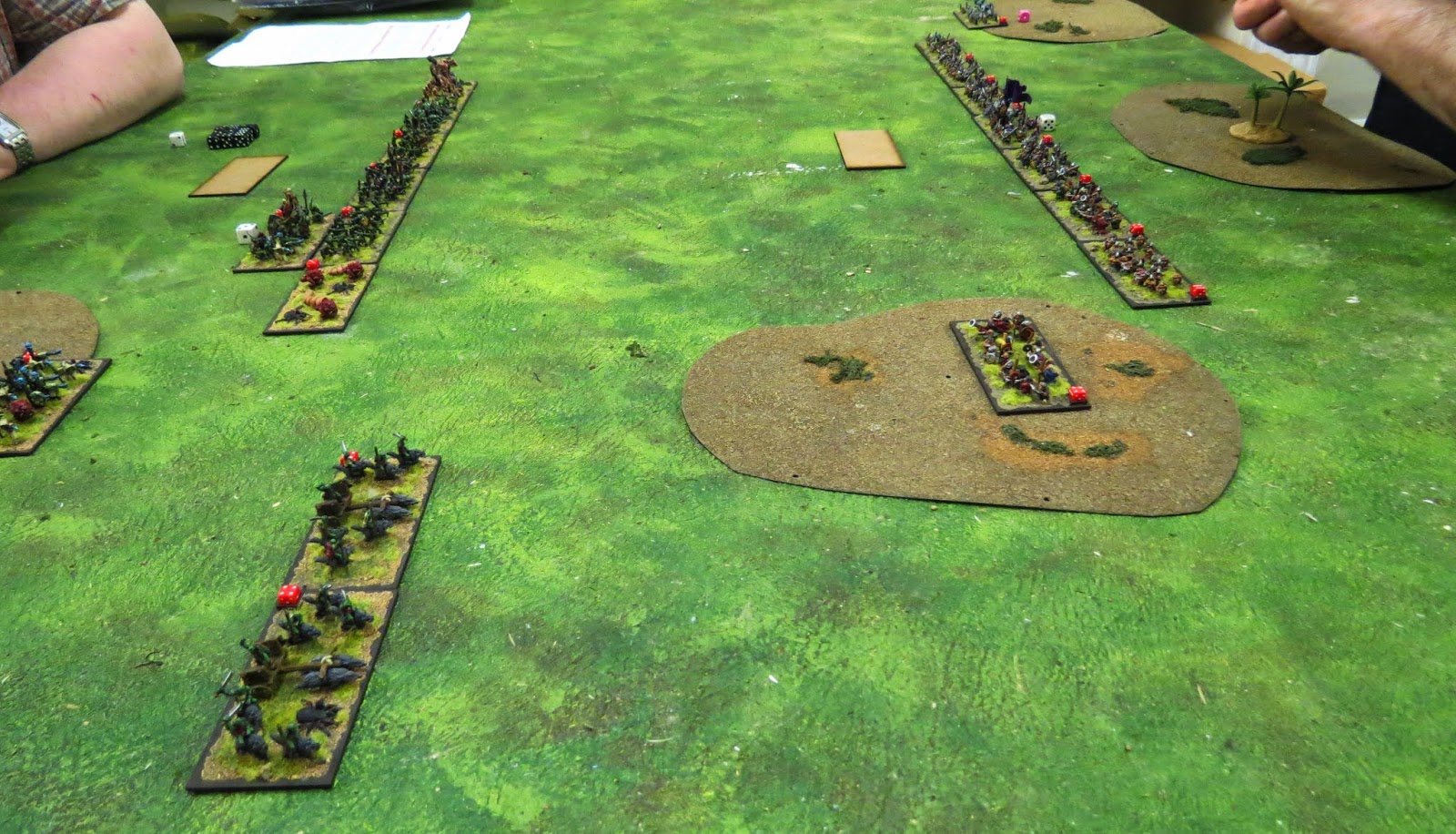 Things looked desperate for the goblins and they advanced towards the dwarves as fast as they could.  On the north flank, the giants thundered into the dwarf line, pinning down that flank.  The first part of the goblin plan began to develop, although the well armoured dwarves were able to hold their ground against all the odds! 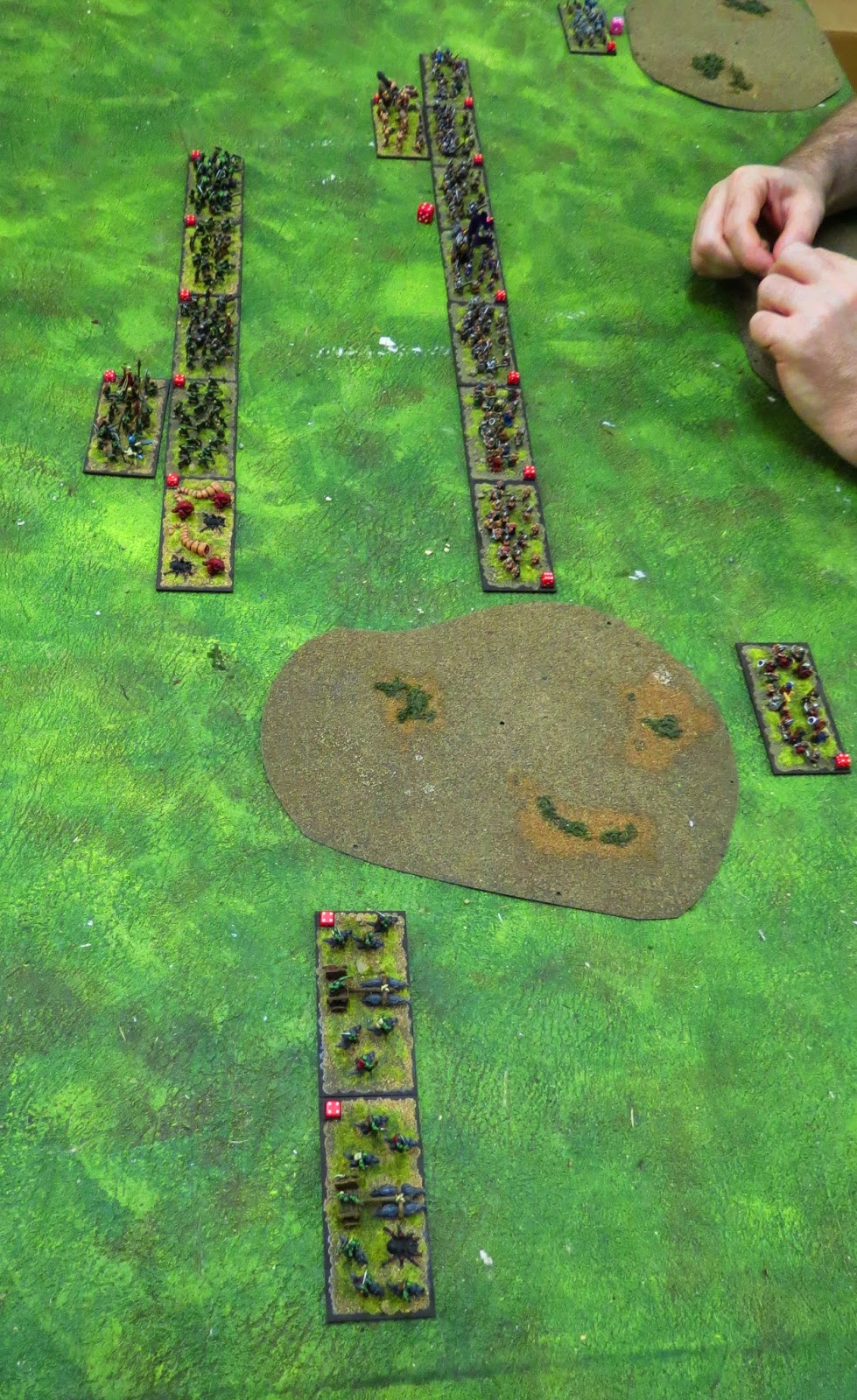 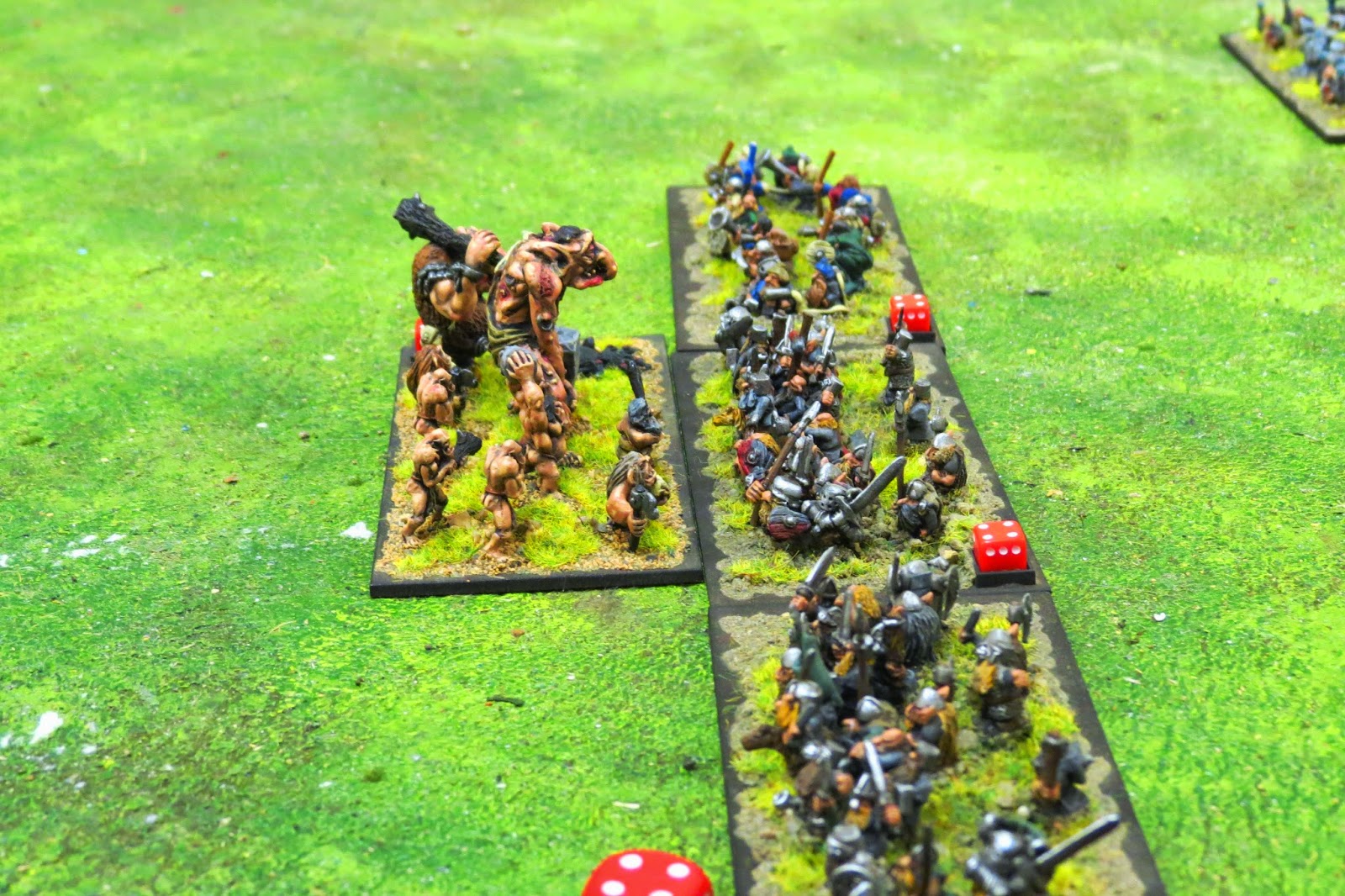 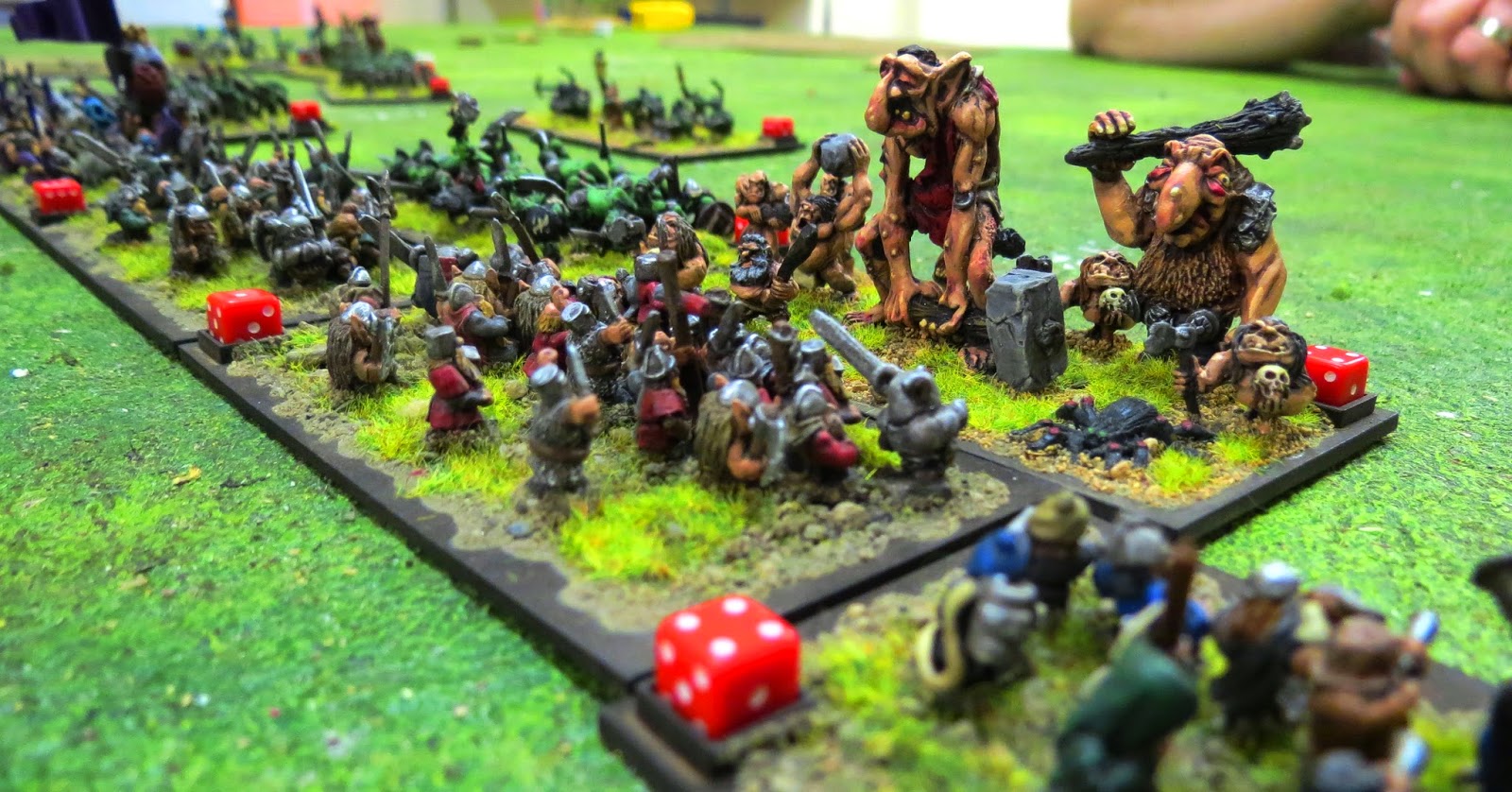 To the south, the second part of the goblin plan began to take shape.  One unit of fast moving wolf riders pinned down the dwarf warriors holding the flank, and the other swept around behind the dwarf line and headed for the prize.  The giant spiders headed out to help too! 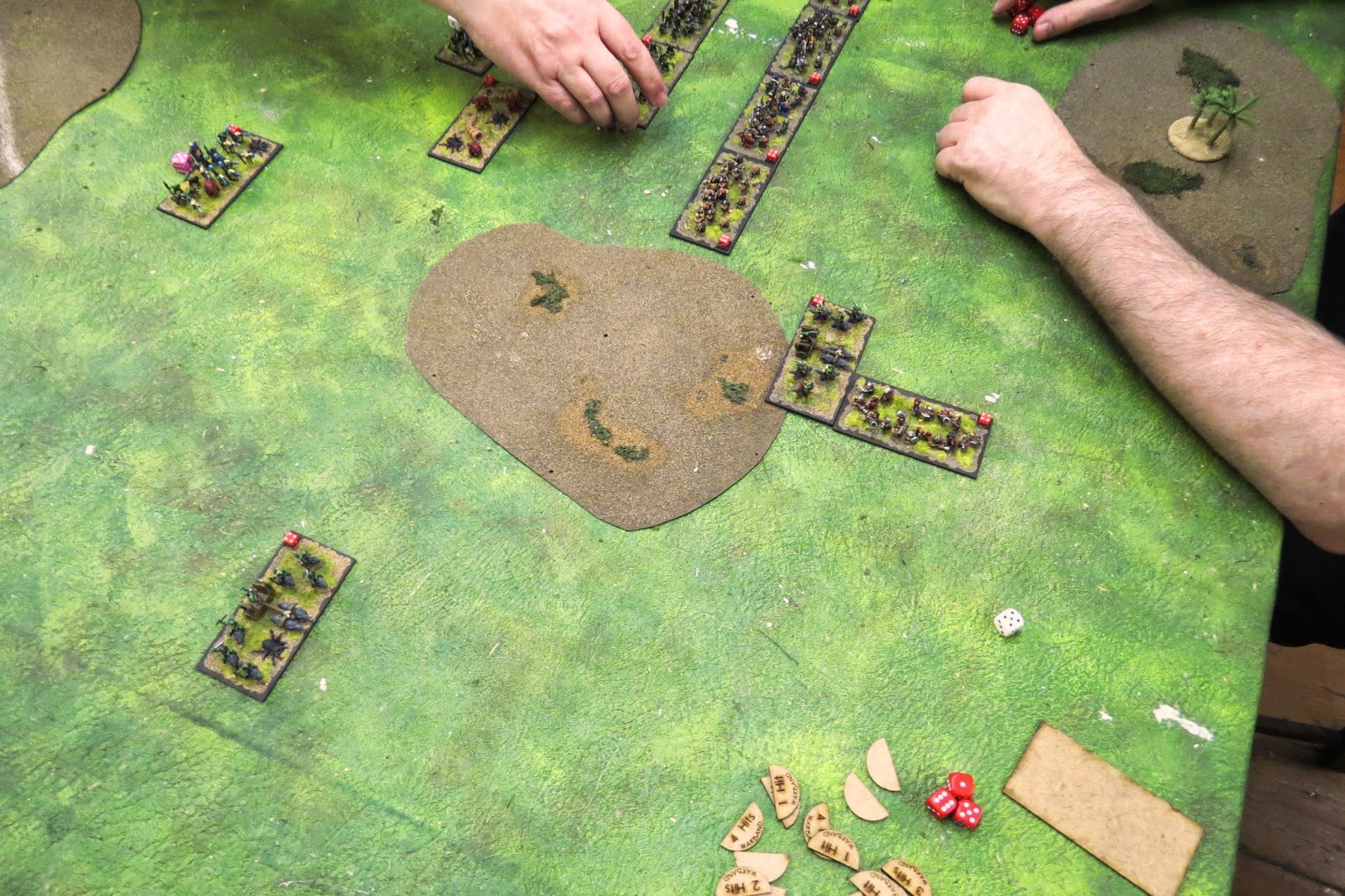 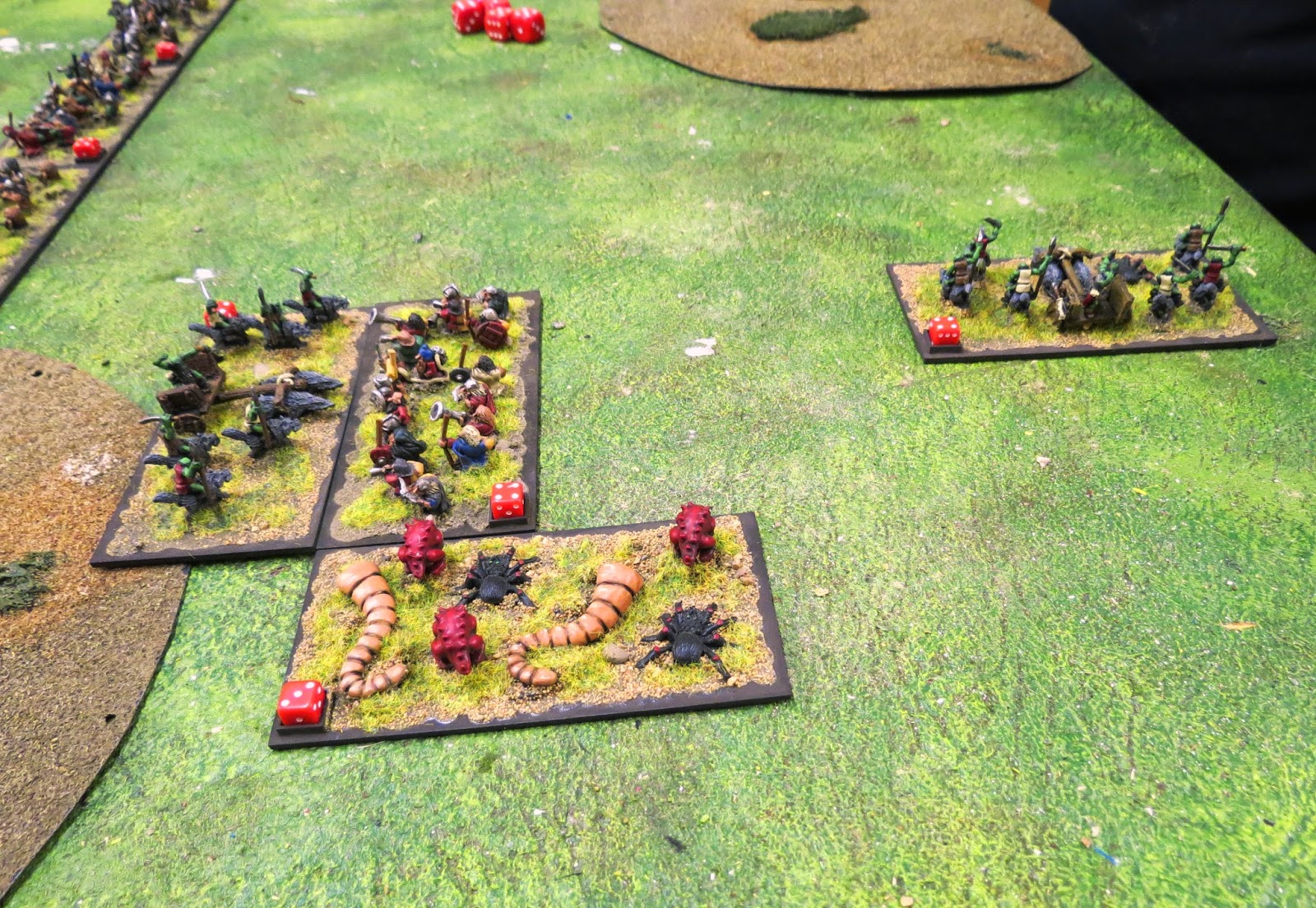 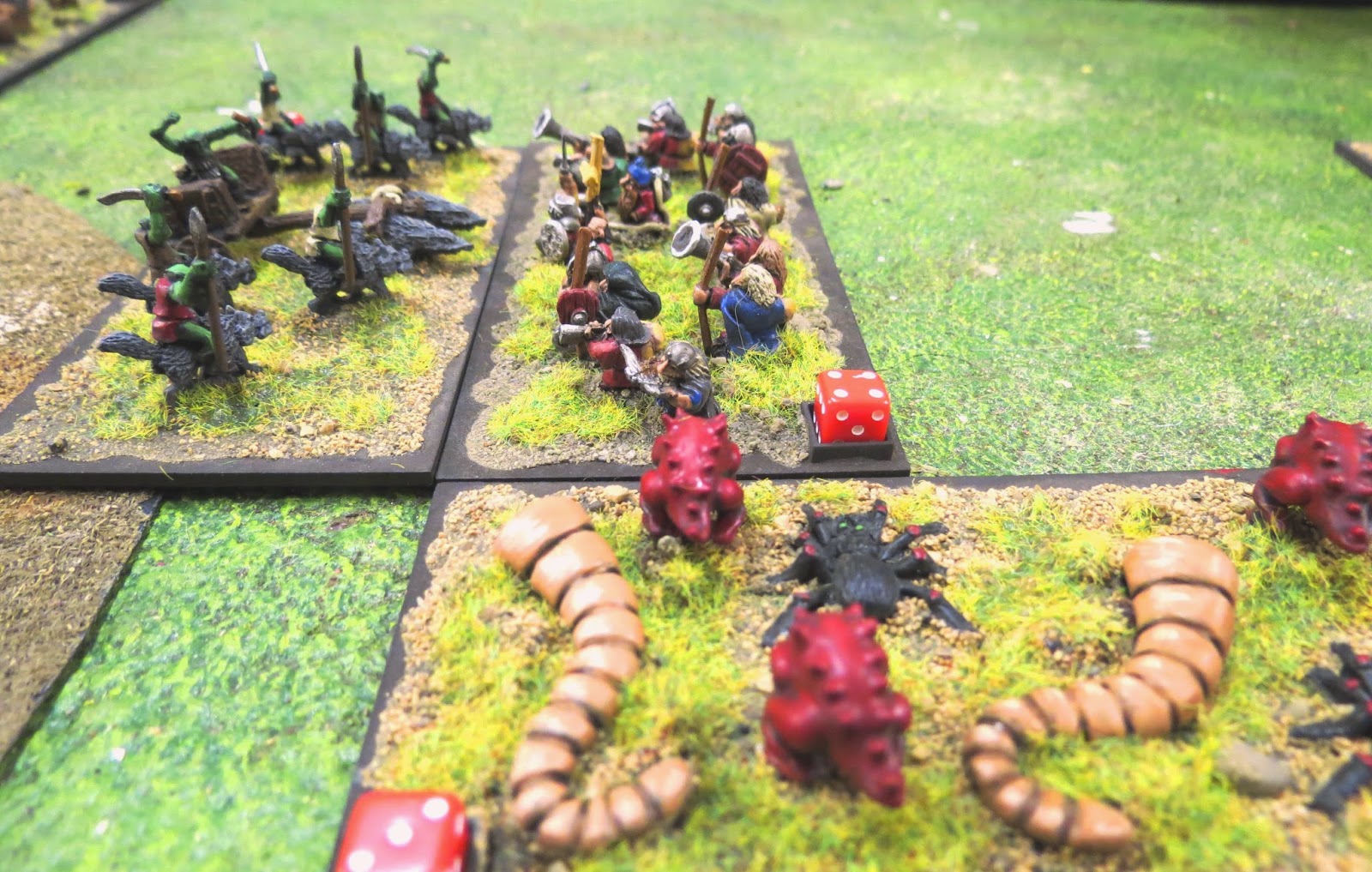 As the rest of the goblins move up, and began to shower the dwarf lines with arrows and spells. 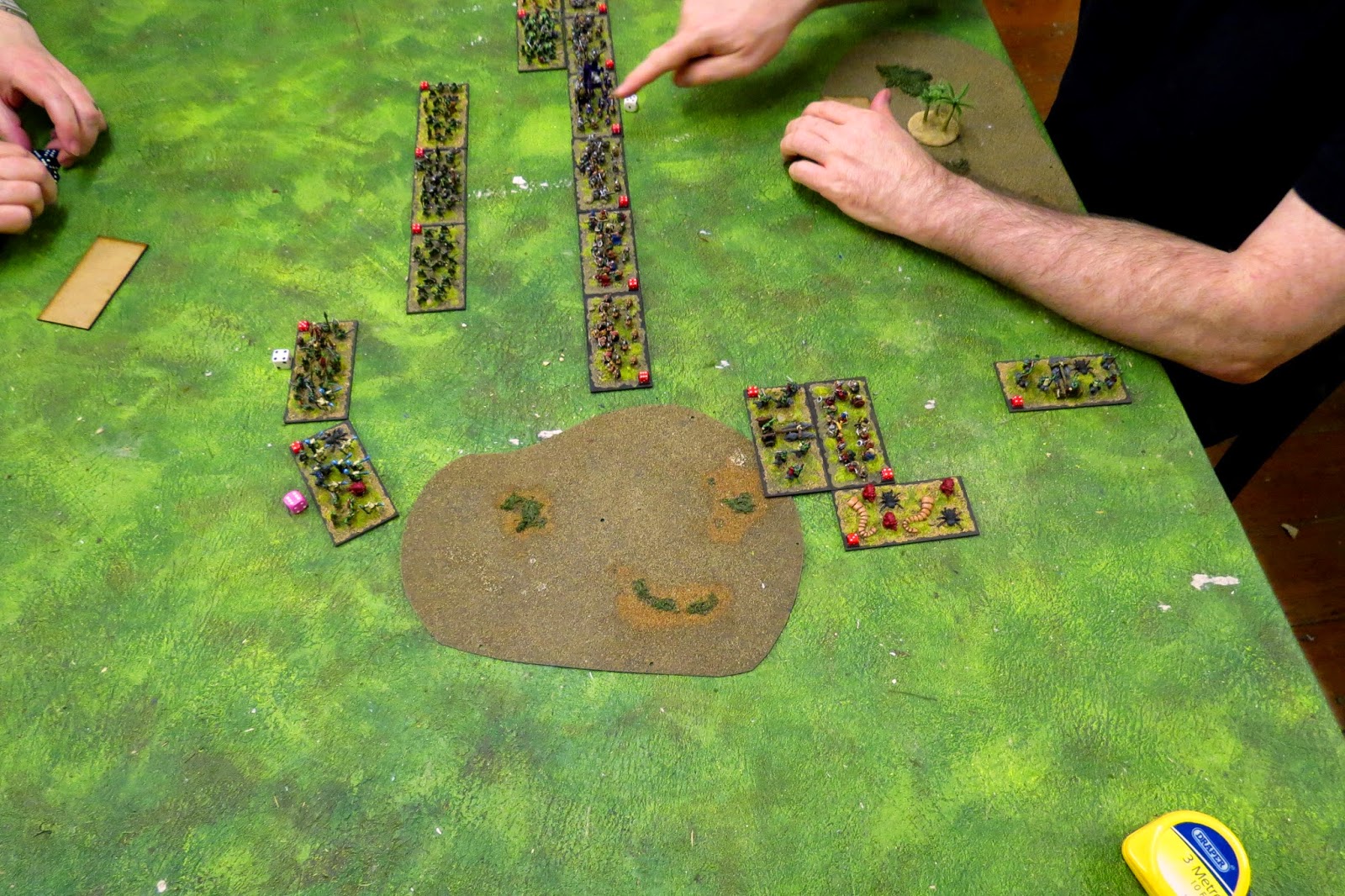 For several turns, all along the line the dwarves began to take a vicious pounding.  Their tough armour, together with magical support meant that despite the pressure from the goblins, the dwarves were holding firm.  They were buying the time they needed. 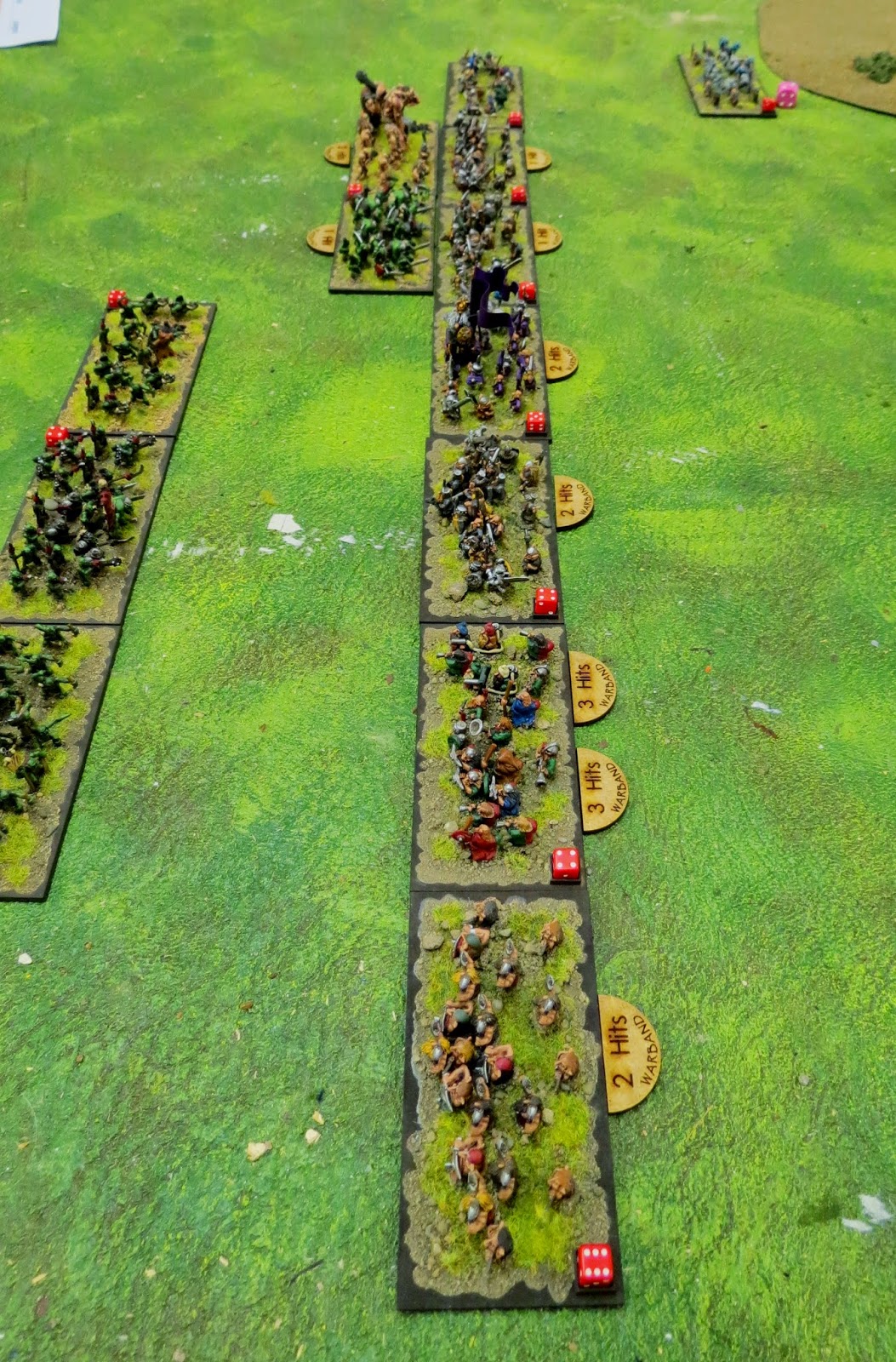 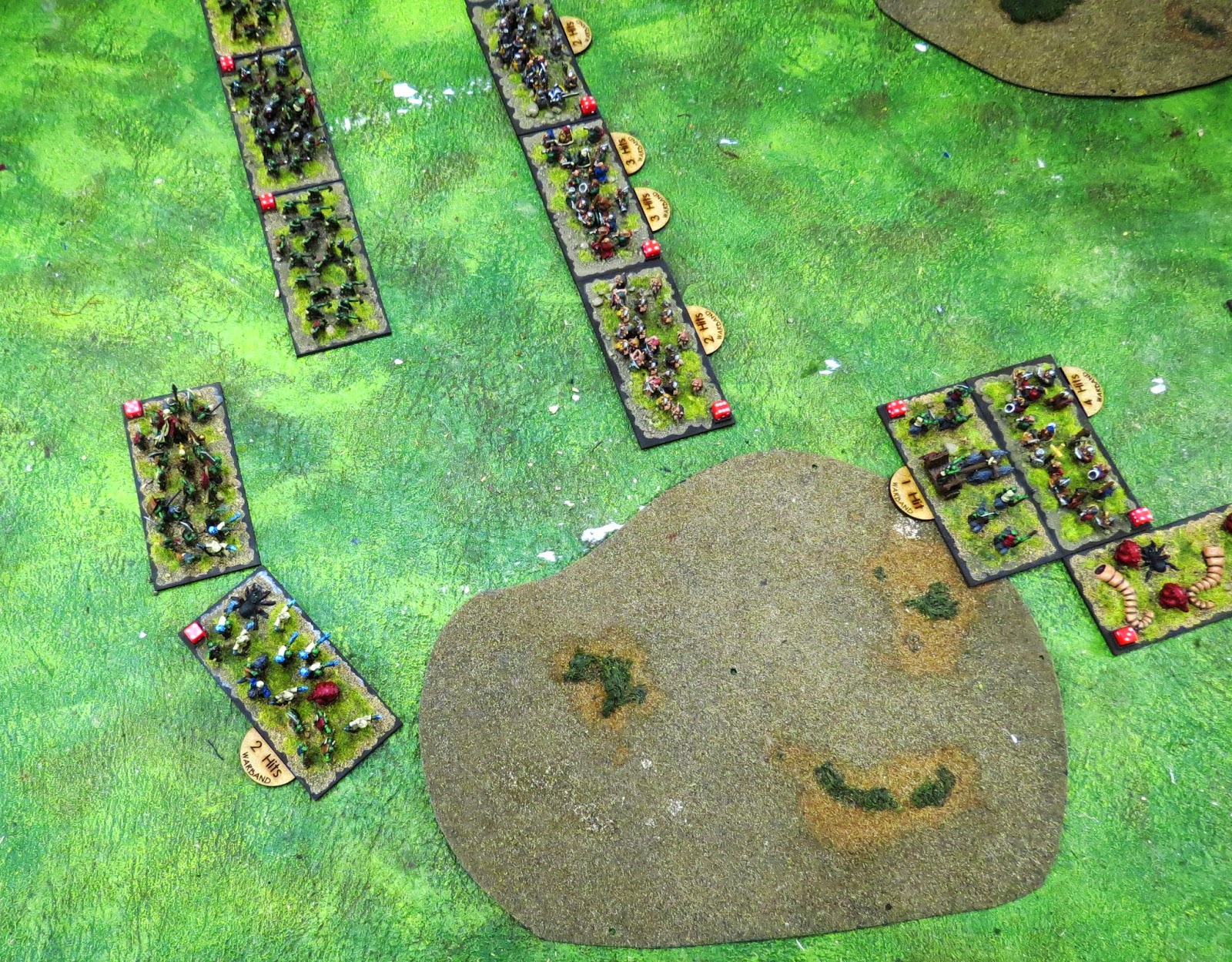 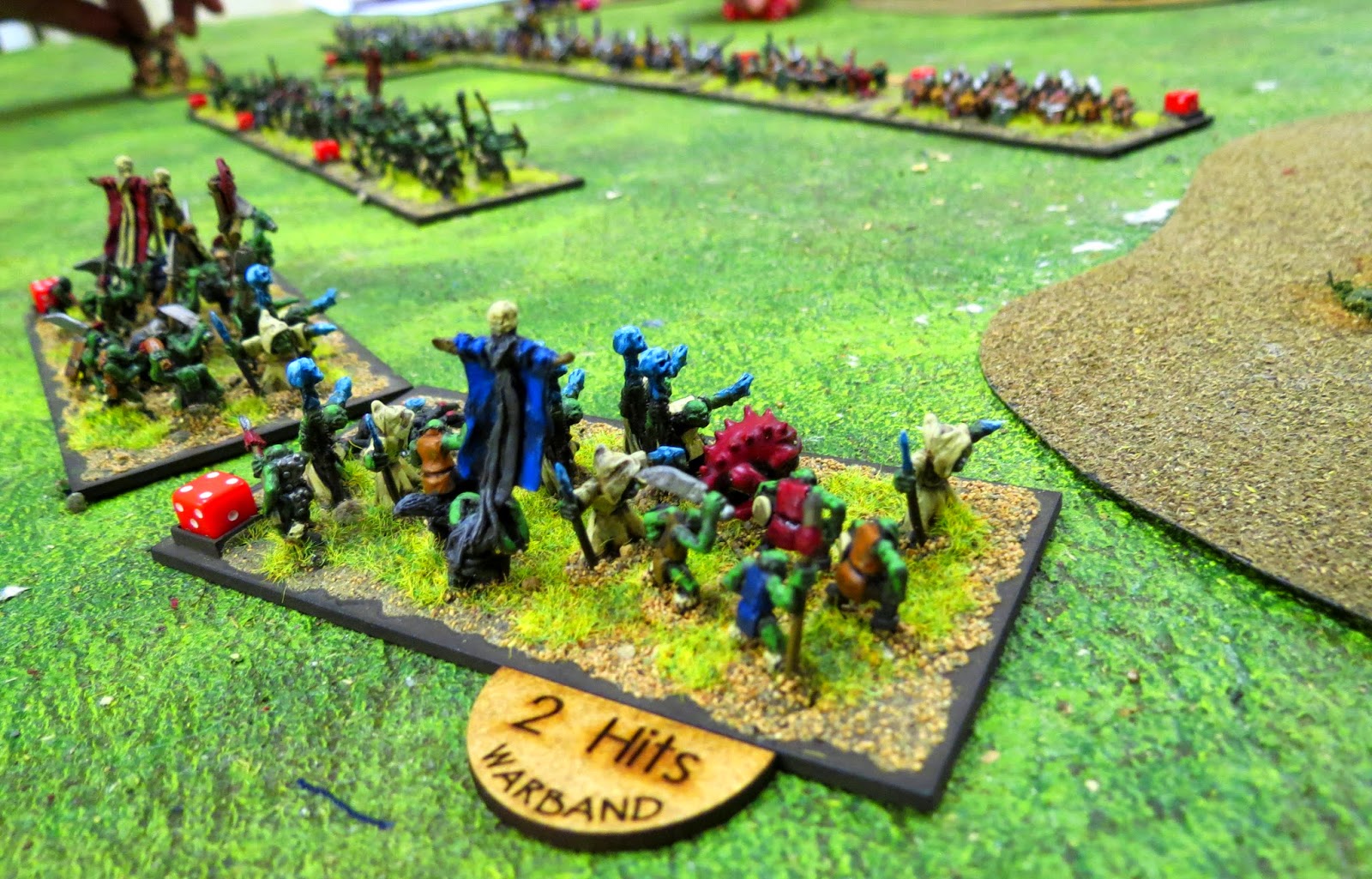 Eventually though, the goblins archery started to crack  the hill dwarves resolve, and the first of many units routed. 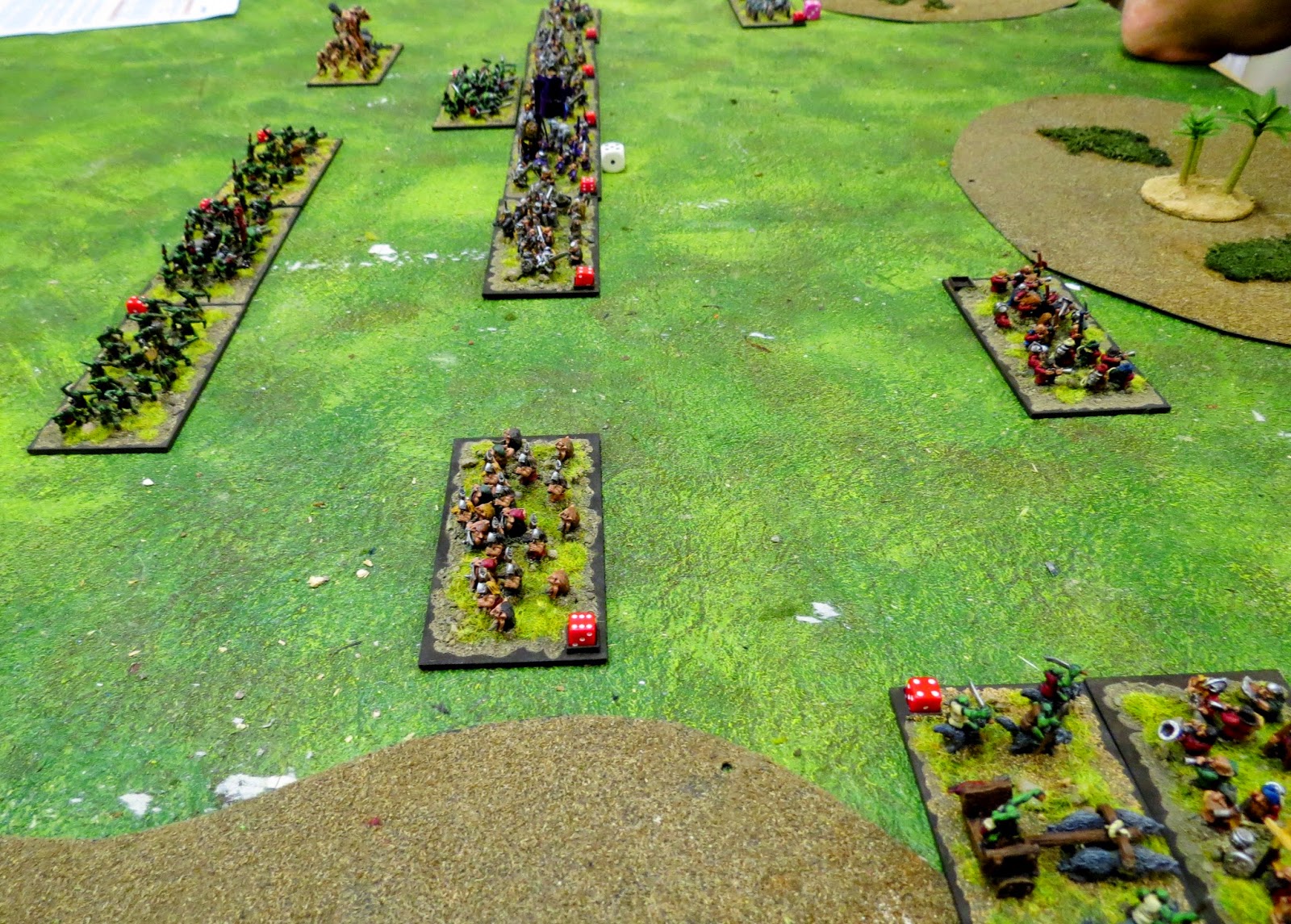 Running for the hills... 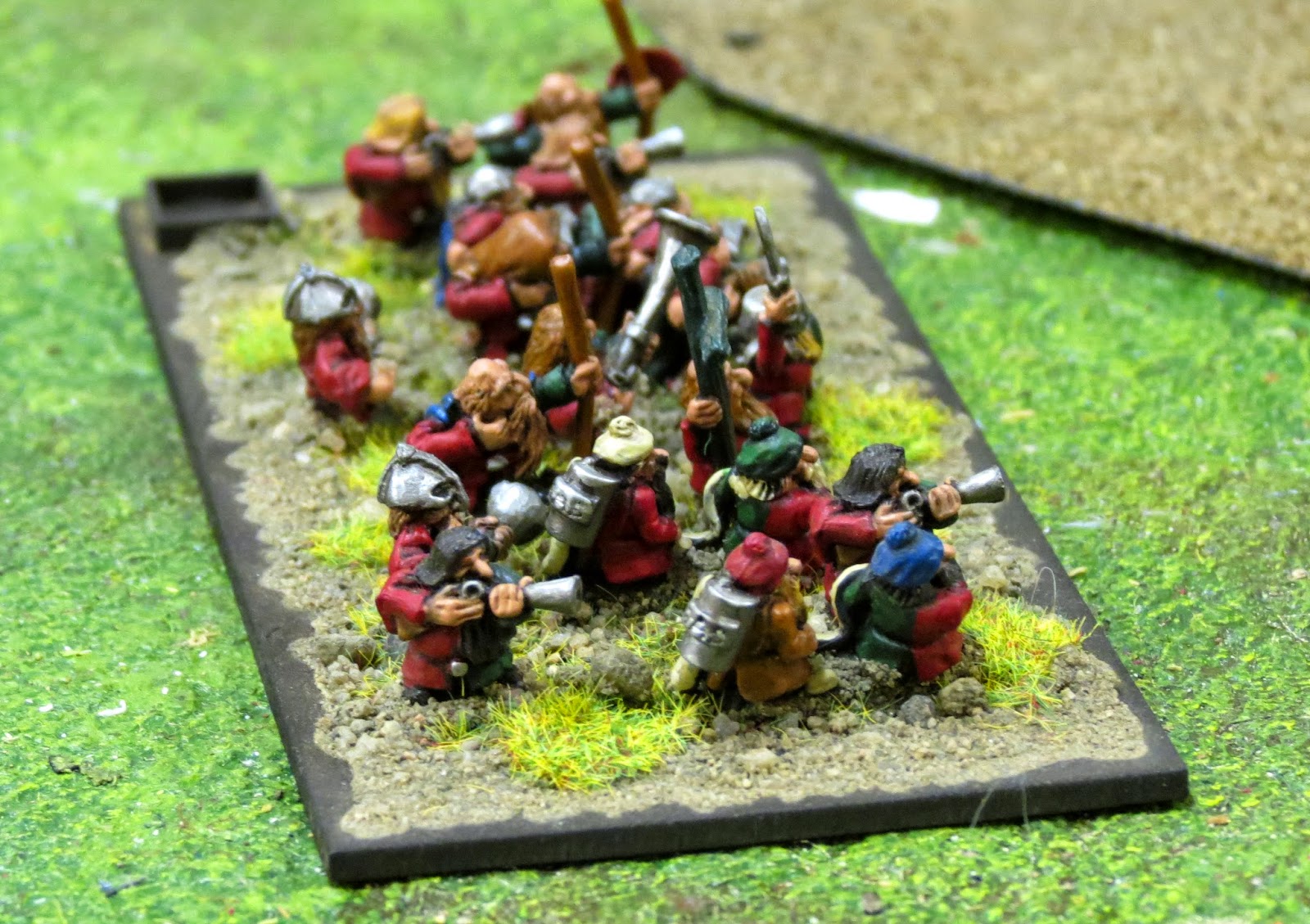 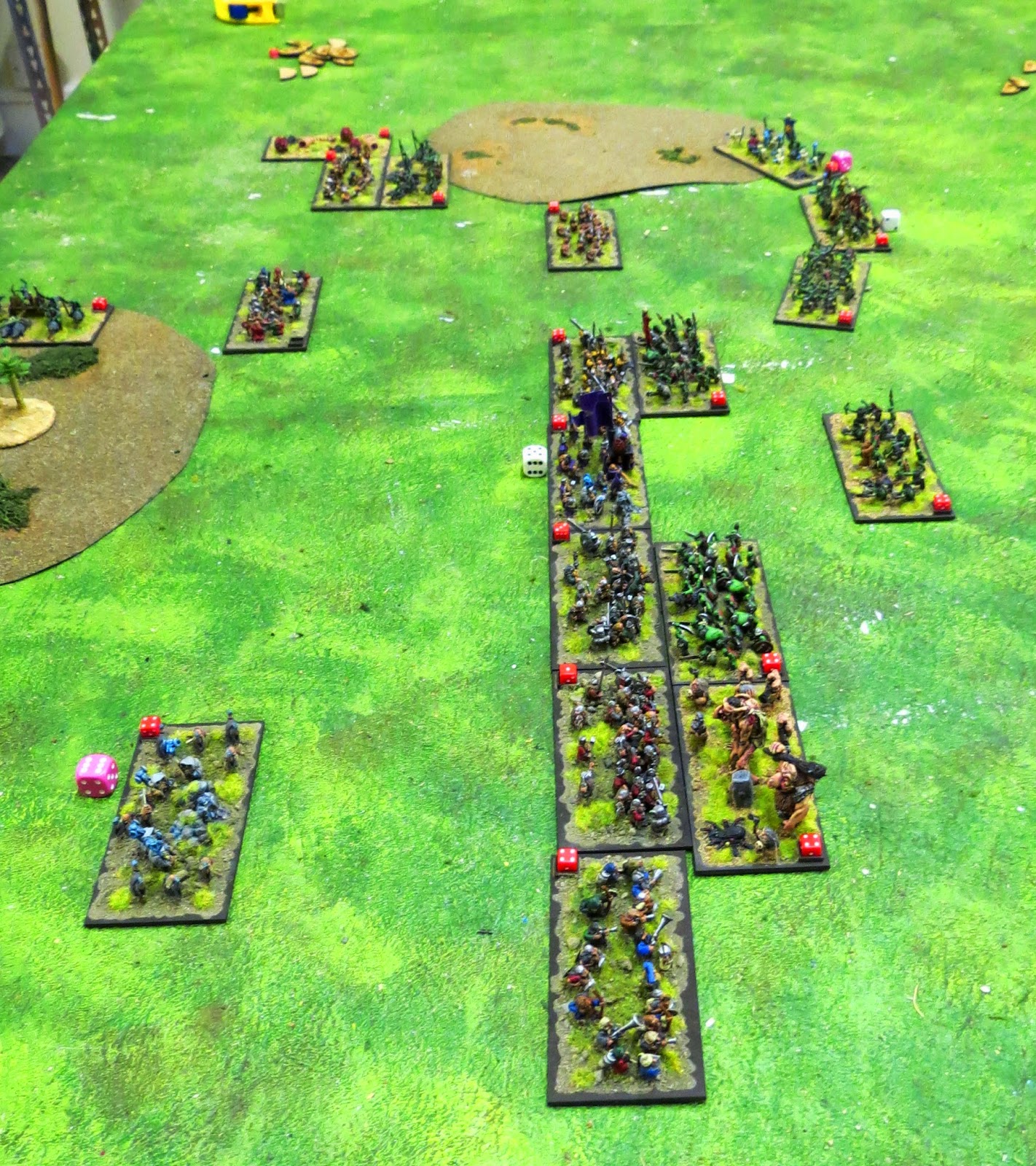 The flanking warriors are destroyed and the Honour guard falls back to cover the gap. 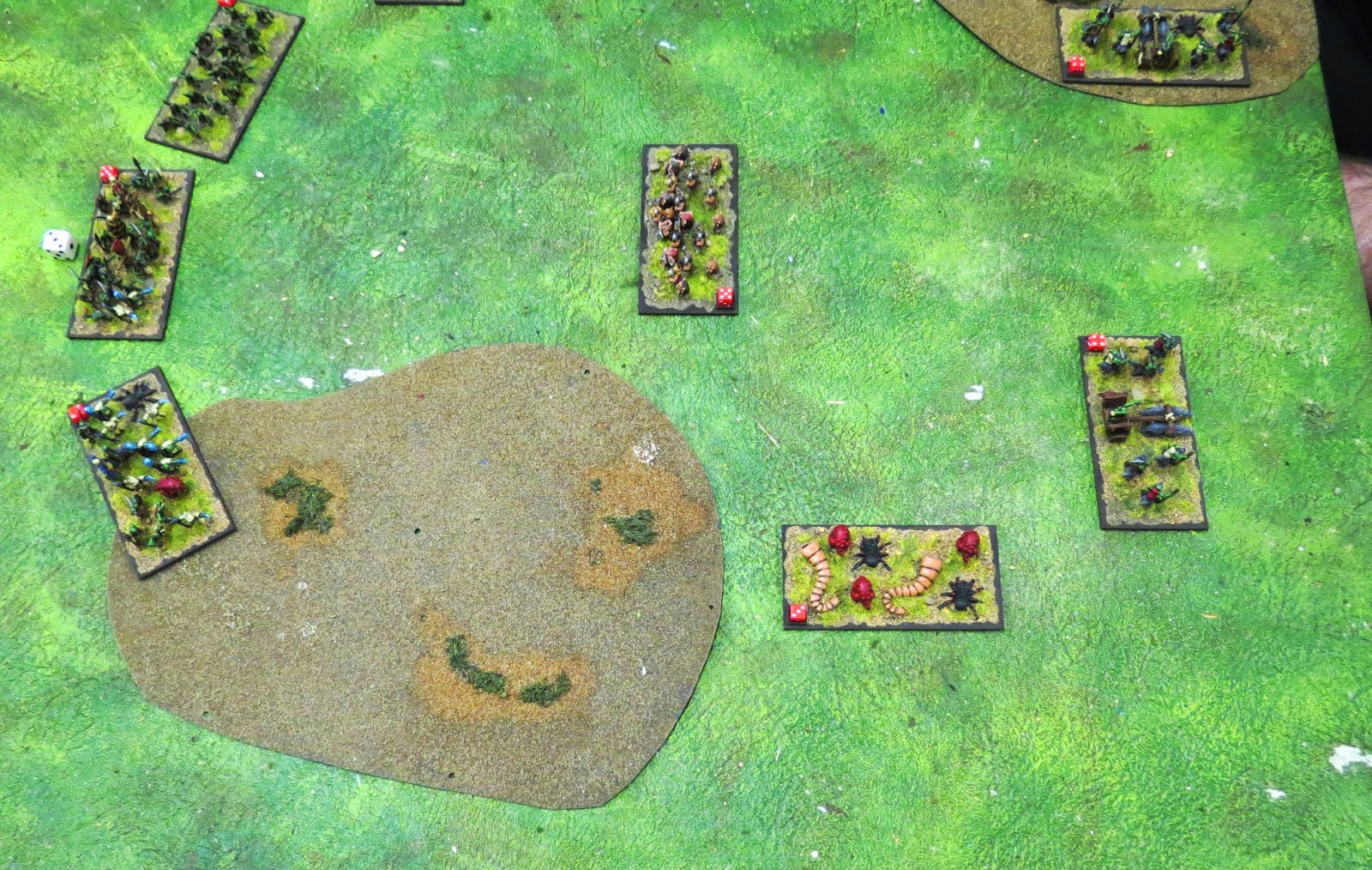 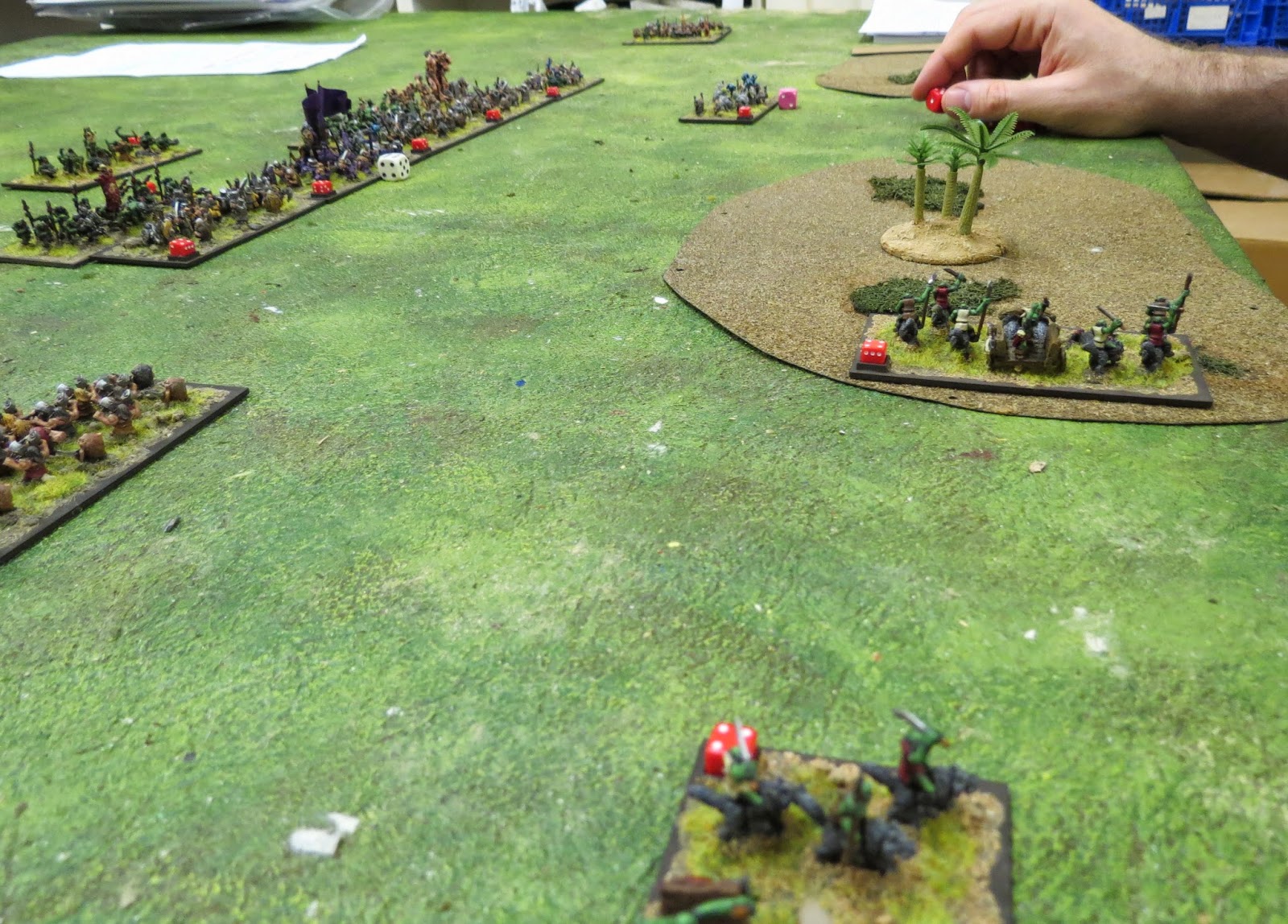 The goblin chieftain piles in to try to break the stubborn honour guard, and the dwarf king nearby throws command inspiration into the honour guard in an attempt to destroy the dwarf general. 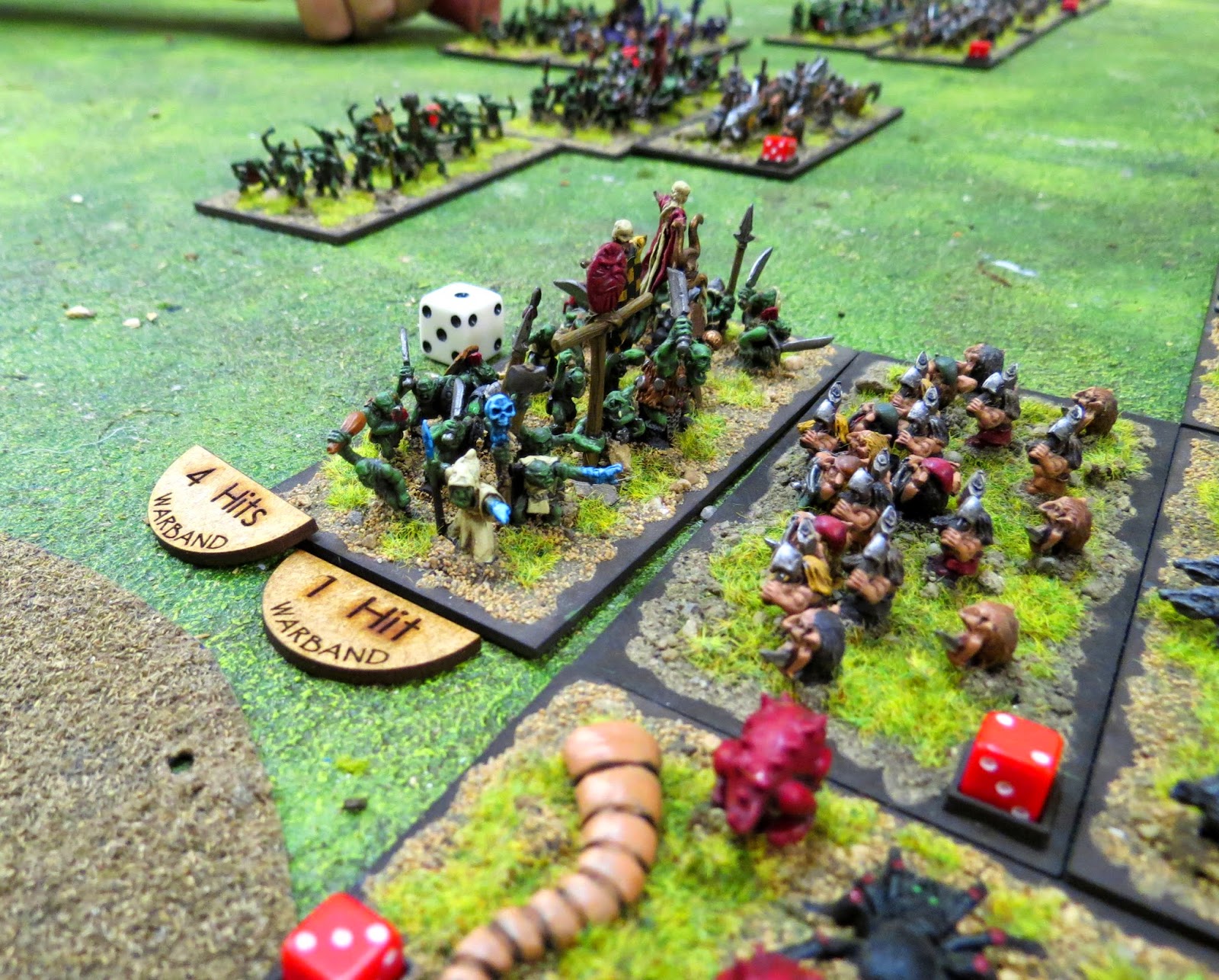 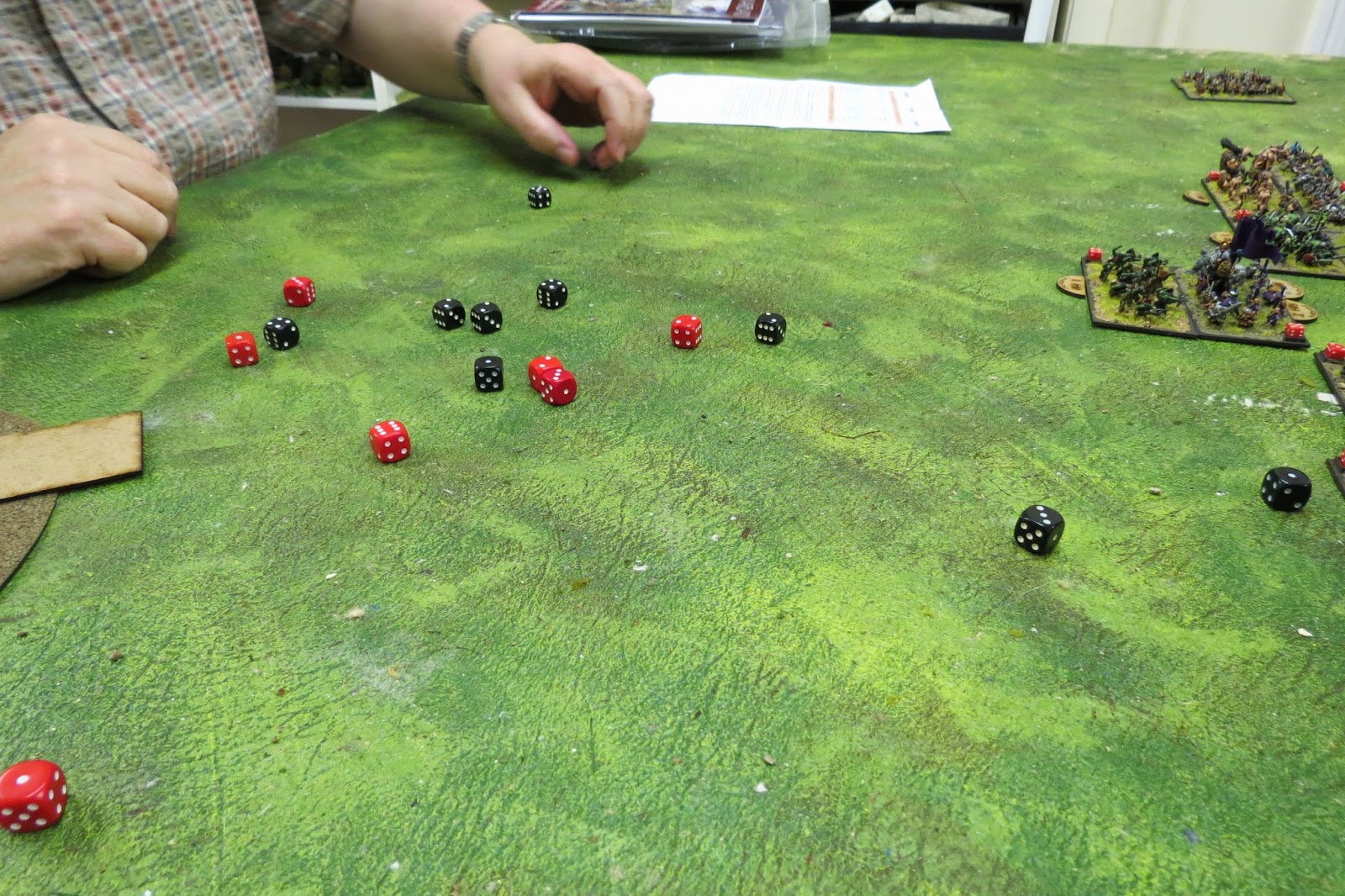 The tough little nuts hold on for another turn, but in the next fight, all 12 dice are successful!  The honour guard, unable to escape are cut down by the swarm of whooping goblins, but they do manage to break the goblin chieftain as consolation. 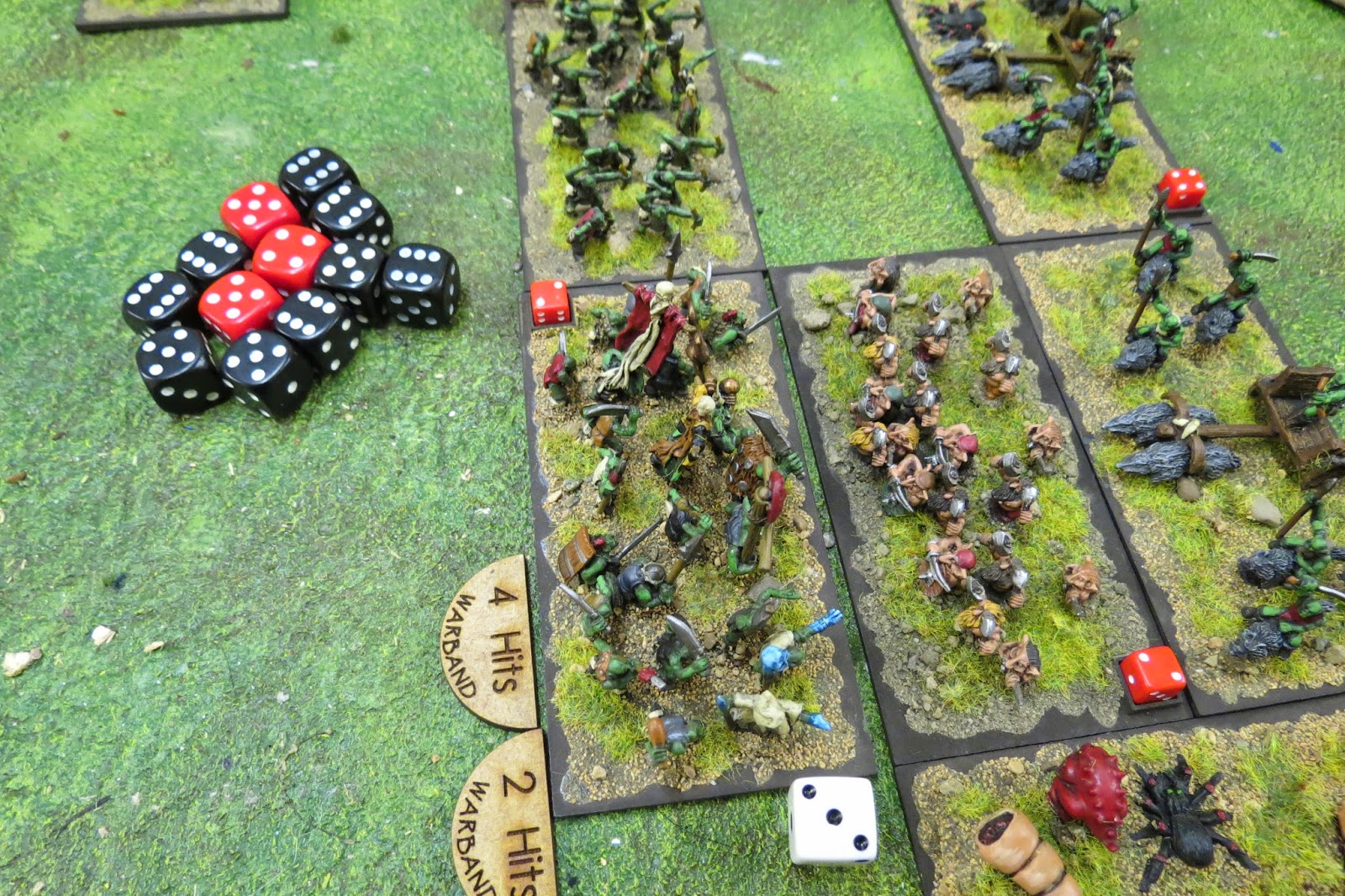 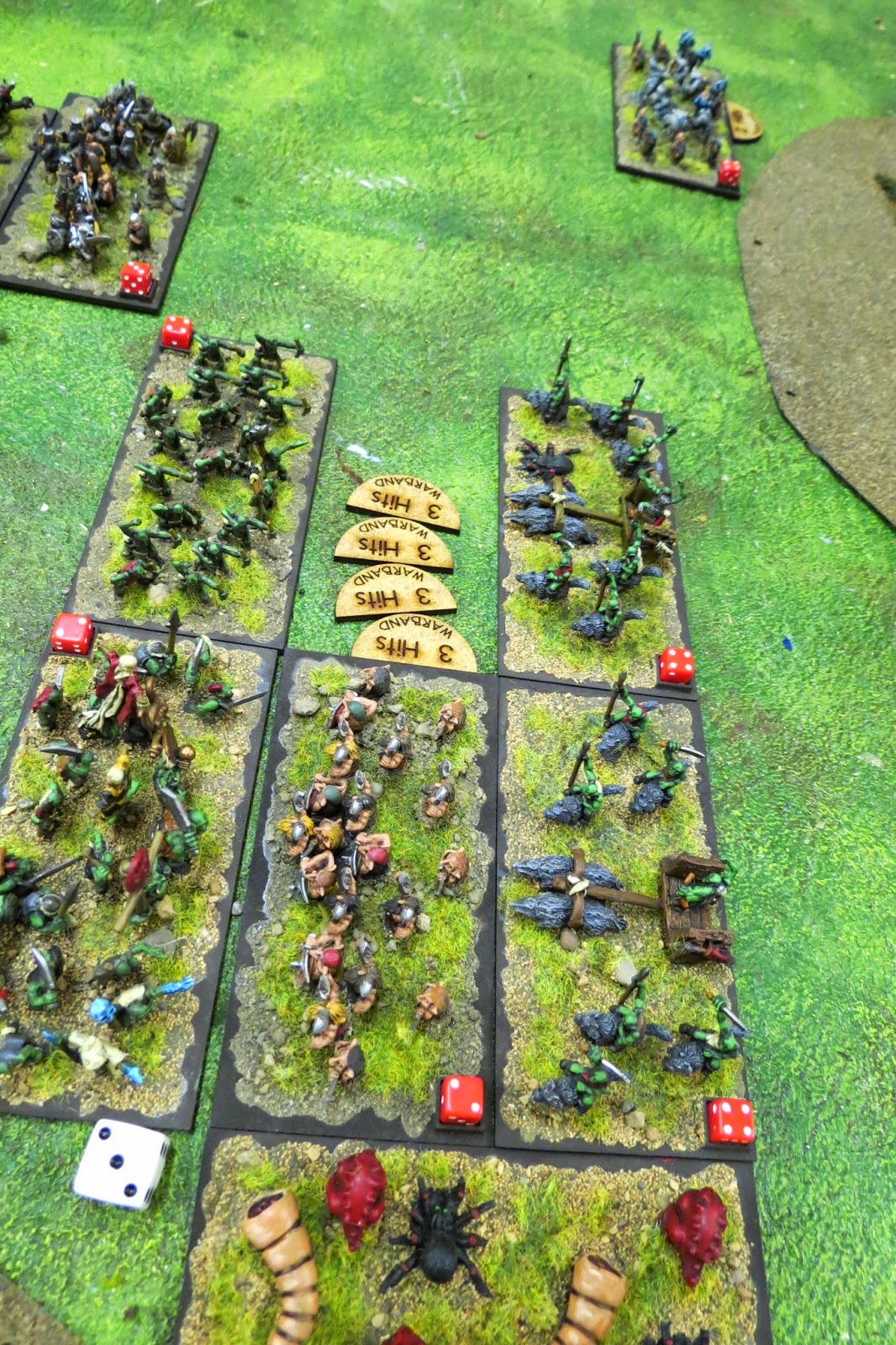 The dwarf flank collapses, and as the goblins inflict further losses and overring the prize, the dwarf line finally breaks and the army routs. 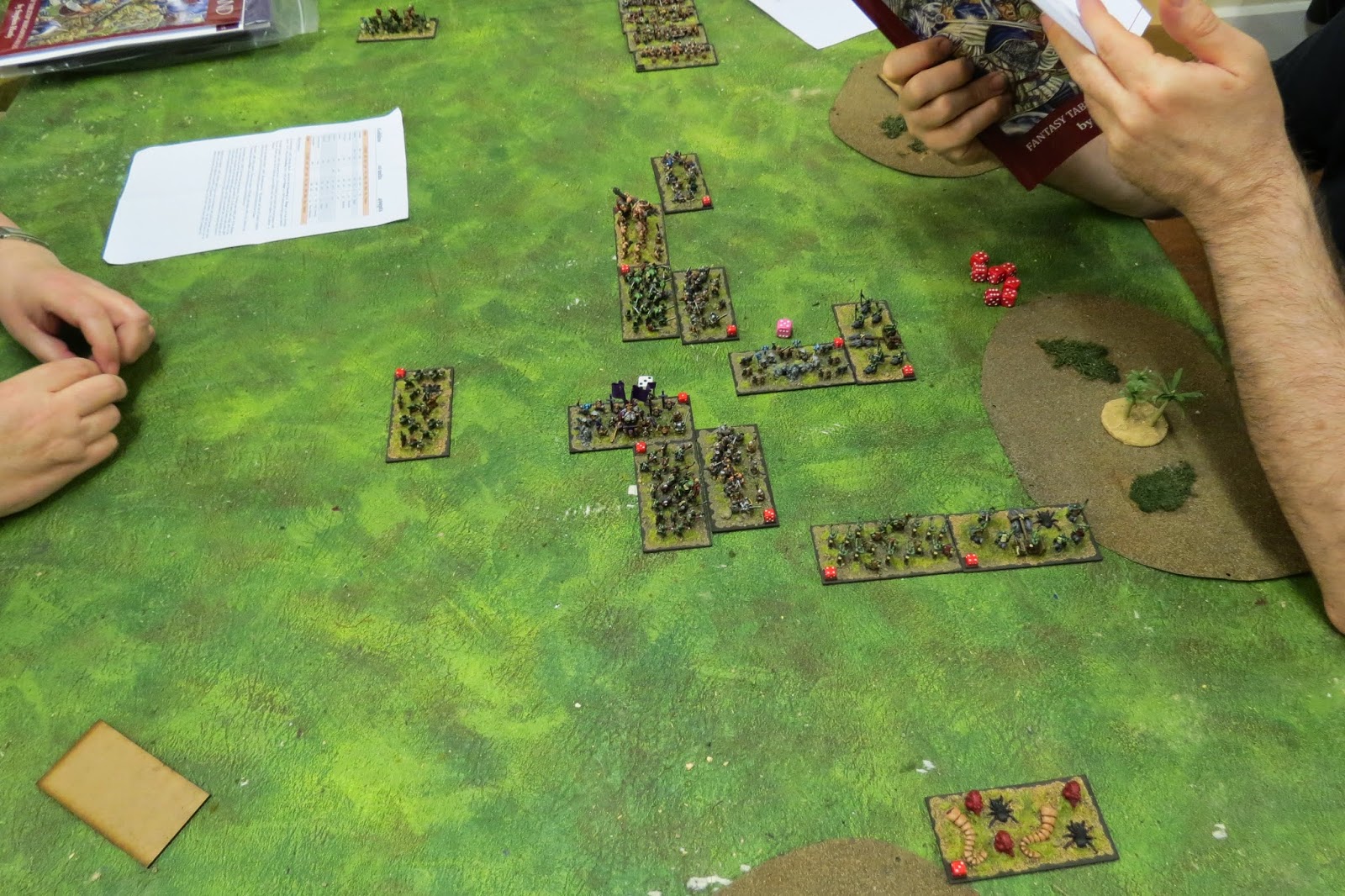 A fun, and hard fought battle came to an end with the dwarves losing 267pts and breaking.  the goblins lost their chieftain and a unit of archers.

Another fine outing for Warband.

That Teri Girl, Adam Loper and the state of gaming

This video interview with Adam Loper regarding customer perceptions of how Games Workshop has lost its way in a very exciting wargames market, is very interesting and well worth a look.