And so, here we are at the final game of our opening "escalation tournament" and our armies are at 1750pts.

So what did I add, I don't hear you ask?  Well, in compliance with out tournament rules I had to restore the Myphitic blighthauler to my roster, a unit I've affectionately termed "the snuffler demon".

I perked up a few units here and there, and added in a unit of 10 cultists.  As expected they were pretty much just bullet magnets and lasted about 4 milliseconds.  The daemon host and plague marines barely looked up from their filth-crusade to notice the fate of these wretches.

The main addition though was taken from the Chaos Daemon Codex: a Poxbringer daemon.  This character, as well as adding some psychic power, is mainly useful for buffing the strength of nearby daemons.  I expected much from him.  That said, I don't have a model for him, so used a proxy model.

So my final roster is as follows for 1750pts.

For my final battle I faced Tom's excellent Sisters of Battle again.  The mission saw the Sisters trying to push their way across the acrid, radioactive, misty ash-wastes, a foetid swamp of toxic sludge.  Krysler the daemon prince had moved his forces into the blighted wastes to block the advance.

Essentially, at the end of Turn 7, Tom needed one scoring unit (non-flyer) in my deployment zone to win.


I deployed in what has become my "standard array".

Typhus and the Malignant plagucaster set up within a shambling horde of poxwalkers.  The poxwalkers of course protect the characters, but Typhus increases their strengh and toughness by his presence.

My Daemon prince takes to battle flanked by his two Foetid bloatdrone bodyguards.  This flying cadre are my main strike force, able to move fast, hit incredibly hard and soak up unbelievably amounts of damage.  Wearing suppurating plate relic armour, the daemon prince is also able to kick out masses of mortal wound damage in melee.

On my left flank, the Plagueburst crawler tanks deploy this time ssupported by the new poxbringer.  He increases their strength, which will really help taking down tough opposing units.


Tom, deployed his Sisters, led by Celestine hereself, and their allied Knight ready to storm across the ash wastes and into my battle line. 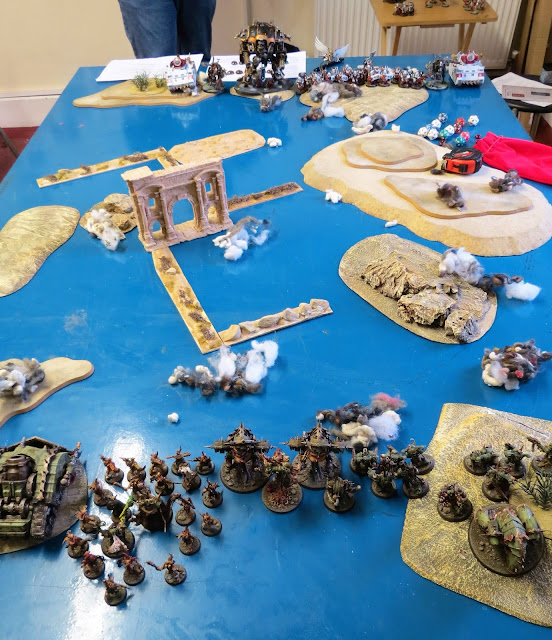 Of course, as I tend to do in most battles, I can't hold a position (even though I sort of need to here), and immediately go charging off to get to grips with the Sisters!

By this stage, one of the Sisters' Rhino transports has been destroyed, but the other is storm up our flank.  Gunfire crackles, and blight weapons spatter all across the line.

At this stage, as throughout the battle, victory rested very much in the balance.

The Sisters' knight moves up to dominate the centre of the battlefield and try to distract the Death Guard from the advancing infantry arrayed against him.  At this stage in the battle I was very worried.  Looking at what was coming I was concerned that I'd not be able to stem the tide and Tom would get at least something through my line. 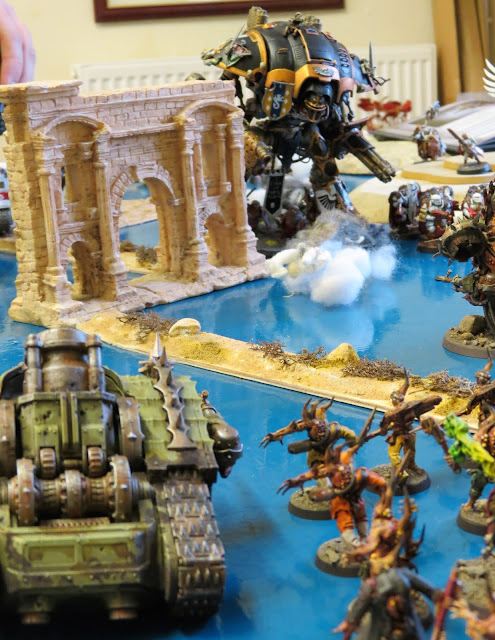 Of course, as I'd pushed forwards, it opened up my backfield for the Sisters to drop in some of their flying angels, armed with lethal flamer weapons.  Luckily they aren't scoring units, but still, they present a real problem for me, and I have to divert Thyphus and the poxwalkers to deal with them. 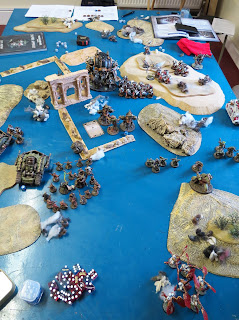 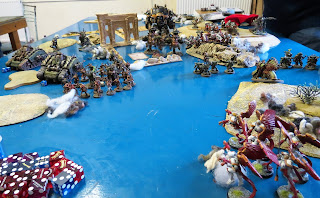 Meanwhile on the left flank, my daemon tanks (Plaguebusrt crawlers) struggle to finish off the Sisters that staggered out of the their destroyed Rhino transport.  This was a problem as one of the Ecclesiarchy's devastating Penitent Engines comes barrelling forwards looking to tear some daemon flesh asunder. 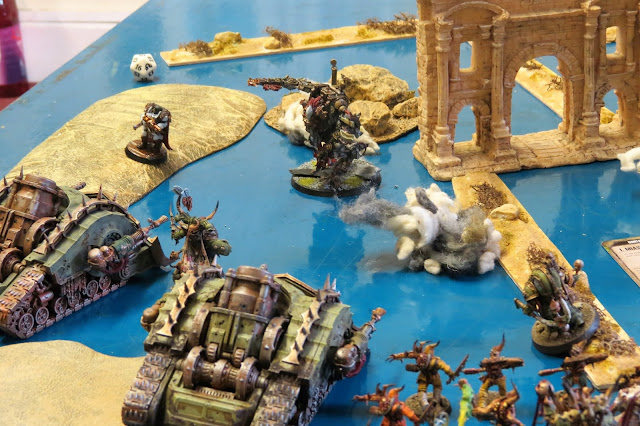 In the centre, Celestine leaps forwards through the mire's fug, a shining beacon of Imperial purity. 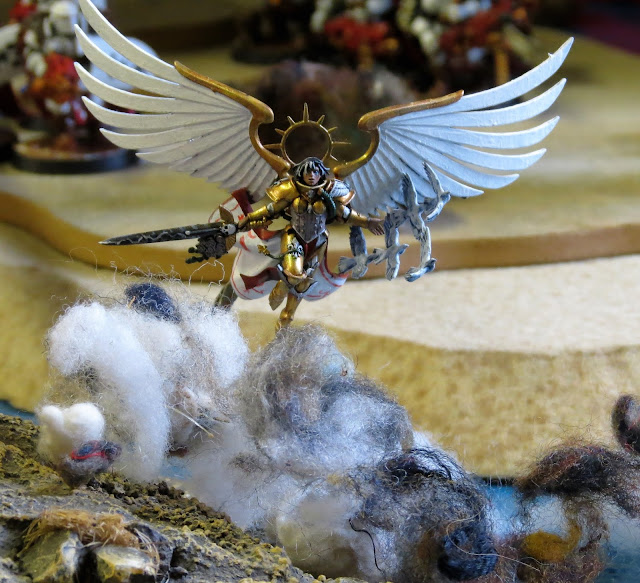 The close range exchanges in the centre are incredibly brutal, and in this fight we both agreed the battle swings.  Tom threw everything at my plague marines, but they weathered the bullet storm almost completely unscathed!  The diseased flesh re-kitting itself even as it is blown apart by bolter shells.

In return, my pestilent fire, and the psychic "smite" powers bring down the knight and gut the heart of the Sisters infantry. 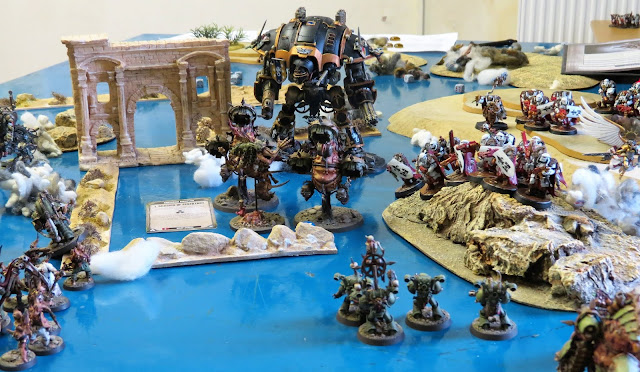 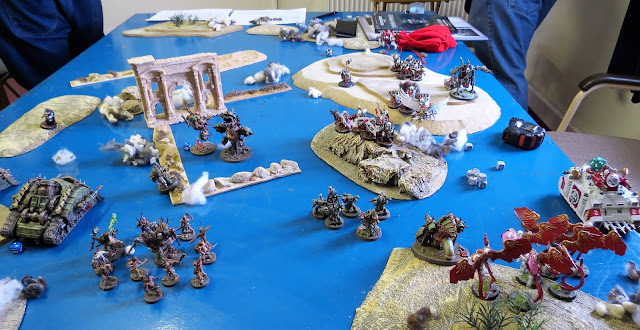 After two rounds of fighting, the centre is settled and the Sisters advance is stopped here.

But they have broken through on the right flank, and Tom moves infantry into my deployment zone.  I have to destroy them before the game ends.  With two turns left the game is still in the balance! 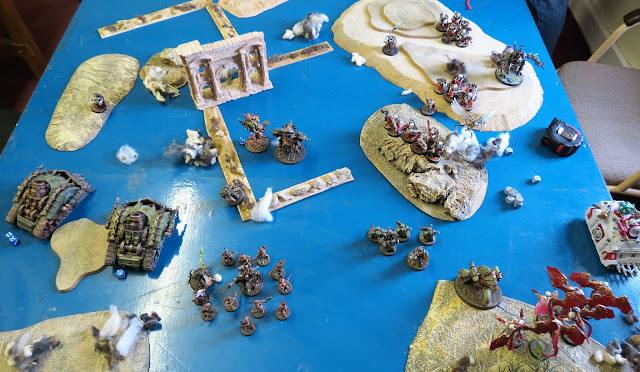 Typhus led the charge to eradicate the Sisters' characters that desperately ran to escape their pursuers and score the win. 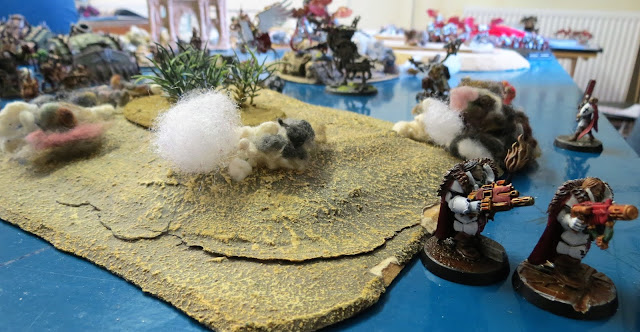 But it was not to be, and Typhus and the Malignant plaguecaster slew their quarry with psychic smites and I took the win alsmost at the final gasp! 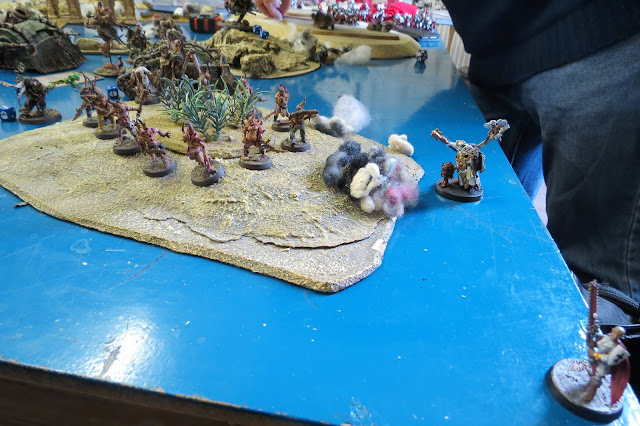 It was not without problems however, and both Typhus and the plaguecaster invoked "perils of the Warp" during their casting, almost killing themselves! 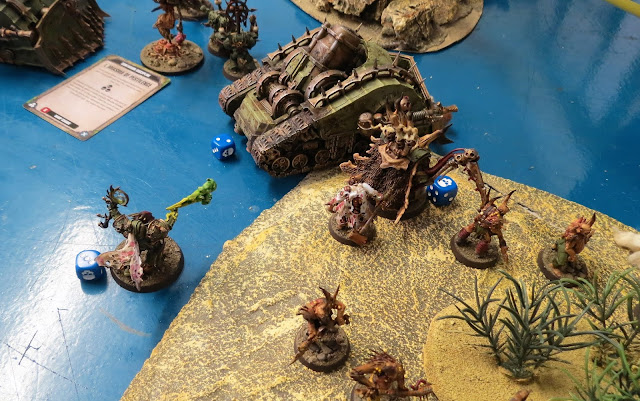 Tom and I shook hands at the end of an incredibly close and very enjoyable game - a fitting end to the campaign.

The rest of the battles on the day.

The Drukhari airforce took on a spectacular Tyranid swarm in a very close battle for control of the industrial yards. 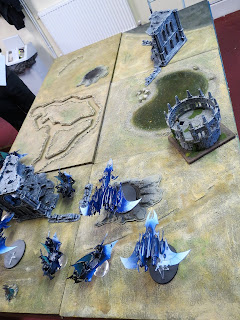 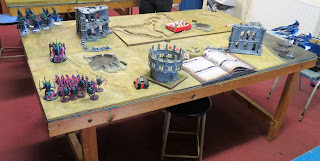 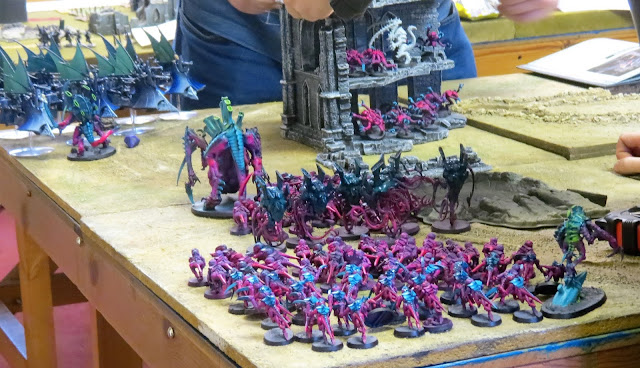 And the two Militarum forces (loyalist and traitors) clash in a brutal battle that saw the loyalyists throwing the towel in early. 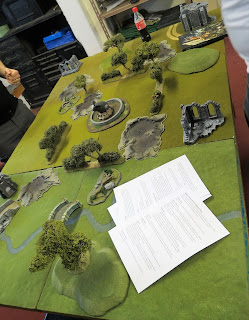 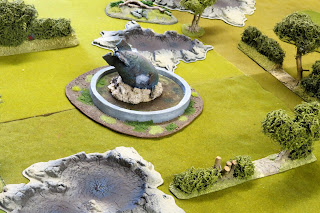 The battle was apparently decided by a brutal charge from the loyalist ogryn assault troops.  This large unit of large "abhumans" has caused most opponents a lot of trouble.  They hit incredibly hard and can tank a ton of damage.  Real wrecking crew and the stars of the Militarum in our campaign. 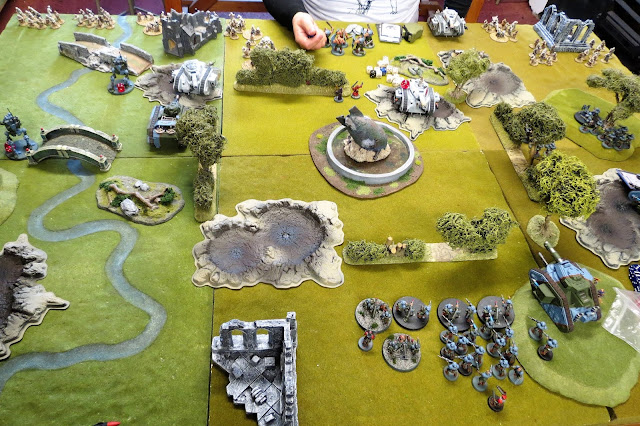