In Her Majesty's Name: The Hunt for Dr Moreau

It’s been two years since the Martian invasion was stopped in London.  The British Government told the world that it was the germs of Earth that stopped these invaders.  This wasn’t a lie, but it wasn’t entirely the truth.  The germs were actually a bio-genetic weapon produced in the Imperial Genetic Laboratories at Porton Down under the auspices of Dr Moreau.

After several attempts on his life, Dr Moreau is now a paranoid, haunted man convinced that the British Government is trying to ‘silence him’.  He has taken his research and fled to the fractured land of Europe where he’s been hiding in a small Dutch town for the last few months, practicing his vivisectionist experiments on the locals.

Prussian spies in the region have identified him and now a small military delegation led by the Stromkult adherent Graf Frederic Ichs has approached Dr Moreau to offer him employment with the Preußische Wissenschaftliche Akademie [Prussian Scientific Academy].

British Intelligence Section 6 have become aware of this meeting and has sent a reinforced infantry section under Captain Mainwaring to apprehend the fugitive and prevent his potential defection to the Prussians.

Although not yet convinced to join the Prussian cause, the arrival of the British has encouraged Moreau to at least go with them to escape Her Majesty’s redcoats!

The battle begins at High Noon outside a local watering hole… 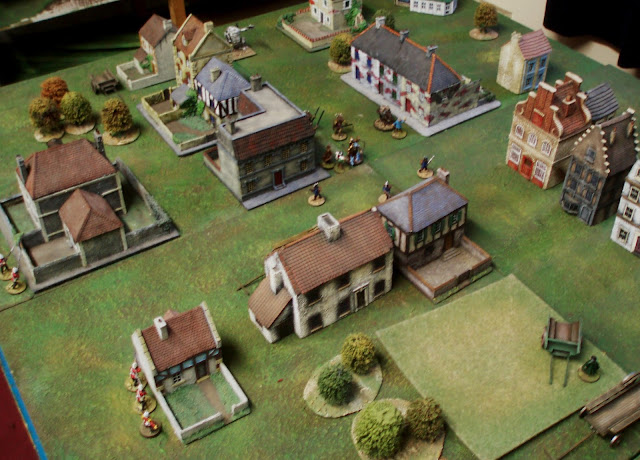 The British soldiers sneaked in quietly from the south, while from the east Peregrine Caruthers (Agent 007 of Section 6) made his way across a cart yard.  To the east, Private Pike sat quietly waiting in his Bulldog walker... 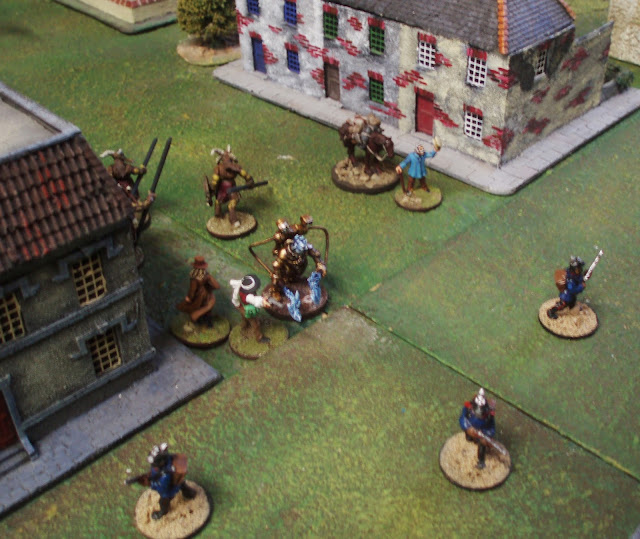 Graf Frederic Ichs [a Stromkult adherent] emerged from the drinking house with Dr Moreau, and his assistant Montgomery (who is slightly worse for wear on Dutch lager).  A local greets them as he wanders by with his pack horse and the Prussian soldiers fan out to the east make sure the way is clear.  To the west, Dr Moreau's hideous chimera 'beast men' mill about looking surly. 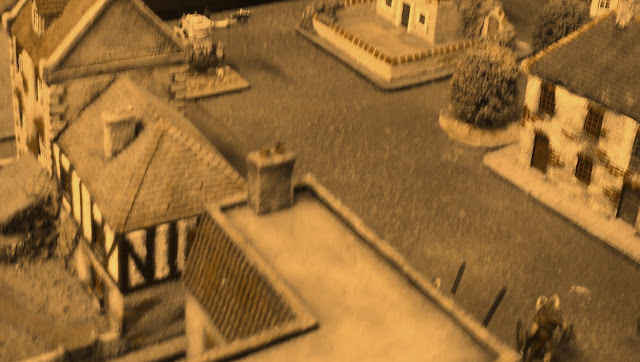 Suddenly, the party spots the British Bulldog up the street and all hell breaks loose.  Private Pike fires up his Bulldog and black smoke belches from the exhaust stacks. 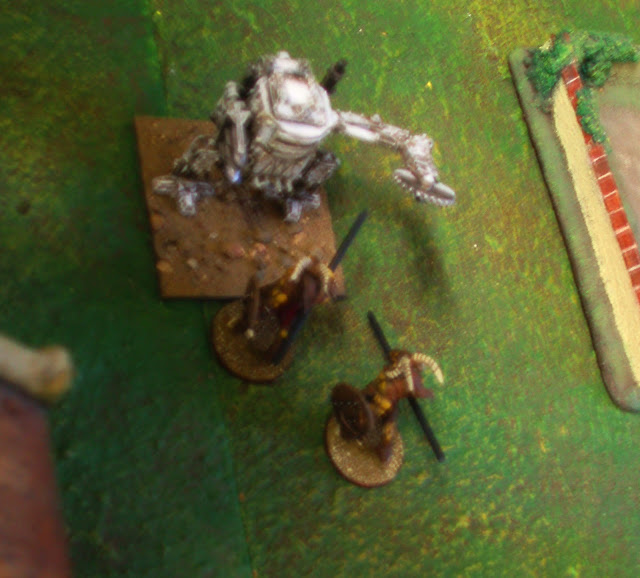 Enraged, the beast men charge straight towards the metal monster intent of protecting their 'father' Moreau.  Not wishing to waste his precious Congreve rockets, Pike fires up the vicious whirring combat saw and despite their brave efforts, the chimerae are shredded in a cloud of scarlet... 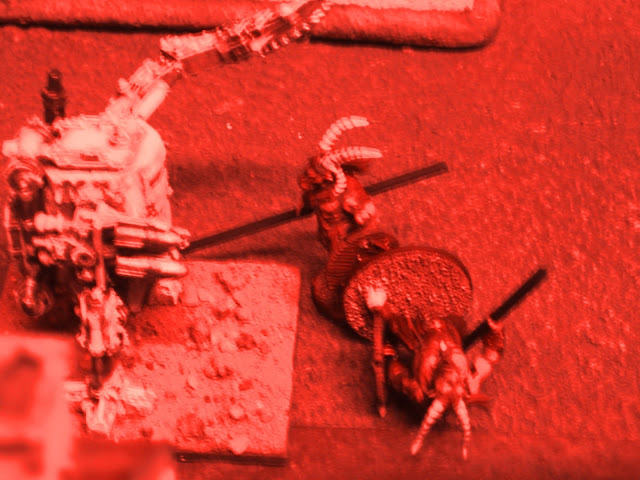 Meanwhile, over on the main road, the Prussian and British soldiers hunker down in cover and exchange rifle fire.  As the drink-addled Montgomery comes swaggering into the fray looking for someone to bash, the Prussians get the better of the British as their bullets tear through the brave lions' armoured tunics. 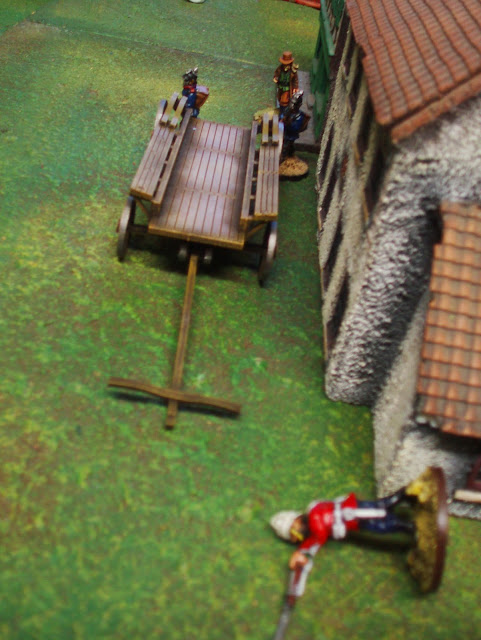 To the east, Montgomery slinks down a side alley and draws his knife as he stumbles into a desperate brawl with Peregrine Carruthers.  As the skirmish plays out around them the two protagonists struggle, slash, stab, and wrestle each other to a standstill. 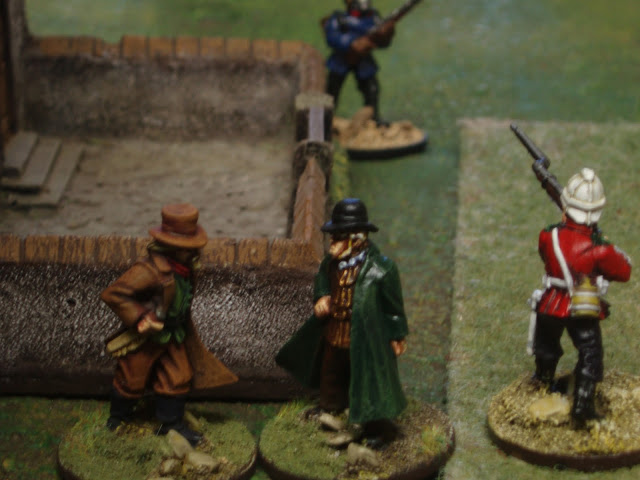 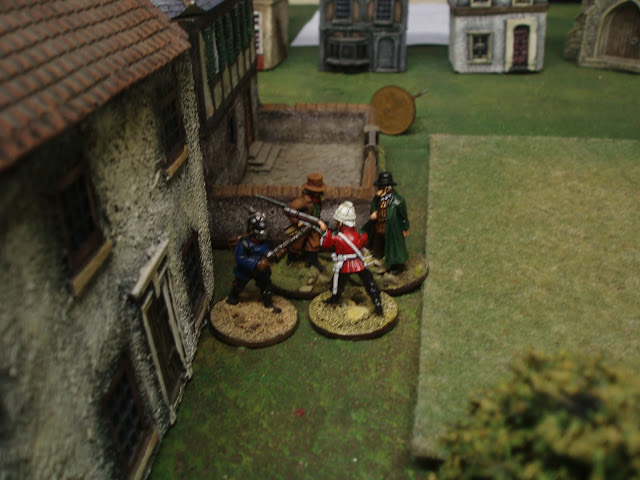 Even when British and Prussian soldiers fence and spar about them,  Montgomery and Carruthers barely look up from their fisticuffs!

To the west, Graf Ichs leads Dr Moreau through the back alleys, seeking an escape route.
Moreau questions his decision to treat with the Prussians and considers taking a pop at the energy-soaked freak. 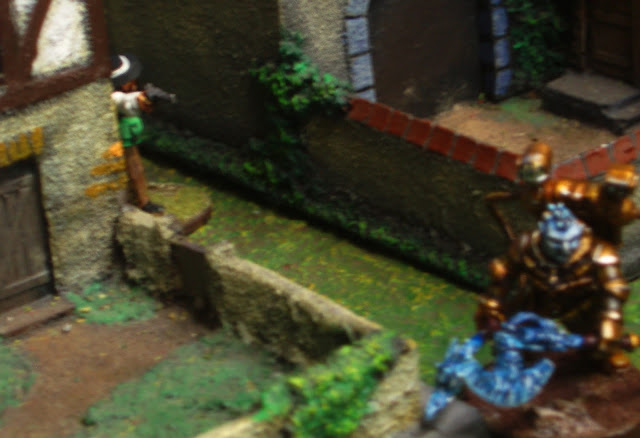 But the British laying in ambush change his mind and Moreau's remaining beast man (Gerald) storms forwards to show the Tommy Lobster how to fight. 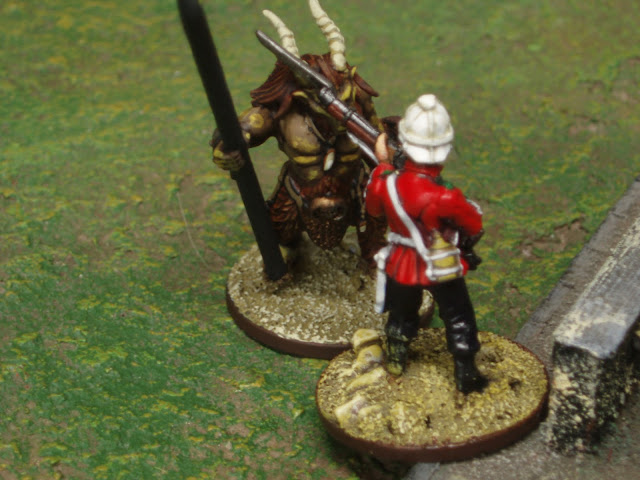 Although his training served him well, Private Jack Scarlet's beautiful British bayonet drill was simply no match for the brute force of the Gerald the beast man and he was soon knocked aside. 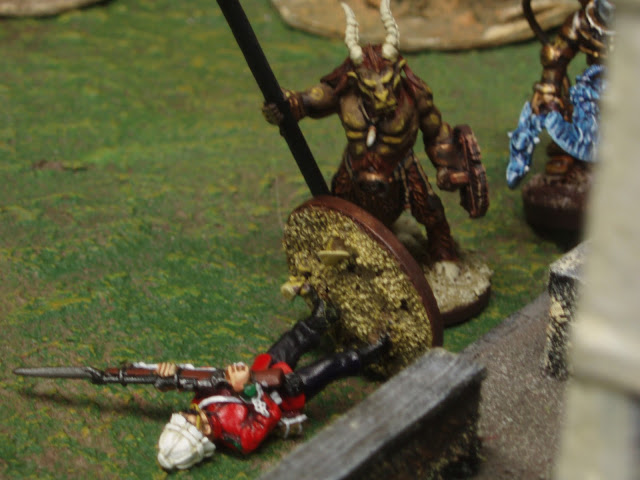 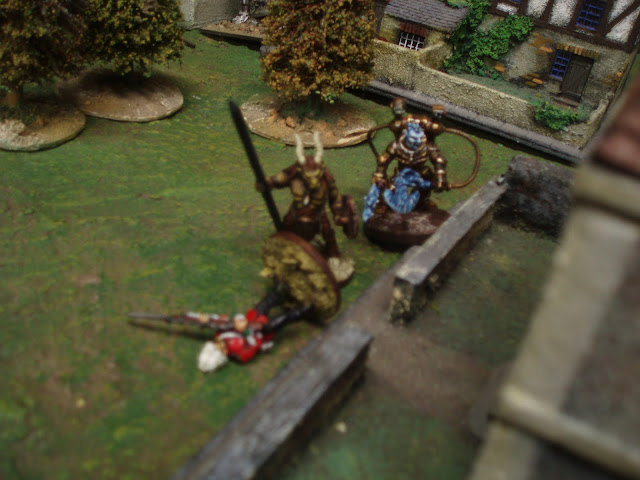 As the horrid chimera pushed on to the clear the way for Dr Moreau... 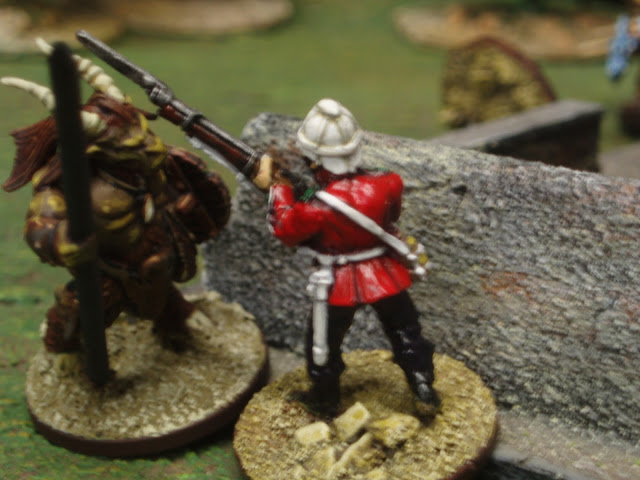 ...Private Pike powered his Bulldog steam walker through the copse of trees to ambush the dreadful Prussian Graf.  In a vicious and spectacular fight, The Bulldog walker's Congreve rockets were smashed off in a shower of arcing axe-hits, and it's leg-piston hydraulic tubes sliced through so that it could not turn right.  But the walker was too much even for the fearsome Stromkultist and the whirring death-saw sliced the Prussian noble down. 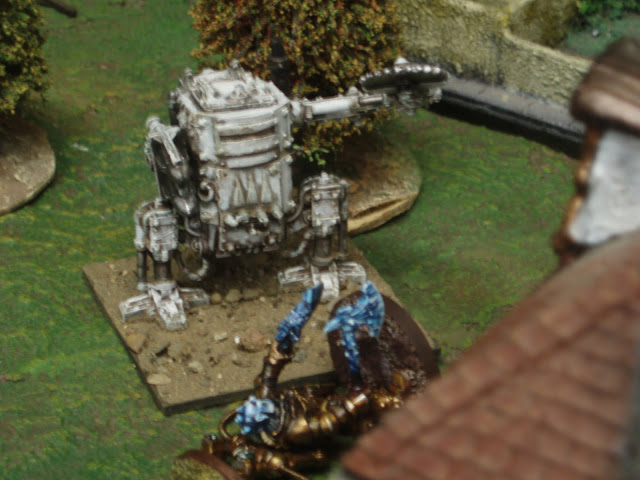 Dr Moreau panicked at the sight of the Bulldog and staggered off east through someone's back yard, sending their dust bin flying. Captain Mainwaring was still lurking about to the south on the main road, but spotted Dr Moreau's approach too late.  He discharged low-intensity crackling energy from his arc rifle in an attempt to stun the good Doctor, but his snap-fire missed.  Moreau returned fire and dropped the Captain with a single shot from his pistol. 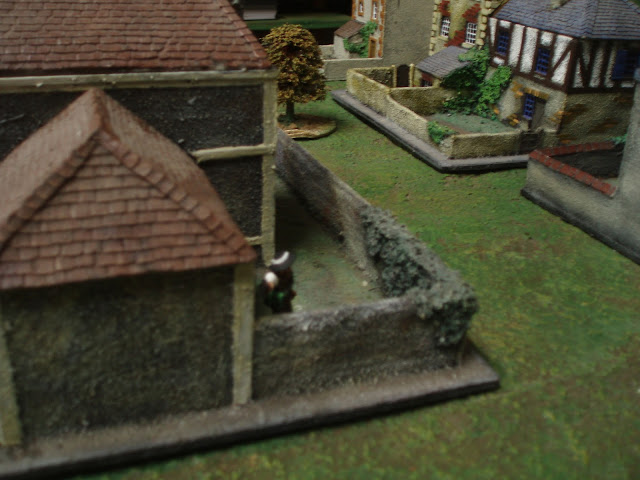 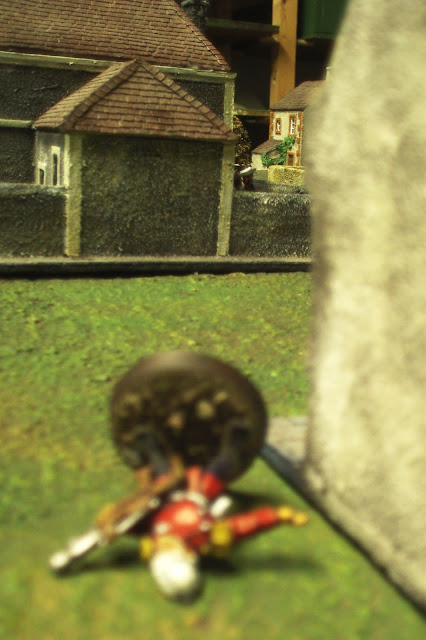 The way was now open for his escape and Dr Moreau slipped away from the British clutches once more...

‘Graf Ichs my friend, take a section of soldiers.  Our brave agents have arranged for you to meet a British scientist called Moreau.  Convince him of his desire to join our cause and get him back here safely.  And Ichs, take care, that part of Holland is Tommy Lobster territory so they will probably have forces at the ready’.

‘I say Mainwaring, there’s a boffin called Moreau over in the next village.  Seems this cad is wanted at Her Majesty’s pleasure.  This is Caruthers 007 from Section 6; escort him over there to pick up this bench-thumper, there’s a good chap. Oh, and Mainwaring, rumour has it the dashed Bosh are lurking about over there too.  I’ve told Hobart to release one of his Bulldogs to you; Corporal Churchill’s got it ready in the clanker yard’.

This was our first IHMN game and I have to say its a very good little skirmish game.  The play is fast and intuitive, with simple mechanics that don't get in the way, while demanding some interesting tactical decisions.  It uses a standard IGOUGO turn sequence, but you alternate by individual figure.  This makes for some interesting exchanges of which figure you choose to activate and in what sequence.  Most task resolutions are quick and simple to remember (stats+modifiers vs. target number) which means the games trot along fairly quickly.

The real strength I think is in the flexibility of the rules in allowing you to build any force ('company') you like.  They include a points system that means you can find a figure you like, put some stats together for it, work out its points cost and away you go!

EDIT: Diakon over on the Lead Adventure Forum asked for close ups of Graf Ichs, so i'm happy to oblige (within the limits of my daguerreotype machine...) 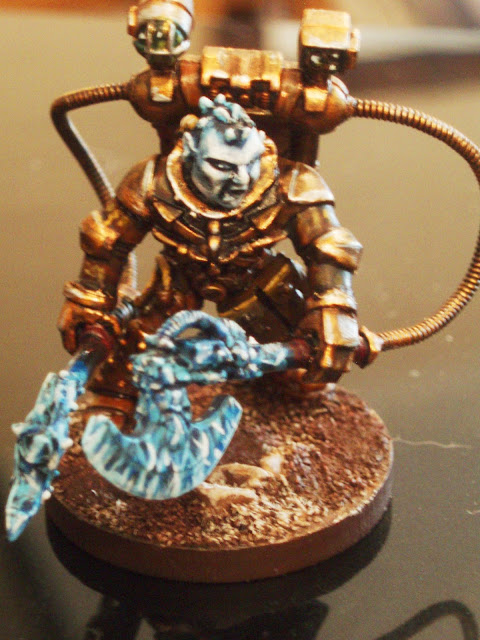 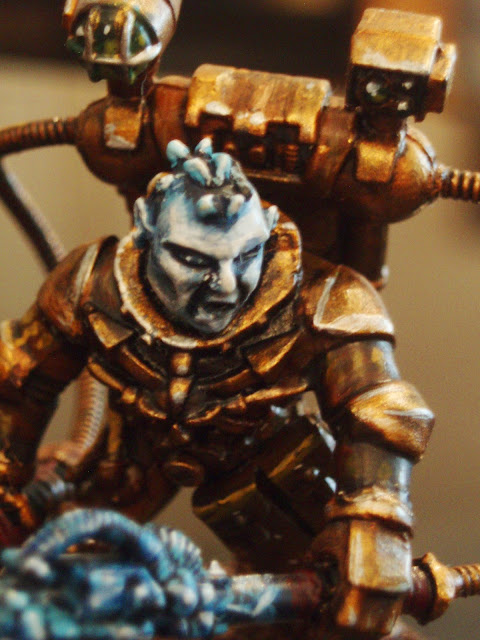 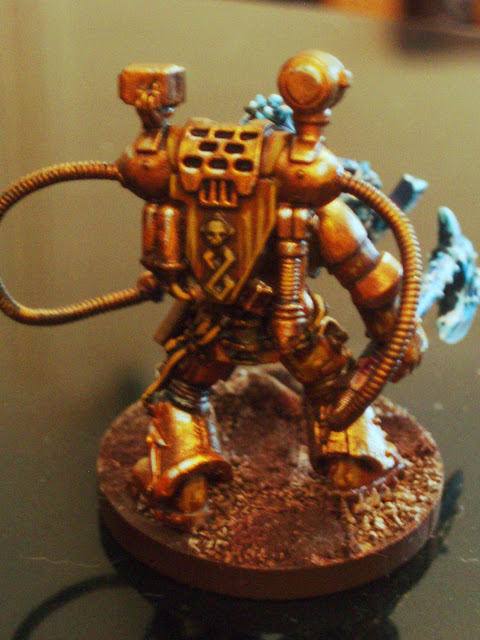