I guess I should engage in a bit of throat clearing as its been a good while since I posted to my blog.  I've actually been really busy with real life, other less blog-friendly games (like board gaming and roleplaying) and also working on a wargames project that has taken a good deal of my time and attention.

And of course during that time I've also been wargaming, but I've neglected the blog here for various reasons.  I shall take the shame.  I also noticed that the last few posts showed the start of a few projects without then covering the finish.

A good while ago, when Warlord first released Bolt Action my group and I gave them a go.  We were in a different place regarding our gaming interests at that time and the rules got shelved.  However, of late we've been playing 'bitty' games, not really settling on anything and we decided we wanted to put something on the table that would be tournament based, good fun, simple, with lots of pretty toys, decent rules, and gaming that encompassed list building, as well as good solid game tactics.

We tried a few games that didn't quite fit the bill, including Bolt Action.  Then we played Bolt Action again.  And again.  And we looked around at our collections and said, 'hey remember those figures we bought for Rules of Engagement and never used?!

Yeah, so...its safe to say we've been playing Bolt Action pretty solidly lately, with proxies to learn the rules as we build up our tournament forces.

As ever, I've gone for Russians.

We're playing 1000pts, so I've been steadily building a 'core force', plus a bunch of options to try out.  I suspect, as ever I'll end up with far more than I'll ever actually field!  Hehe...

So these figures are a mix of Black Tree Design minis that I bought a few years ago, some Copplestone stuff and the maddeningly fiddly Warlord plastics.  They all mix in quite well which is good.

Here's my main force so far.

The Lt is accompanied by a flag-bearer.  Their role is mainly to ride with the assault units and keep them going forwards, hence they are armed with SMGs.


The platoon is supported by three teams with anti-tank rifles.  I've found them to be a really useful and flexible part of the force, able to take on light armour, enemy infantry dug in buildings, and also snipe and pin if no other targets present themselves.  Spread out across the battlefield, I can usually get at least one of them firing into the side or rear armour of an enemy tank!  Hehe...Also they are easy for the opponent to miss in the chaos f a battle and they have popped up from cover unexpectedly a few times. 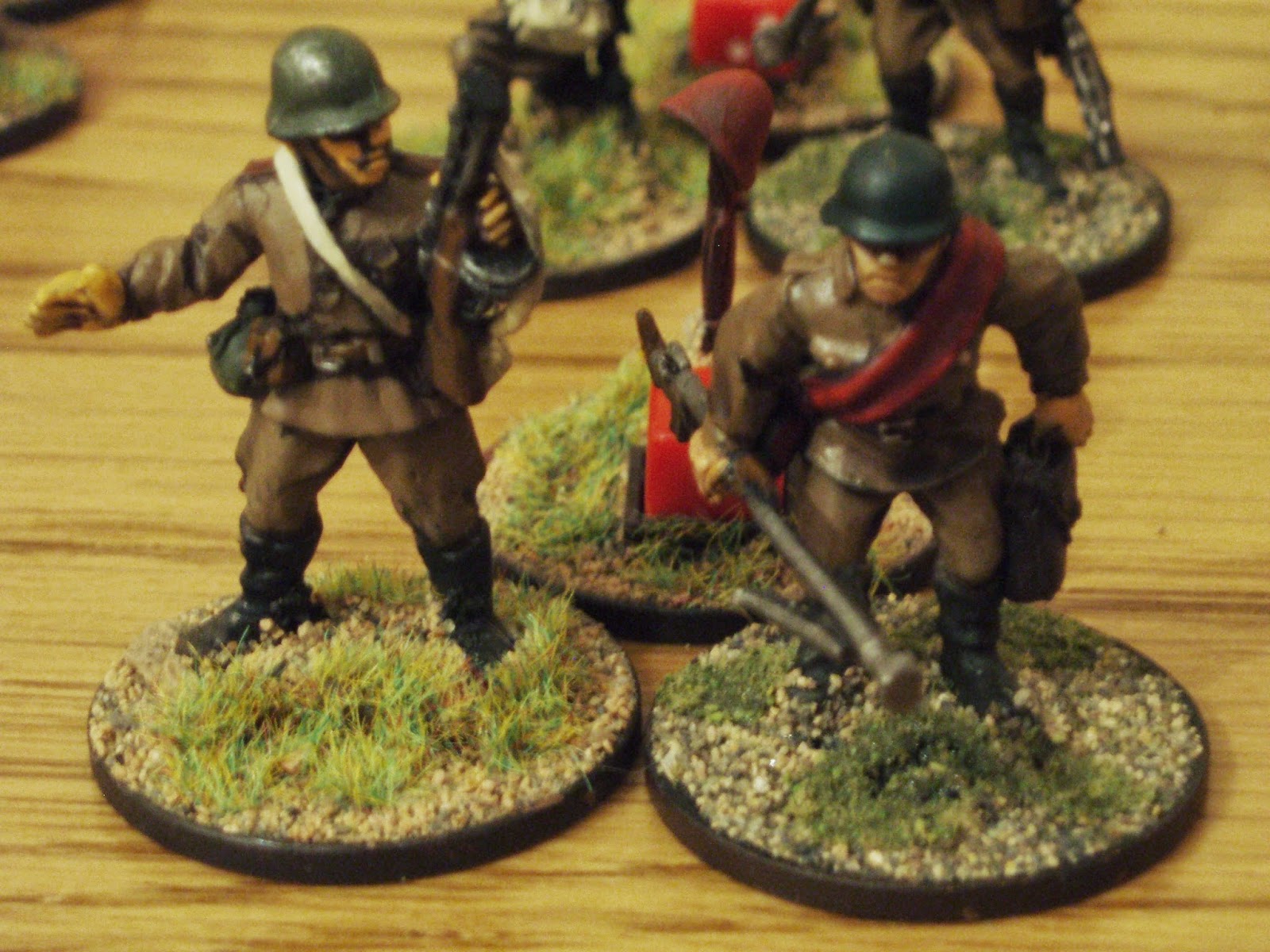 My main armour is a T-28, which is a monster infantry killer!  As I've not been able to find a T-28 model this is a Copplestone Vickers MkIII - basically the same tank anyway. 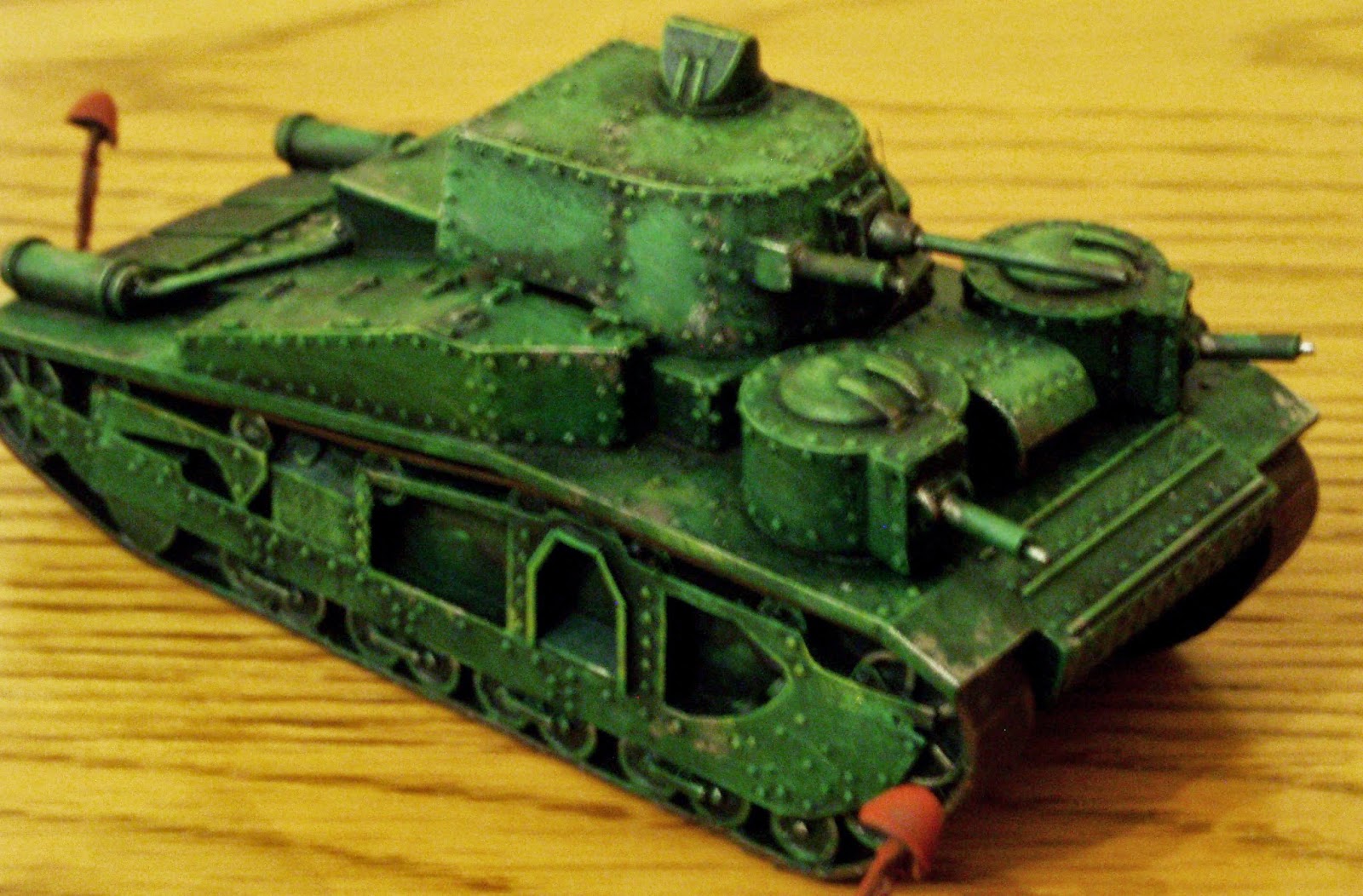 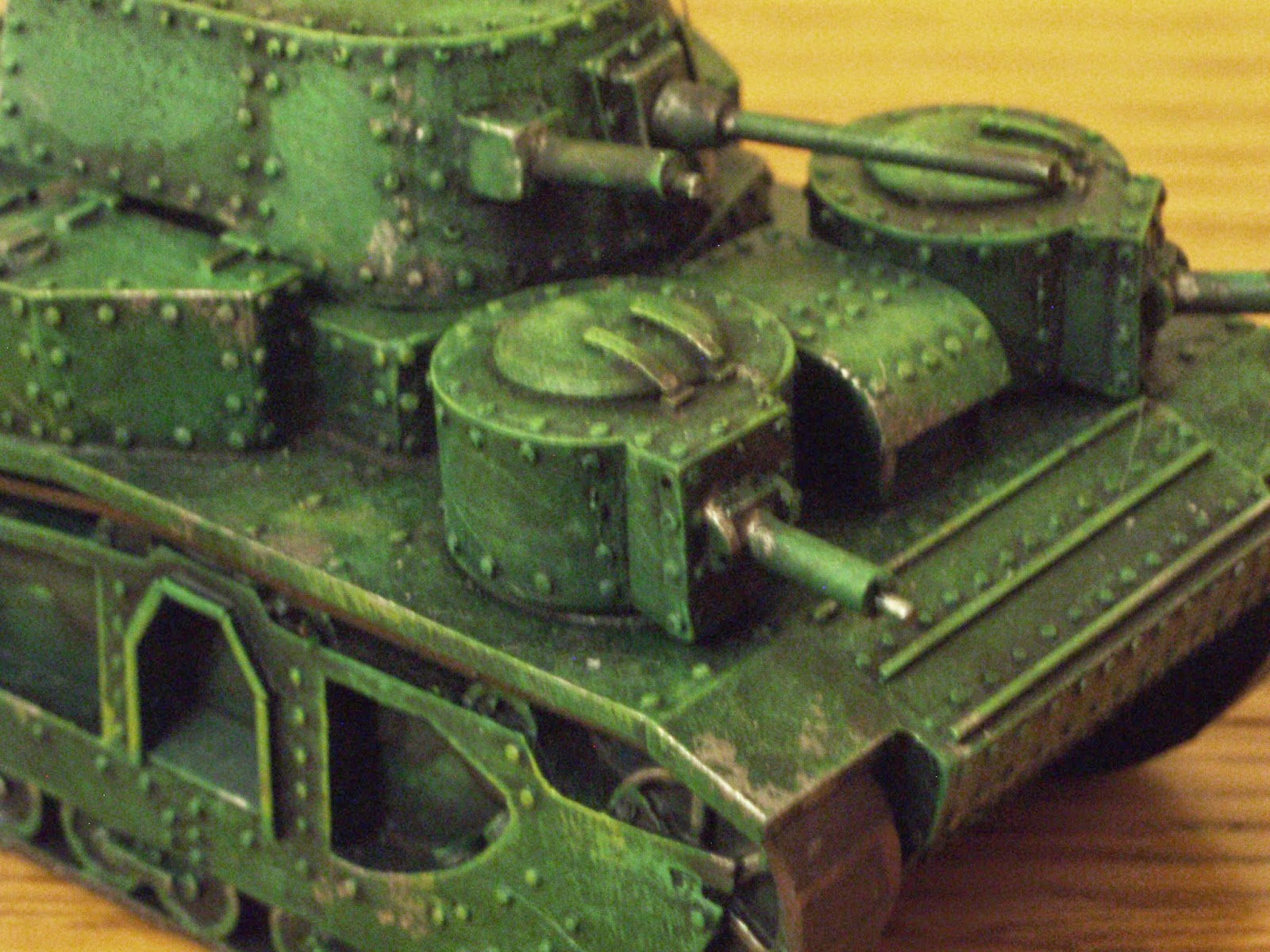 And my tank killer armour is the BA-10, a highly mobile 'glass cannon' recce armoured car able to take out all but the heaviest enemy tanks with its main gun, and nippy enough to get itself out of trouble when the enemy returns fire. 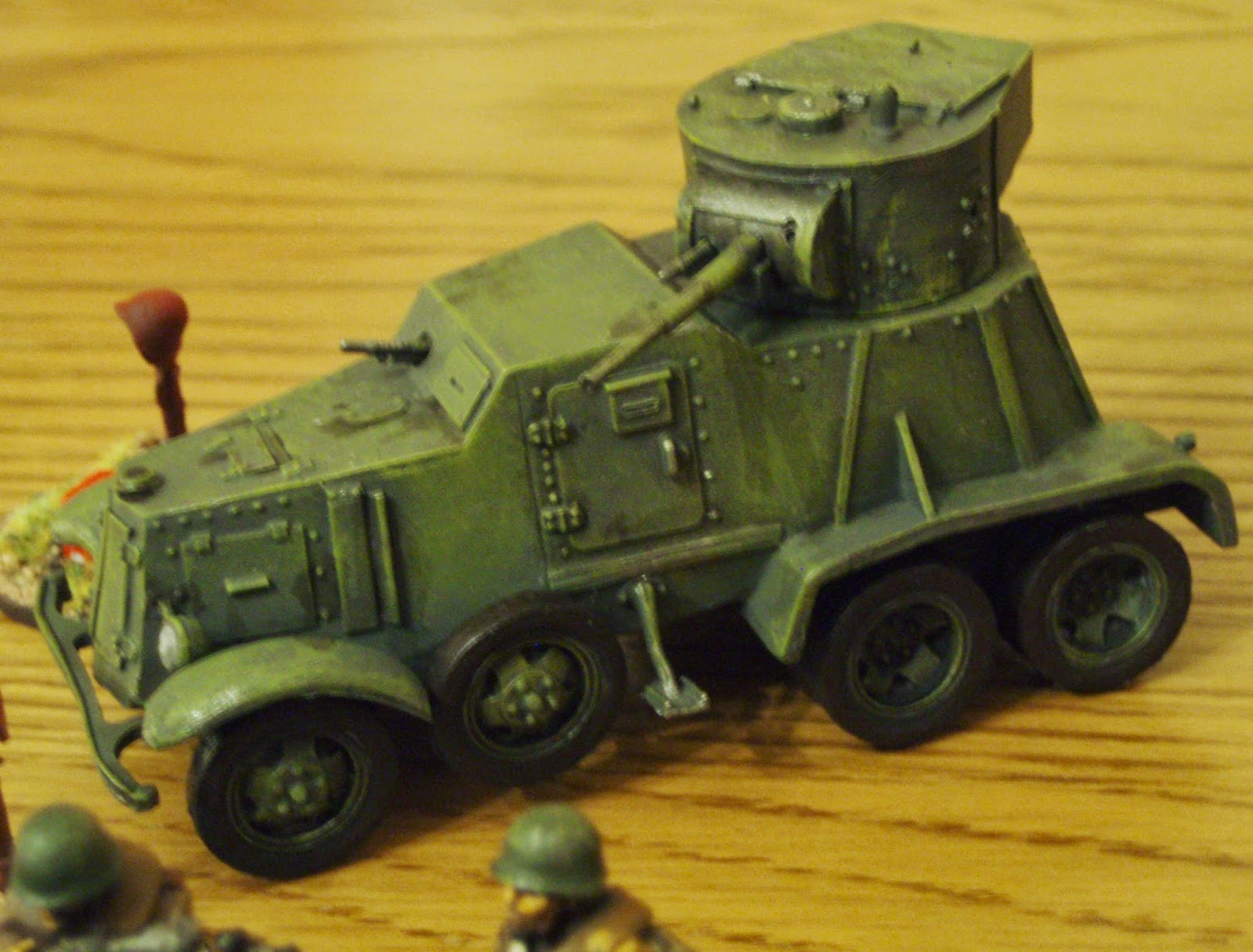 A unit of Guards with rifles and a Panzerfaust provide me with tactical flexibility and this unit usually ties all the other elements of my force together.

I also take advantage of the Russians free unit of conscripts.  Here they are armed with rifles and Molotov cocktails.  I use them mainly as reserves or to take and hold easy objectives.

My main attacking force is made up of two units of veteran assault engineers fully equipped with SMGs and a flamethrower team.  They usually start in the trucks, steam forwards of turn 1 to decamp into a solid position to launch a vicious close assault or close ranged fire. 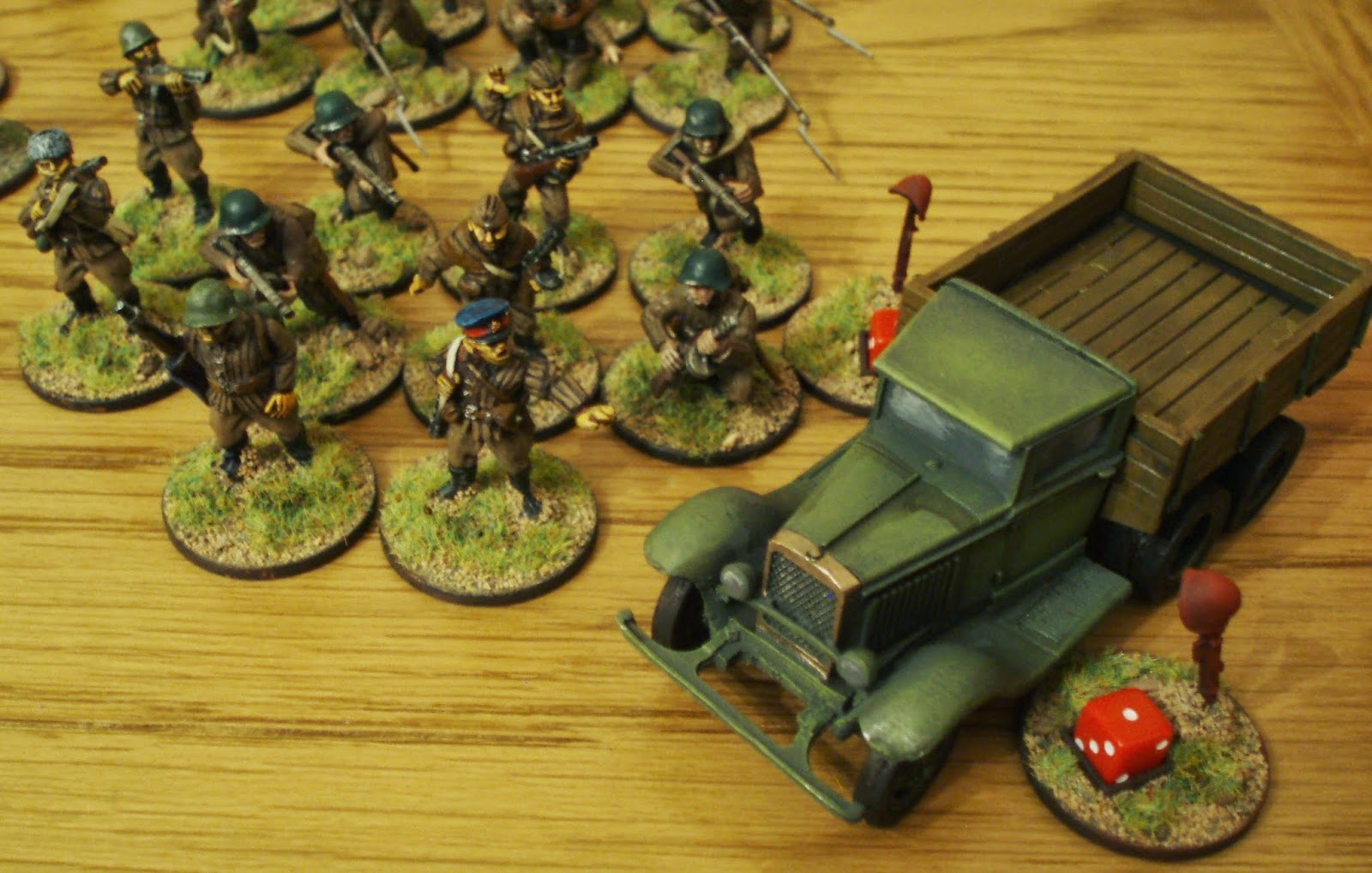 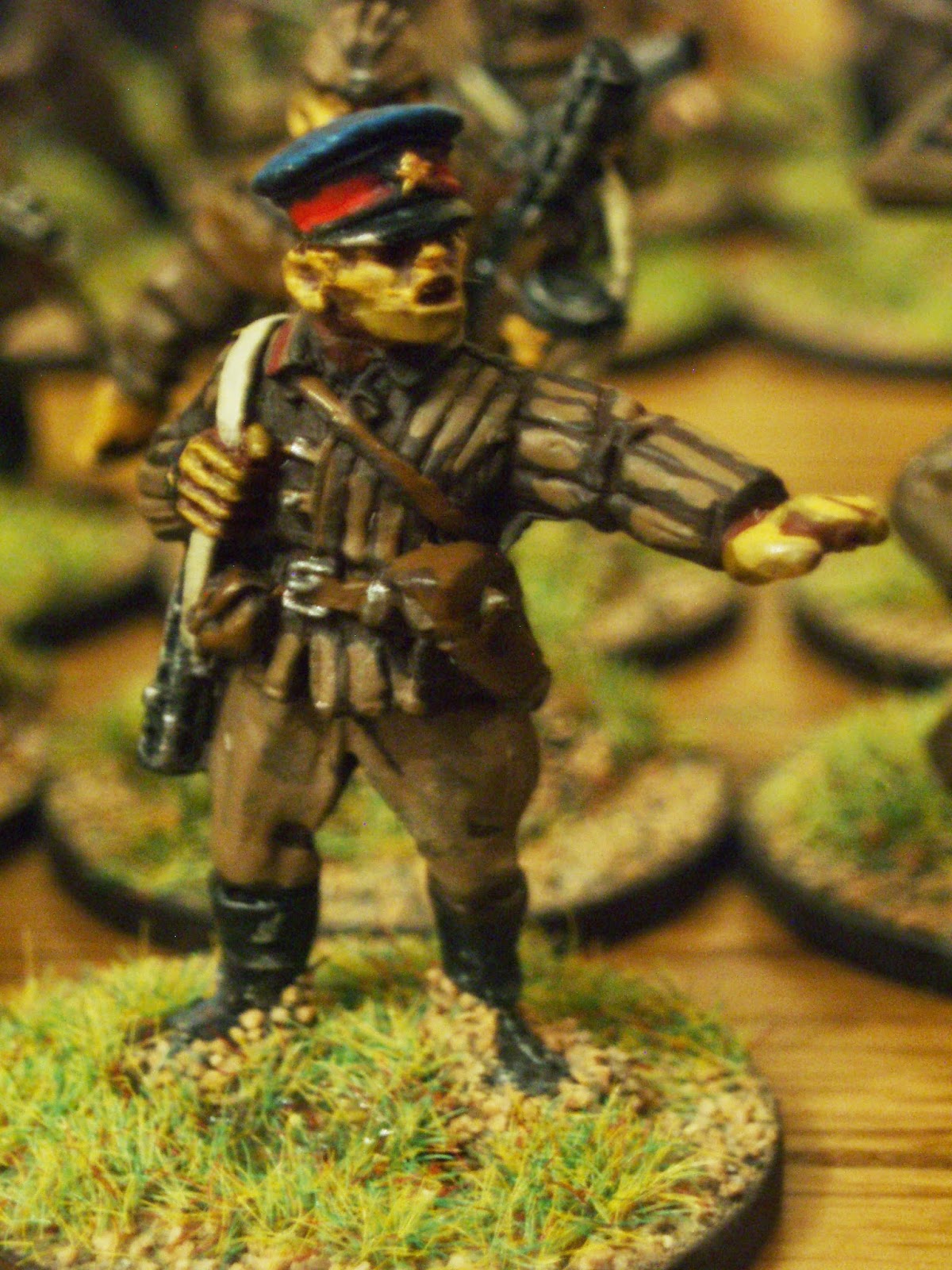 Oh, and I've made some useful little pin markers too.


So that's my main 1000pt force, but I'm steadily building a variety of options to try out.

A T34 of course.  I've not tried this out yet, as I'm trying to get to grips with the core force outlined above.  The T34 is an expensive points option to go with.  I might field it as the flamethrower variant though. 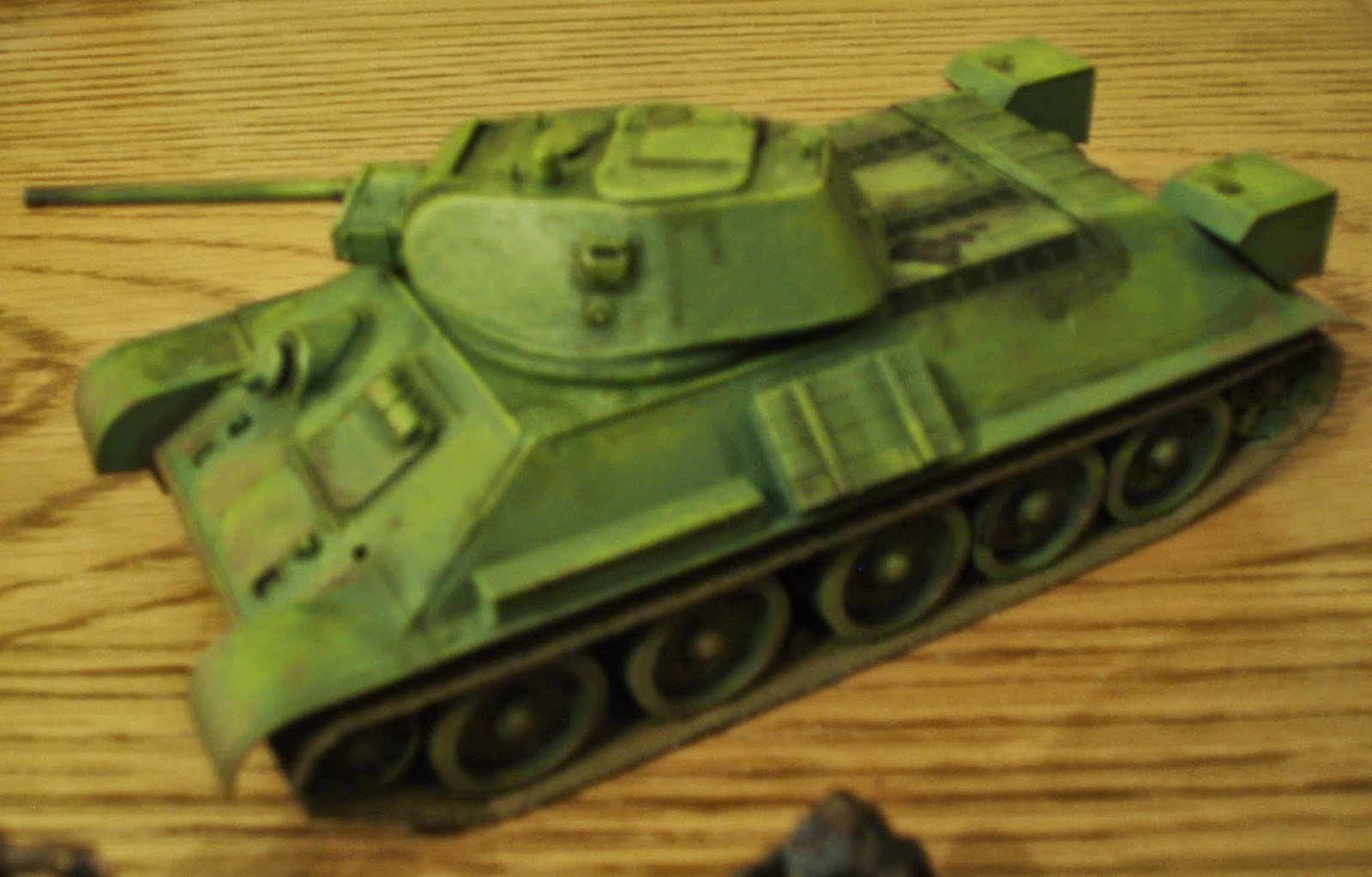 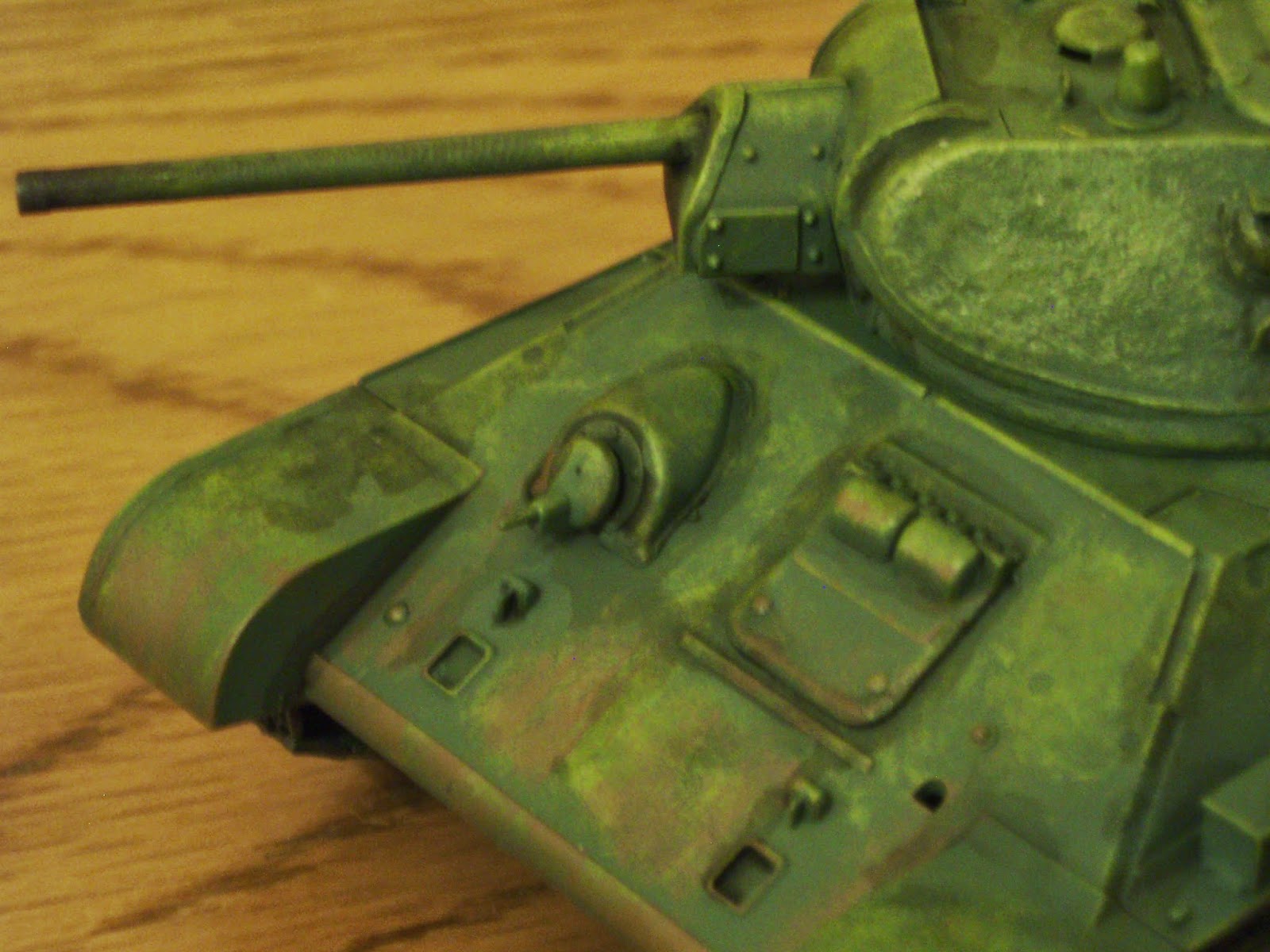 I have a heavy field gun which I've used as a heavy howitzer.  Its utterly brutal, able to flatten whole buildings and wipe out units in one shot, but its basically a static unit and Bolt Action is definitely a game that requires mobility in your troops. 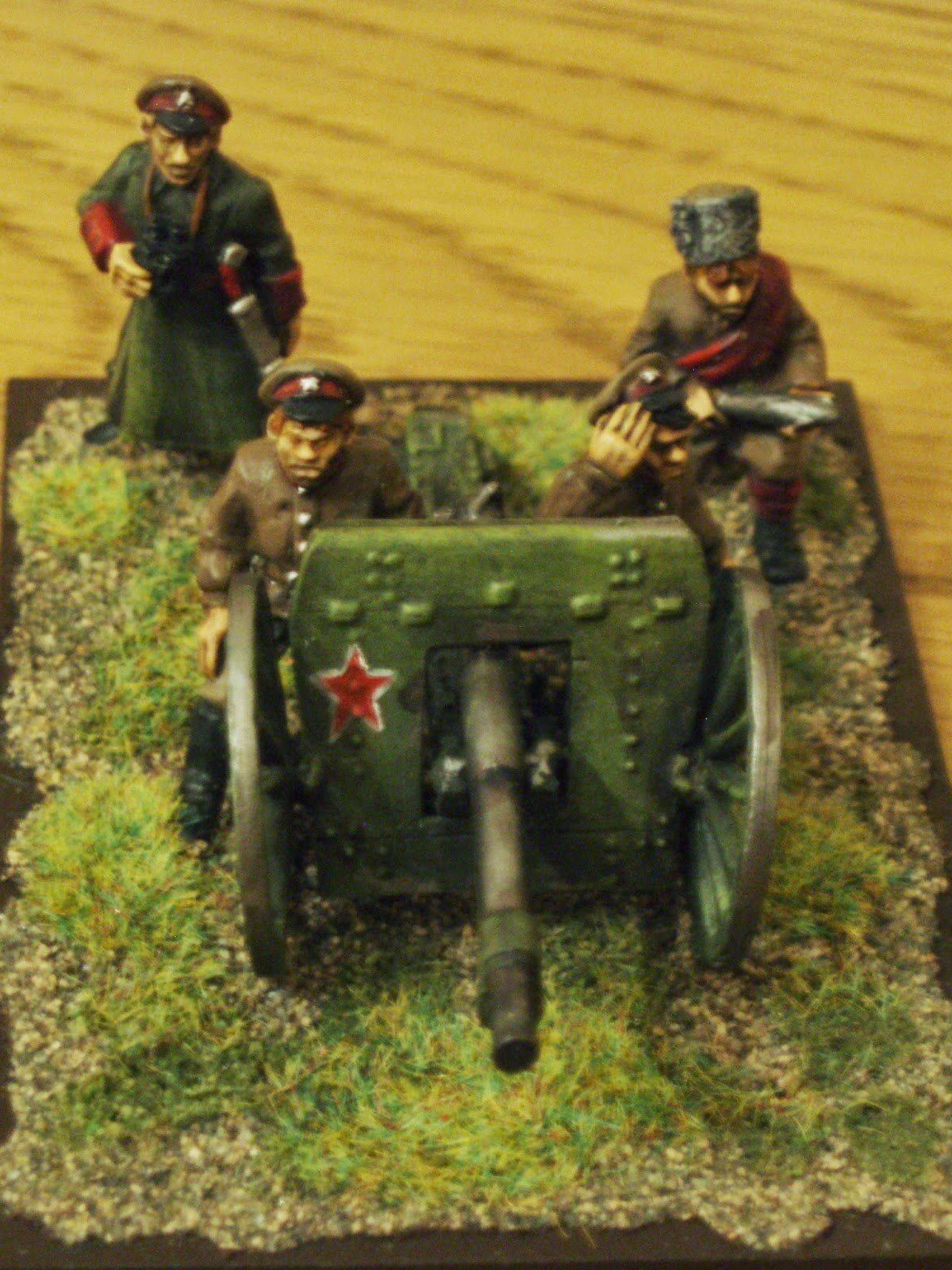 I've got a sniper team.  Not used these yet, but I pretty much face snipers in every enemy force so I should give them a go sometime.  I've found that when they're placed high up in a central building they can be devastating, but otherwise, not so good.


I've converted a leader/commissar model to be a spotter in a camouflaged coat.  Russian WWII camo appears to have been...um...basic.


A couple of weapon teams next.  The MG team has been highly underwhelming on the table top.  In fact the Bolt Action rules have LMGs, MMGs, and HMGs underperforming in the hands of infantry, which is why my infantry don't use the iconic DP-28 LMG.  Not worth it. 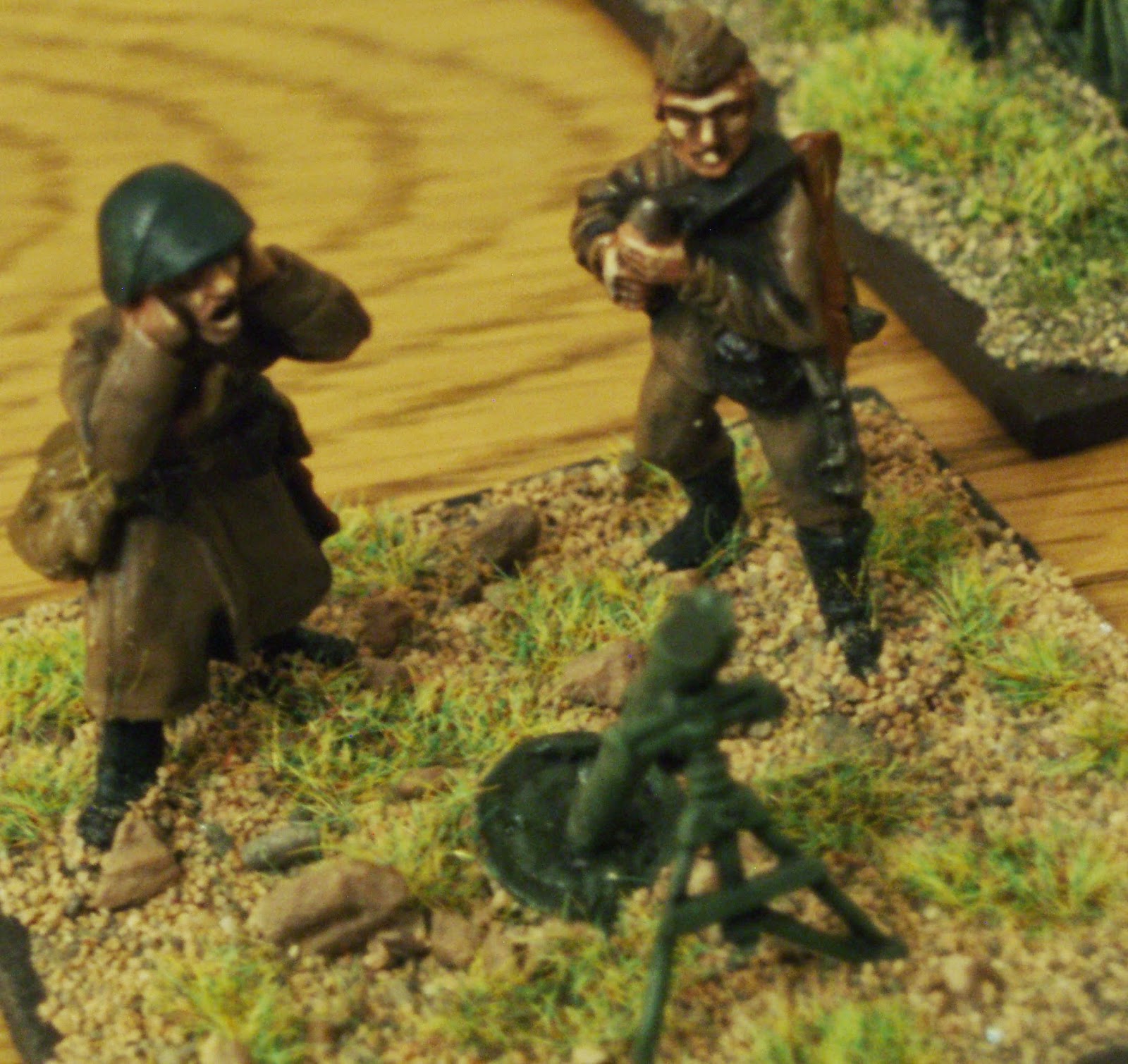 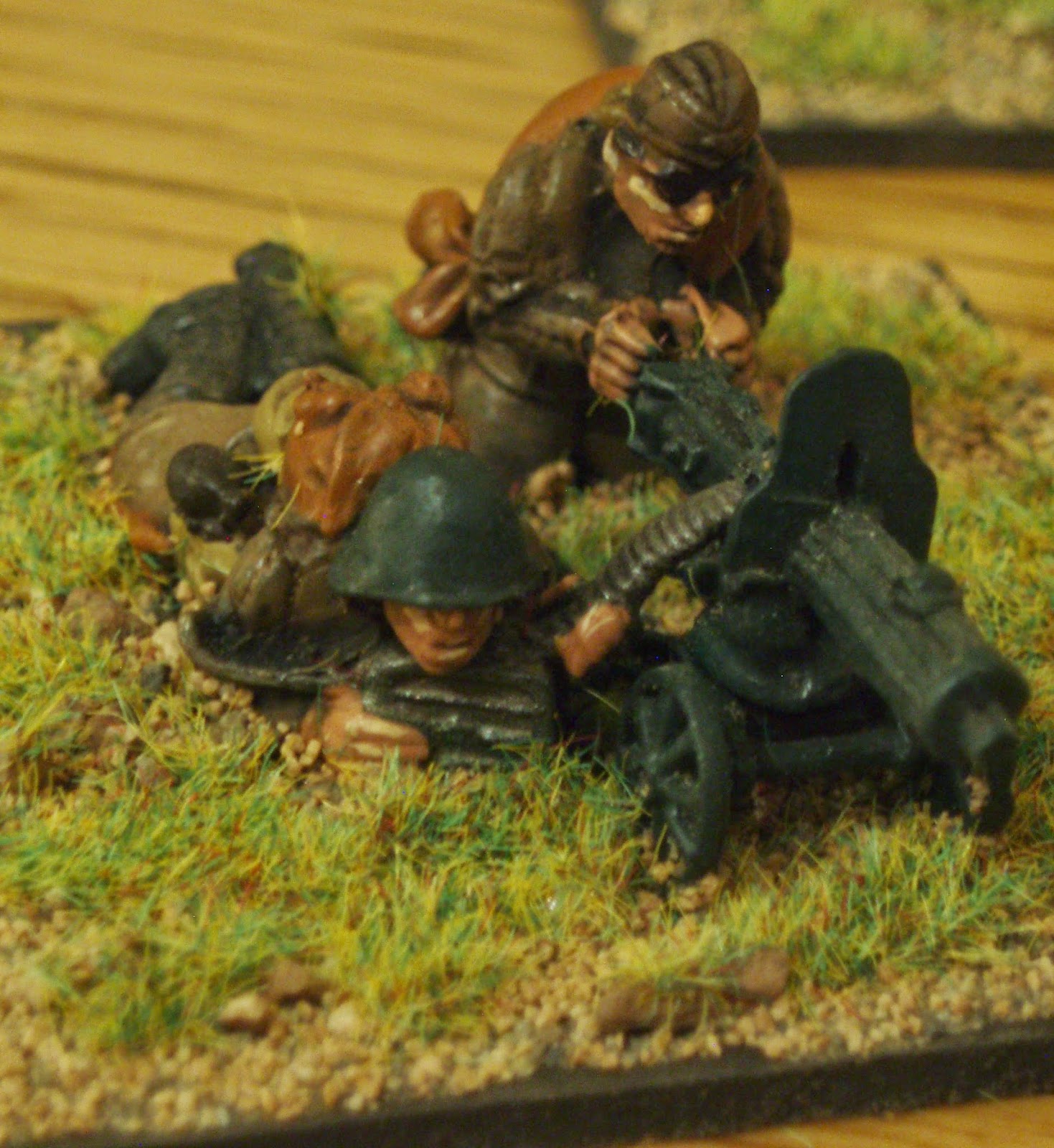 And finally...bomb dogs!  Cruel I know, but these anti tank weapons appear to be highly useful.  I've not used them yet, but our British faction player fields a Churchill AVRE which is devastating.  I may need to spam bomb dogs against that monster!

Next up, I have some cavalry to paint.  Copplestone messed up my order though so I didn't get the flag bearers I asked for.  Might be a delay there then...  I've got enough to try out so far though so no worries!