After Dorking 1871: The Battle for Cherkley Wood

It’s been a good long while since The Battle of Dorking and we always planned to do a series of follow up engagements.  However other projects and a lack of workable rules (that we like) for the period have added to the delay. However, here we are now and I’ve decided to go with some simple rules ‘Hordes of the Things’. The basics work perfectly well and with a simple bit of tweaking the troop types here are adequately represented.  And so, to battle...

OH, first...apologies for the poor picture quality.  Gremlins in the camera's cogs and steam tubes no doubt.

Following the disastrous events of the Battle for Dorking and the North Down’s Ridge, all looked lost for the beleaguered British.  However the doughty defence by their militia, yeomanry, and volunteer units had given the Prussians a bloodier nose than expected.

The stifling heat and punishing rain of the previous day’s fighting had exhausted the Prussian soldiers of energy, water, and ammunition.  So for a few precious hours overnight they halted their advance as their logistics trains juddered out of Brighton and up to the front bringing fresh supplies to the resting men.

The British rout has been halted overnight by a few charismatic leaders a few miles to the north, and hasty defences attempted.

The British Colonel Bramley-Hughes has established a position with his Surrey Volunteers Battalion south-east of Leatherhead and is gathering the retreating units into a makeshift defence. He’s also sent messages for reinforcement to formations in reserve to the north, as his forward scouts report a massive Prussian force advancing from the south onto his position.

The Prussians have paused overnight to regroup after their success, and now a force under General Von Holstein has been pushed north to pursue the British and secure the roads to the east of Leatherhead.  This vital preliminary action is a precursor to an planned attack that will isolate Leatherhead from resupply from Epsom ahead of the main assault from the south west.

As the British and Prussians stream into the area battle is joined at 11am.  It promises to be a brutal day…

The British positions are tenuous as the Prussians begin to emerge from the south around Dean Wood. 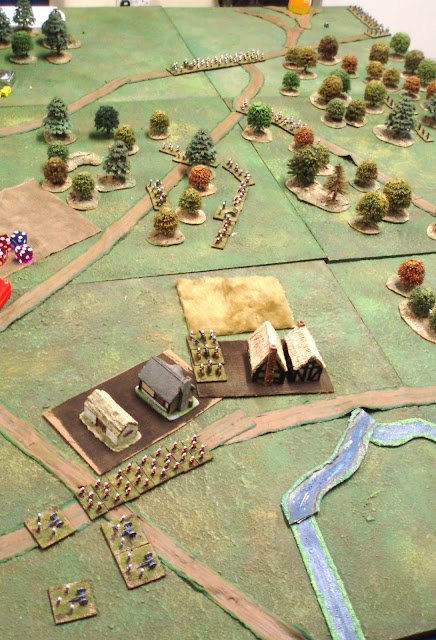 From the north west (foreground), the 3rd Leatherhead Volunteers deploy their muzzle-loader cannons while their infantry march south around Givons Grove.

Brigadier Wellborough led his cavalry east through the town into the fields beyond, to link up with the entrenched 4th Surrey Volunteers. 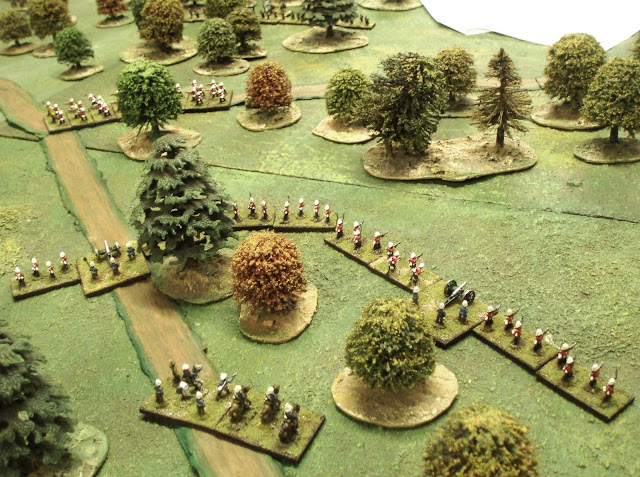 South of Cockshoot Wood the 2nd & 4th Kentish Militia march north east to the crossroads, hotly pursued by the Prussians at their heels.  And to the east of the Surrey's positions the 2nd Reigate Yeomanry similarly march north. 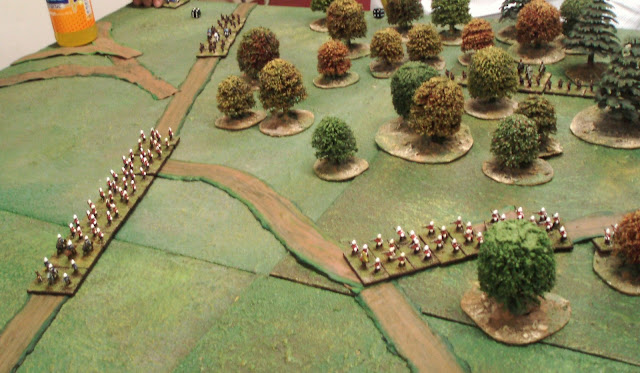 The action for the day opened at around 11.15am when the Prussian 82nd Jaeger Infanterie (under Brandt) emerged from Dean Wood and delivered a devastating enfilade into the Kentish men. 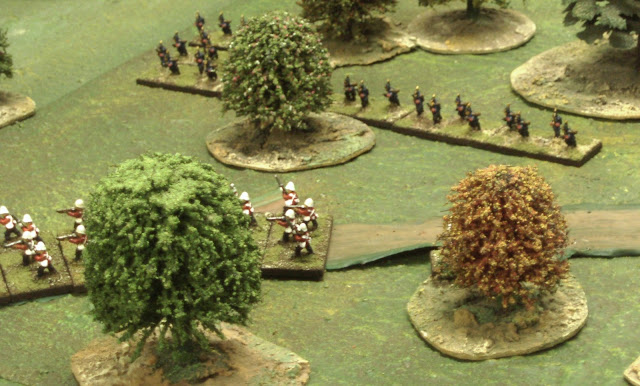 Dozens of men were shot through and panic spread along the column.  The Surrey Volunteers watched in dismay and dread as the Kent Militia lost order and broke into a confused rout. 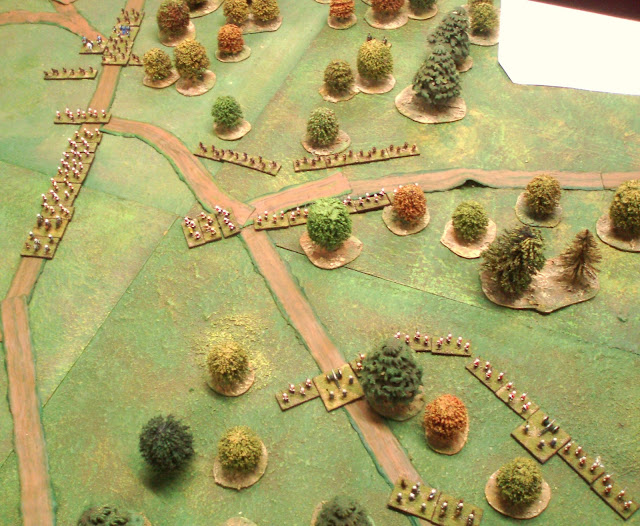 Captain Maidley did manage to restore order though and a firing line was established.  Ill-disciplined British militia fire was no match of the Jaeger marksmen though and in a fearsome exchange of fire, the British were torn to shreds. 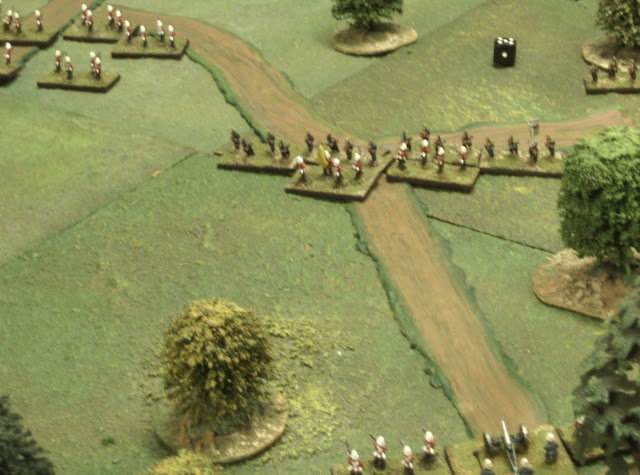 Meanwhile just to the east, the Reigate Yeomanry managed to form a double defensive line as the 151st Infanterie filed out of column into a resolute disciplined firing line.   The Yeomanry were bolstered by the timely arrival of the 1st Epsom Volunteer Infantry. 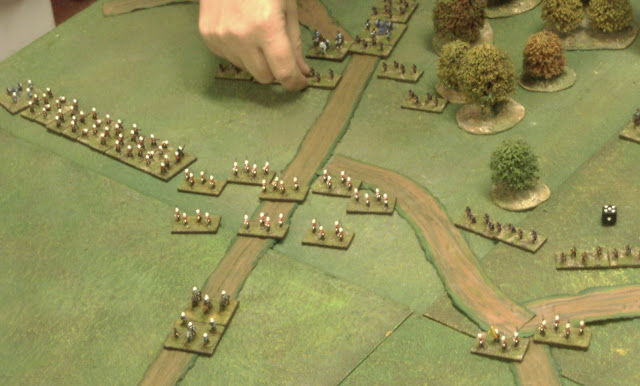 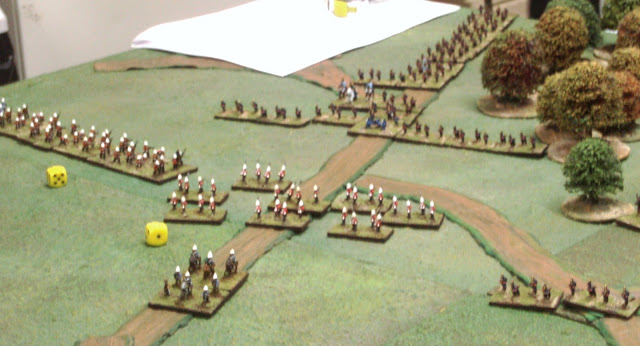 Over to the west the Prussian 272nd Infanterie march north along the outskirts of Mickleham, deploying their fearsome Krupp breech loading artillery in support and forming an advanced rifle line. 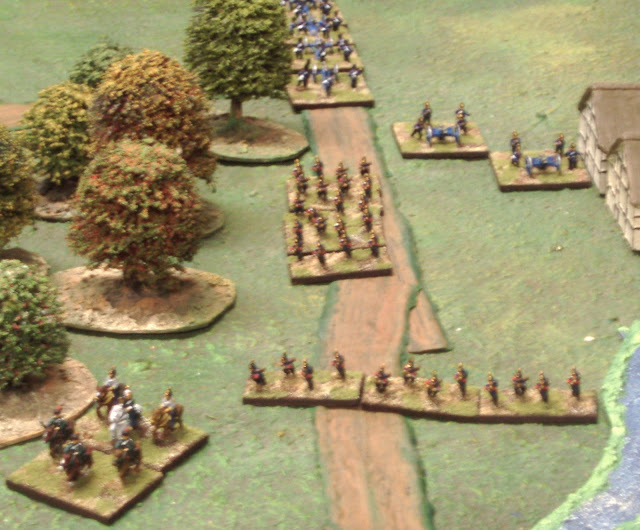 The 101st Infanterie stormed through Juniperhill Wood and Cockshoot Wood at the gaping hole between the British Leatherhead and Surrey positions. 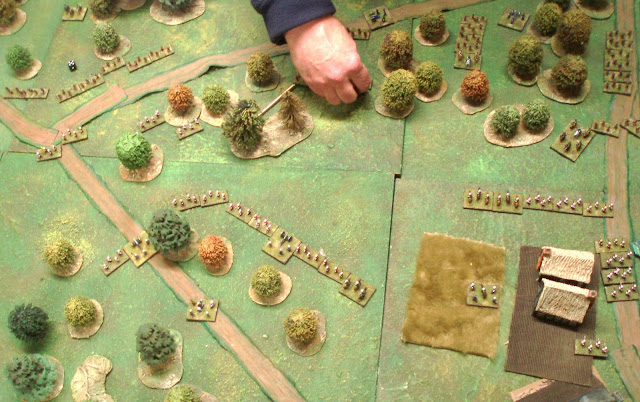 By the middle of the afternoon, the battle lines are formed.  All along the front, withering Prussian needle-rifle and artillery fire rips huge holes in the valiant but outclassed British and the lines begin to waver. 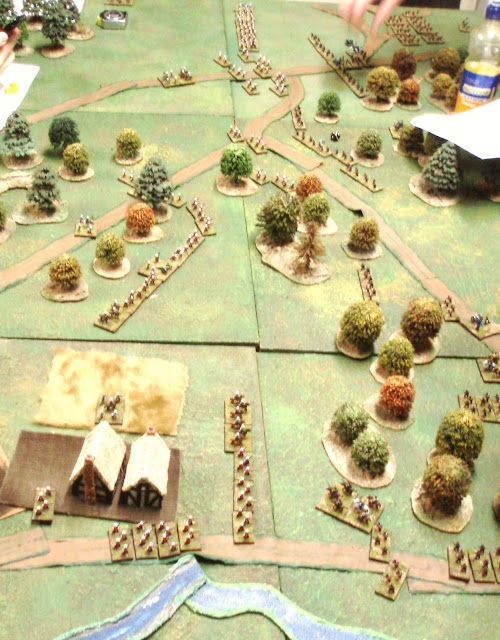 The arrival of the 3rd Hampshire Territorials, a brigade of regulars arrives to bolster Colonel Bramley-Hughes' position.  Captain Bartlett takes stock and realises the British position is likely to fall, but takes his men into the line anyway. 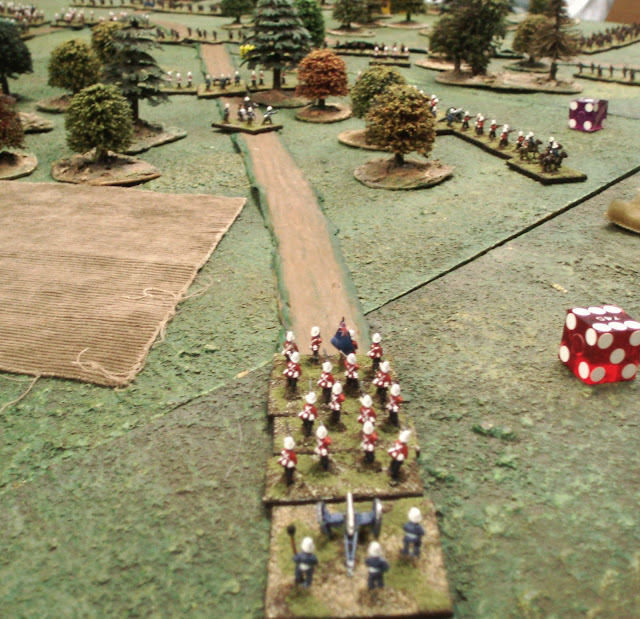 To the west between Mickleham and Givons Grove, the Leatherheads make a last stand against the 272nd, no reinforced by the 43rd Artillerie. 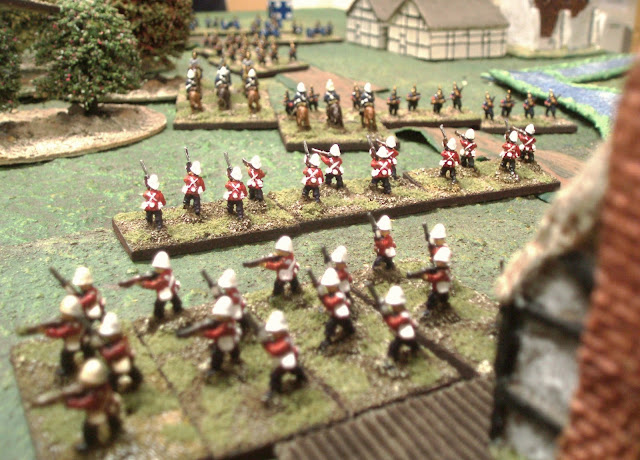 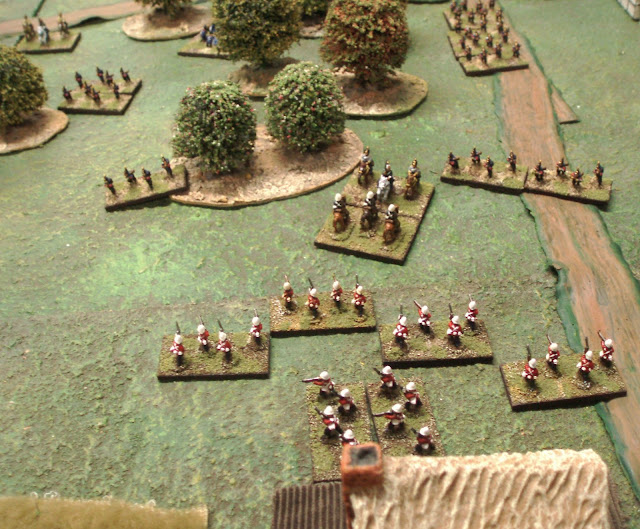 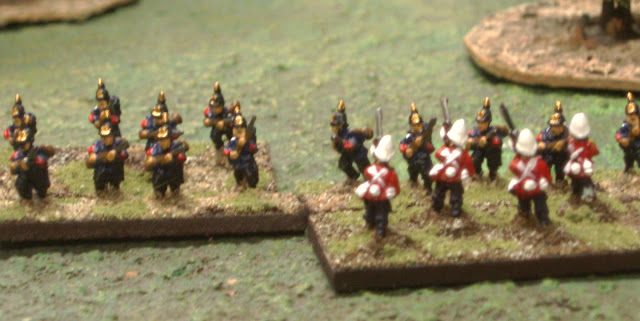 Vicious hand-to-hand fighting sees the off the British, and the Prussians advance to capture Givons Grove. 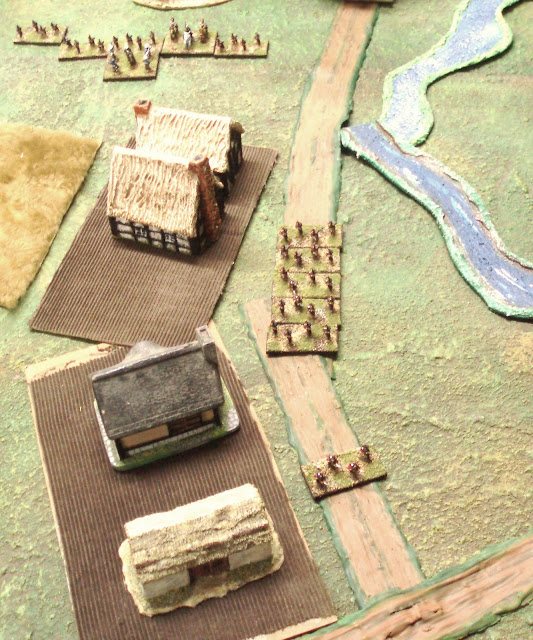 Around Cherkley Wood, the Prussians broke through, captured the key crossroads, and began to shatter the Surrey Volunteers. 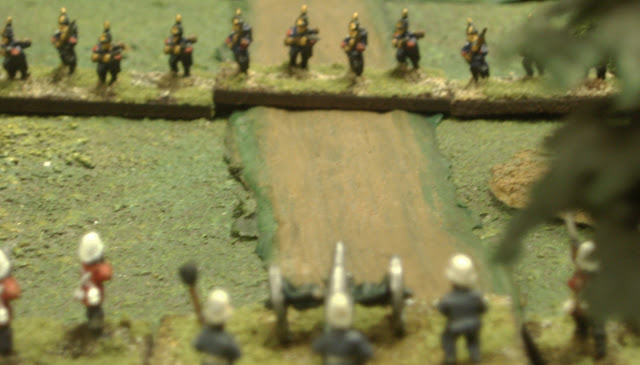 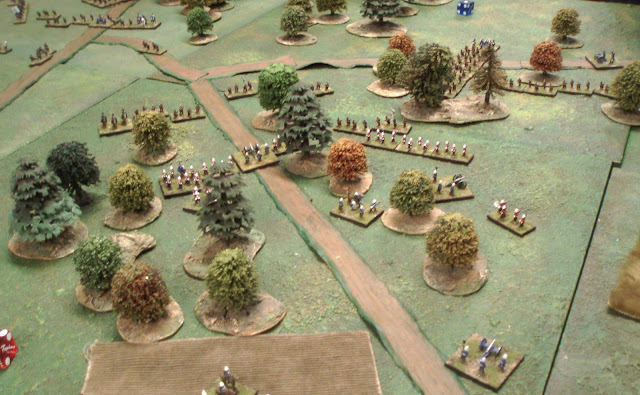 Only, the British eastern positions managed to hold on, but with Colonel Bramley-Hughes in full retreat, and the Prussians holding all the key objectives, the game was up and the British fled north. 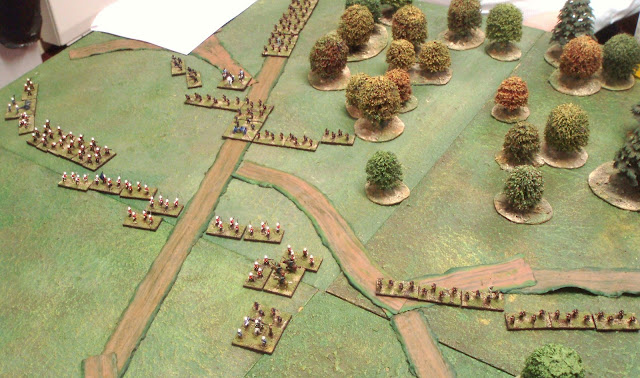 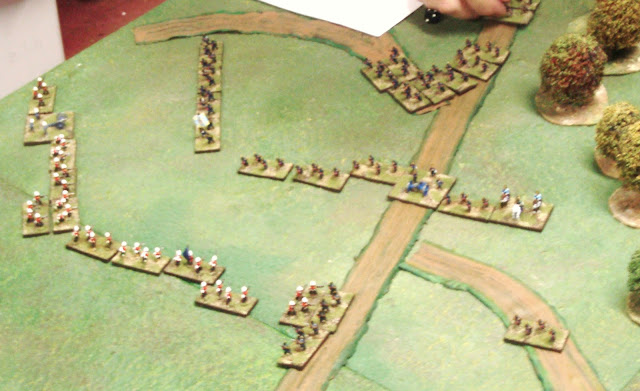 The dastardly Hun are now in a position the bring up their reserves to take Leatherhead and Epsom on their march to the final defeat of Britain.


It was a cracking game and probably a foregone conclusion for the outnumbered and outclassed British!

The Hordes of the Things converted rules worked really well for the period, although I need to tweak some of the factors and outcome results a bit if i'm going to use them for the next battle.

Following the battle, a review of the strategic and tactical situation shows the progress of the Prussian attack so far.

Landing at Worthing and Brighton the Prussians routed the British beach defences almost immediately, and advanced quickly to capture Guildford, Dorking, and Reigate.

The tactical position around Dorking (where we've run our two battles so far, shows the overwhelming success of the Prussians so far...


Can the British muster enough 'Bulldog Spirit' to stop the Prussian war machine?