Chain of Command - Germans vs Russians 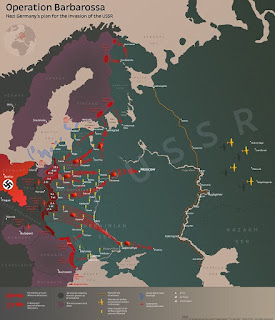 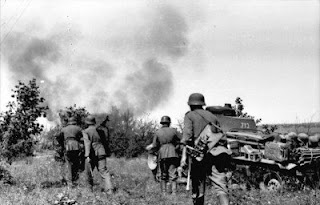 The might of the German Wermacht is rolling across the Russian steppe in a vast unstoppable blitzkrieg, and our attention turns to a small village somewhere in northern Ukraine.

The Germans had paused outside the town and for 6 hours their artillery had reduced the place to ruins.  The people had fled east, but the Red Army was still in their boltholes, ready to fight once the Germans came in.

And come in they did.


Below you'll find the forces we were using.  We had four players, two per side, and I was playing on the Russian side.

We were playing Scenario 3: Attack & Defend, with the Russians on the defence.  In that scenario, the defenders set up their patrols first and the attackers (in this case the Germans) second.  The attackers then get 1d6 free patrol moves, and the Germans rolled '6', so from the off, they were able to get their patrol forward and confine the Russians to the town.  This wasn't too bad as we'd intended to use the buildings as defensive fortifications anyway, but we did set our patrols to try to give us options to counter German flanking moves.  Turns out we were patrolled into the town.  However, our initial positions meant that the Germans were forced to deploy at least one of their three Jumping Off Points on their base edge.

The first actions was on the south flank, as an Infantry section took up position in the woods.  Its MG34 team set up in the building, ready to surpise Ivan if he tried to put up a fight.

Spotting the Germans, the comrades took up position in the ruins, and immediately called down mortar fire on the Fascists.


The opening few phases of the game was an infantry exchange on the southern flank, with the Germans putting a unit on the table to try to push in towards the village.  We countered by deploying an infantry section into one of the buildings, supported by a mortar team.  The Germans had an artillery barrage in place which should have made it difficult for us to do this, but they rolled a "Turn End" result in their first phase so this barrage finished immediately!  the initial exchanges saw a few losses on both sides, but nothing serious or decisive.

It was a ruse!  With the Russians revealing their position, a StuG rumbled up and put a shell into the building.

It shattered and began to collapse in flames!   The survivors tumbled out and sprinted forwards in blind panic to seek cover behind a stone wall.

This was the first big turning point of the game.  With its first shot, the StuG scored 3 sixes on its High Explosive attack (5 dice) which meant the building it hit became unstable!  It would collapse if a Turn End result happened.  We had to decamp the infantry out of there before that happened and had a choice to make; fall back into another building or storm forwards to the wall for cover.  I didn't want to block the deployment area around that Jump Off Point so I decided to head forwards.  I actually intended to try and iverrun one of the German Jump Off Points in the woodland there.  It turned out to be a bad move as the Germans countered the move effectively.

The Germans jumped forwards, and set up enfilade into the hapless Russians who were steadily cut to pieces by the vicious MG34 ("Hitler's Buzzsaw").


The Reds respond to the StuG by calling up their T26 armoured support.  The tank traded many shots with the StuG before finally the superior German armour's shells tore through the T26 and forced it to withdraw. 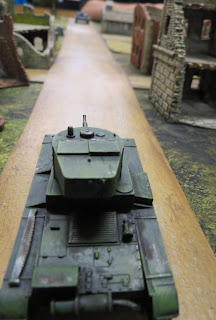 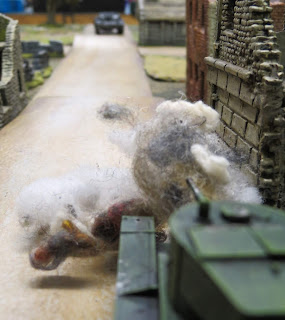 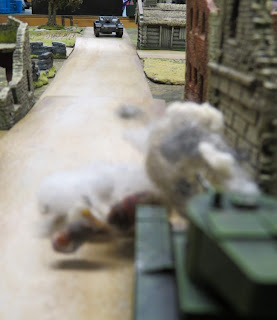 With the StuG on the board, we had to bring out our T26.  Its an uneven match-up as the StuG is overall better.  I think we used the T28 badly in going toe-to-toe, but to a cetain extent this was forced on us by the activation rolls we were getting.  Anyway, for most of the battle these two vehicles duelled with each other getting hits that forced them to respond to each other.  As the game was coming to a conclusion, the StuG finally got the decisive hit, damaging the T28 and forcing it to flee the field.

Meanwhile on the northern flank, the Germans brought a second section forwards through the woods, and the Russians countered again; they swarmed up into the outer ruins and give some serious fire into the Germans, stopping their advance.

A German light howitzer rolled out of the southern wood and with a single shot, flattened the building! 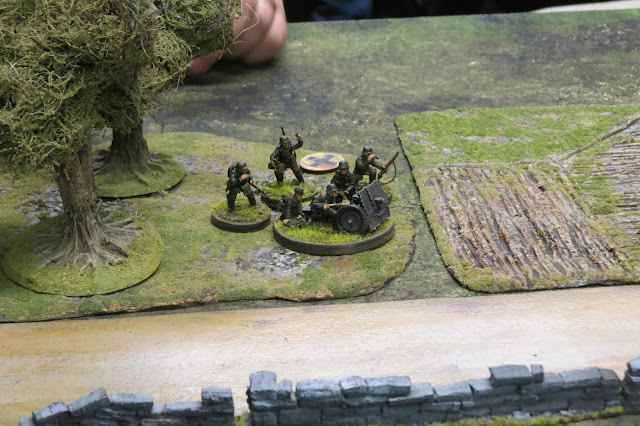 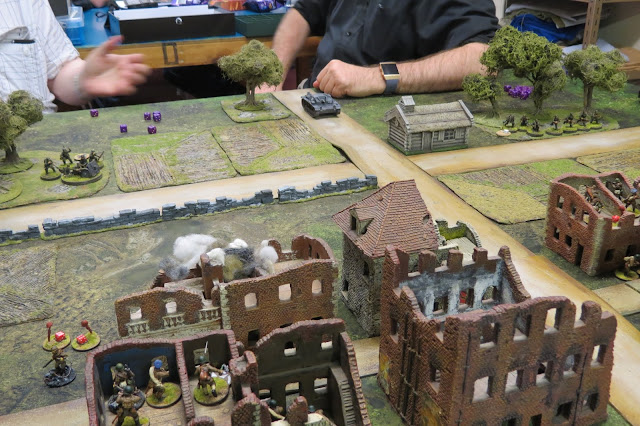 The Russians within were killed by the blast, the collapsing building, and as they staggered out shell-shocked and covered in brick dust, they were mown down by German machinegun fire.  The pattern on the southern flank was repeated on the north.

History repeated itself!  This time the German field howitzer rolled 4 sixes on its first shot!  The building collapsed immediately, killing several of the Russian troops within and, here's the killer thing, the Germans get to choose where the Russians exit the building!  Obviously they chose to have the Russians flee out the front into the open before the German firing line.  Devastating.  I think its unlikely to have one building suffer this effect during a game, but two was amazing!  These two single shots caused a lot of damage to the Russian "Force Morale".

As for building collapse rules, we we're sure what happened after that, so we assumed the buildings became piles of rubble.  We decided that these terrain areas were now impassable.  Asking on the forums afterwards, it seems you can reoccupy the ruins but the rules don't mention how.  The best idea I saw was that you can reoccupy the new collapsed rubble area at after a Turn End.  Makes sense! 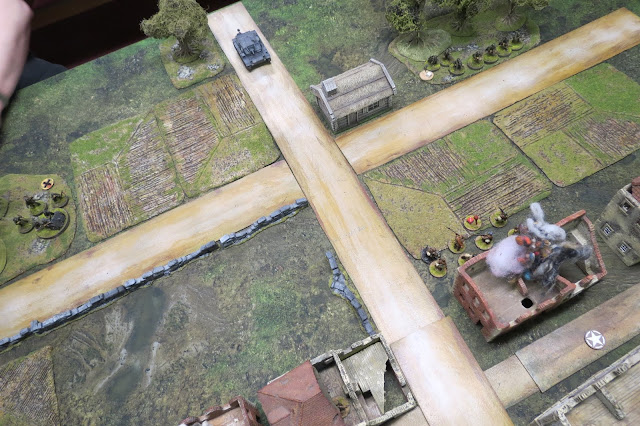 Red Army morale was collapsing and the Germans were pushing hard; but they didn't have the field yet.

A second line of Russians jumped in and cut the southern German flank to pieces, including killing their platoon commander!  As that shocking news spread through the German lines, their morale became shakey! 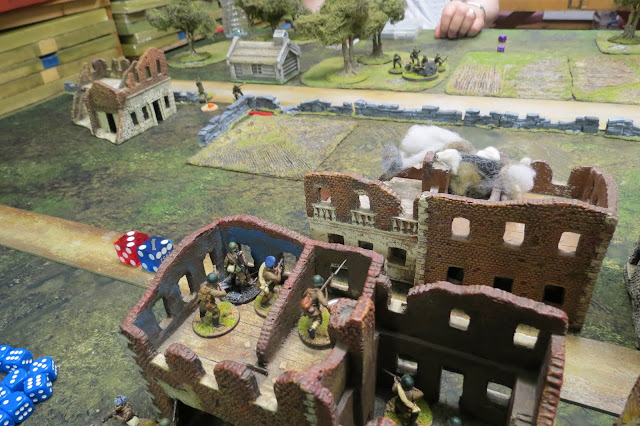 With the game slipping away from us, we brough more troops on and tried to concentrate fire onto German positions that were shaky.  We were looking for wipeouts that would hit the German "Force Morale" too.  If we could get them to below three pionts, the game would be drawn even if we were tactically beaten.  Killing off the troops and leader on the southern flank seemed the baest way to do this, and turn out that it was.

But they'd done enough and as they finished off the Russians ahead of them, the Red Army withdrew to find better ground to defend.

Phew!  An excellent battle, with a surprisingly close finish.  Two more points off the Germans and it would have forced a draw.

The turning points in the battle were the German high explosive shells that amazingly flattened both the buildings they hit!  The chances of this happening are slim but sometimes the dice are with you.  With the Russian front line destroyed by those collapses it opened the battle for a German victory.

We're loving Chain of Command at the moment and this will become a regular event on our table, for a while at least.

Our forces were constructed from the Operation Barbarossa supplement lists.

Email ThisBlogThis!Share to TwitterShare to FacebookShare to Pinterest
Labels: Chain of Command

Starting a new project for the Too Fat Lardies excellent "Chain of Command" (CoC) WWII rules. 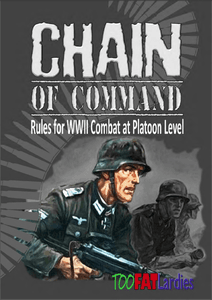 I already have a 28mm Russian platoon (which I created for Bolt Action  http://luddite1811.blogspot.com/2014/10/bolt-action-russians.html), but I figured I need some Germans to challenge them.

So far after two build sessions I've finally constructed the contents of the Warlord "Blitzkrieg Starter Set" (with an additional HMG team).

Turns out, as CoC is an actual historical set, for the early war I need an additional Infantry Section, so I'll have to pick that up.

The Warlord set also includes prone figures integral to the squad build.  I really dislike prone figures on the table top so I'm a good few figures down, and will have to get a couple of senior commanders separately.

Also, I absolutely can't stand multipart plastic kits and the Warlord kits are particularly troublesome, being super-fiddly and difficult to assemble - particularly lining up the spearate arms and guns.  Multi-part plastic is the standard in wargaming now though, so its a neccessary evil that I have to go through the rigmarole of glueing all these tiny little bits together.

The basing on these Warlord figures is wholly inadequate so I'll need to get some proper bases too.

Still, next up is the undercoating.  Black or grey for the vehicles I think, and maybe an olive green for the infantry.

As these are for "up to 1941", so as Germans used a simple flat grey on all their vehicles during this period, they'll be the flat dark grey.

Uniforms of all protagonists were fairly varied, and the Germans are no different. However, in the early war the Heer division infantry general work a mix of green and grey so i'll paint them generally with dark green tunics & dark green or grey trousers. 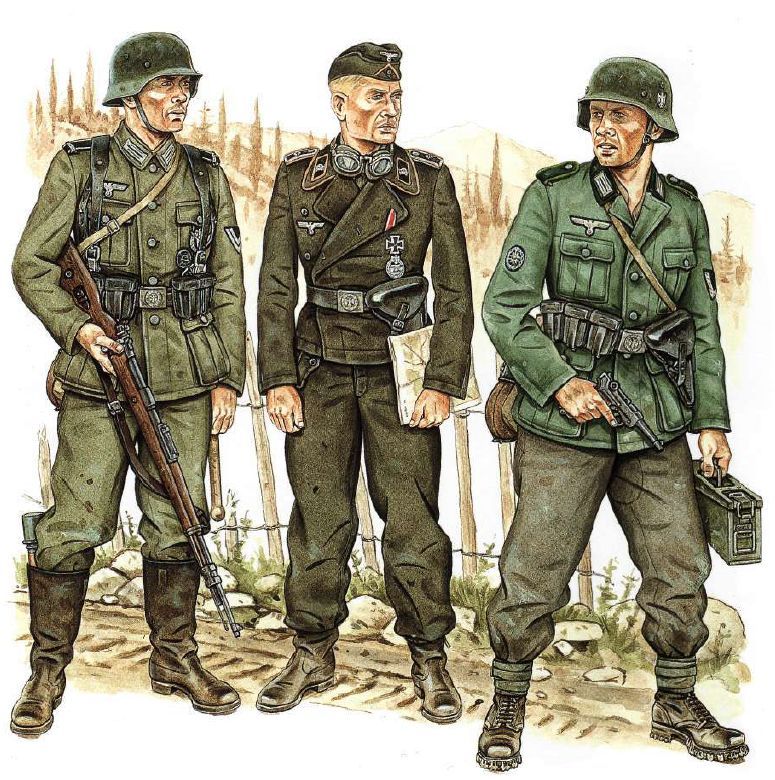 Anyway, here's what I have for a start: EDIT 1:  After a productive evening's painting, I've got the infantry done to "base colour" stage.  This took a little longer than expected as I don't have a "feldgrau" paint and had to mix up a colour as I went along (a couple of greens mixed with grey).  It came out OK I think. 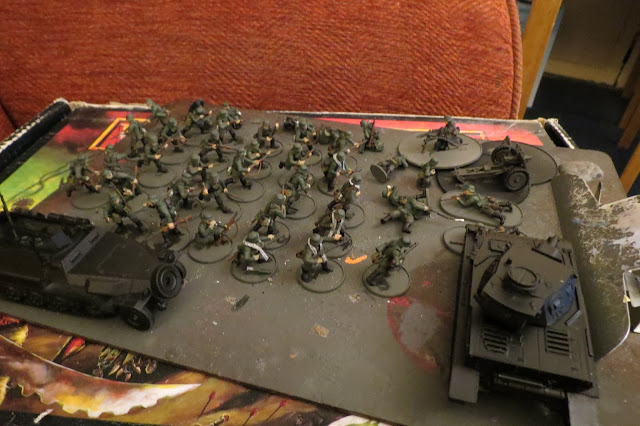 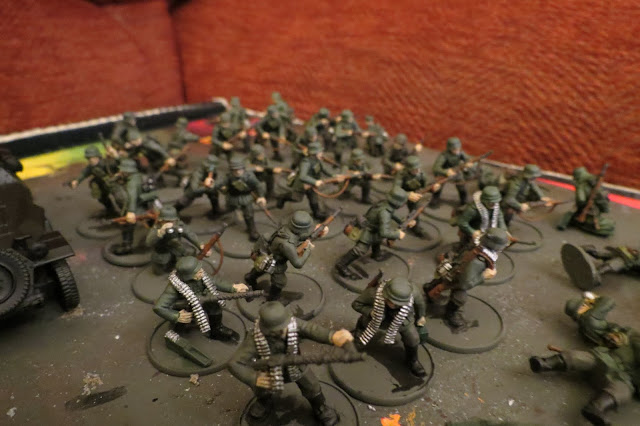 Next up the washes and highlights and these should be done.

I've bought another 30 or so to add the missing 4th Section and to assemble options (leaders with MP40s, senior commanders etc.)

I'll probably do these vehicles first before I dive into the infantry again.  Facing the hated "fiddly glue stage" takes some building up to for me.

EDIT 2: Progress tonight and I've finished off the washes, details, and completed the vehicles.  Everything is now based, but I still need to do that actual basing.  I may leave this until I have everything ready.  I need to get some larger bases for the weapons teams and snipers anyway.

Next up, I'll be making the 4th Infantry section, the platoon commanders and extras like leaders armed with the MP40, adjudants and medics, etc.

EDIT 3: tonight I only got a short time. No painting, but I started to assemble the additions and options for the platoon.


I'd hoped to also put a medic, adjudant, the rest of the 4th Section, and some additions for the support weapons crews together, but ran out of time.

EDIT 4: this lunchtime I picked up a few more reinforcements from my FLGS... 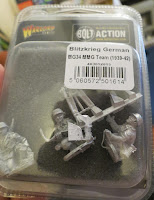 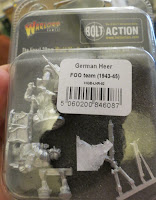 EDIT 5: ...and everything's made and ready to undercoat.  Except the Forward Observer team.  I've ordered some bases and need them to arrive before I make that team up. 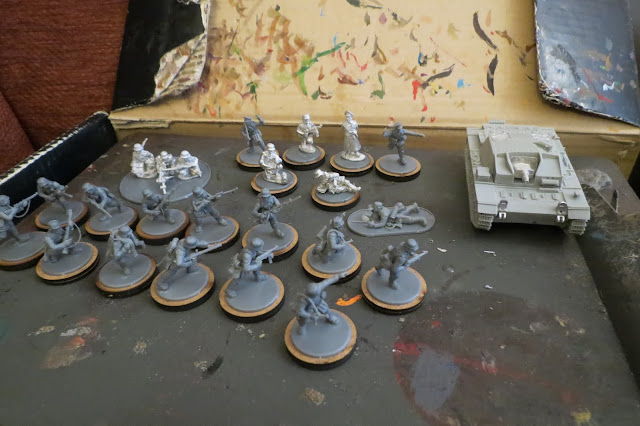 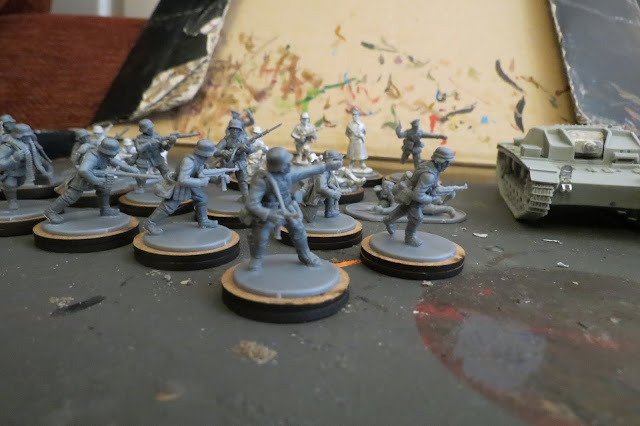 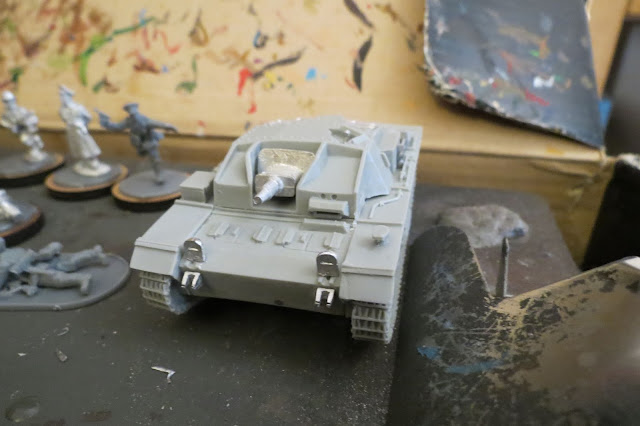 EDIT 6: the platoon is mostly now finished.  Only the spiner team's basing to finish off, and I have a "forward observer" pack I've not made up yet - not sure I need them really.

This was a fun project to run, and I finished in in around 20 hours.

They'll be going into action tomorrow night against the Russians in Operation Barbarossa.