The virus quarantine continues and so does my progress in sorting out and getting paint on the various armies that lurk unloved and incomplete around the nooks and crannies of my Lead Mountain.  Having received my newly ordered bases, on the painting table next is another Warband army.  This time is the Barbarian Men; an army largely based on the "Sword and Sorcery" tropes of the classic works of fiction like Robert E. Howard's Conan book.


Facing having to build and paint a whole army can certainly be daunting, but with a solid plan and clear procedures to follow, its actually pretty easy to power on through and get things done.  With 10mm figures, its important to remember that while you can make each miniature a work of art, for the creation of gaming pieces, you can take shortcuts and make each figure perhaps less impressive, as the visual impact comes from the overall effect.  Increasingly I've taken to a light or white undercoat and the liberal use of colour washes, and Games Workshop's "contrast" paints.  I find it a much faster way of painting large numbers of models to an acceptable tabletop standard. 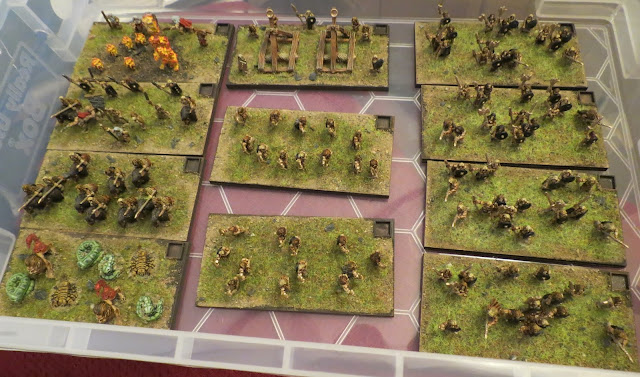 After a weekend's work, perhaps 8-10 hours in total, an 11 base army is in the box and ready to take to the tabletop.  It consists of the following units now: 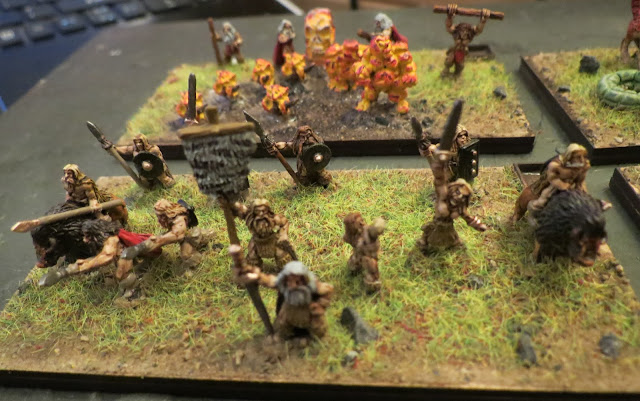 The General unit is populated by an impressive chap who has "discovered the riddle of steel" and therefore has a large steel sword.  I filled the base with figures from other units too, to give him a retinue of guards and heroes.

The Magic User unit was fun to make and I drafted in some old style Pendraken gnome figures, and some "stone elementals".  I painted them up as summoned fire imps and molten monstrosities.  The Barbarian Men magic spell list is full of fire magic and so I wanted to represent this on the base.  I'm not an expert at painting realistic fire but I do my best.  Of course such creatures will scorch the ground so I painted that with a bit of black and left it free of grass to give the impression of them burning their way into reality from some magical realm. 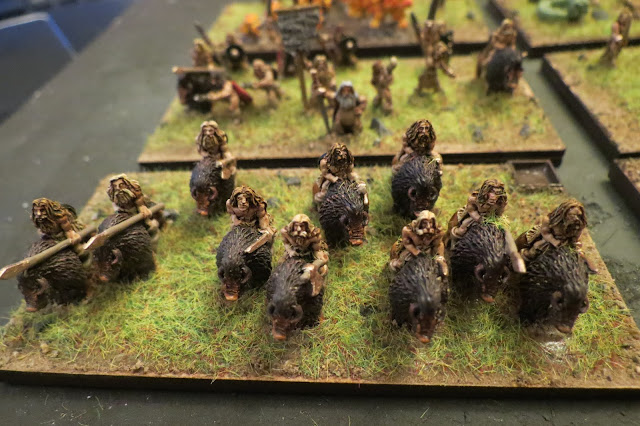 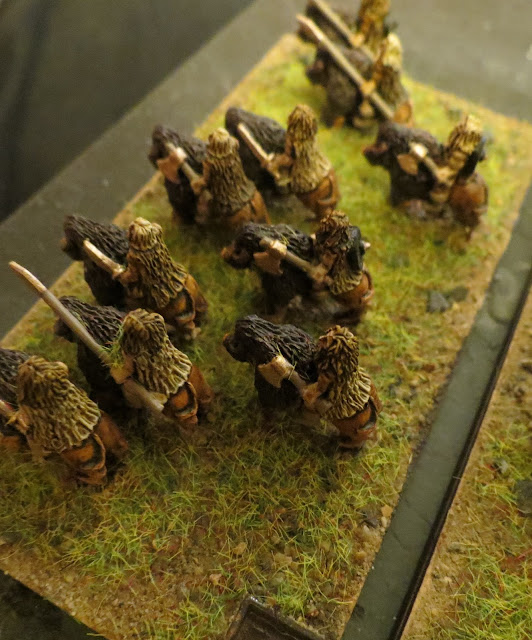 The bison riders were fun to paint too.  I like the idea of them thundering into battle.  I was going to do them all one colour, but felt they'd look better with a lighter skin tone and darker hair/fur.

These are the Desert Stingers, which are described in the army list as a menagerie of giant poisonous snakes, scorpions, manticores, and other fantastical beasties.  Now then, I'm not too sure about how I've constructed this unit.  Perhaps its the different colours, but there's something a bit disjointed about it.  Not sure.  Its good enough though, and I'm sure they'll perform just as well in the game, irrespective of how they're painted.

Pendraken's Barbarian Men army pack includes enough archer figures for a well stocked single unit, but I feel as the Barbarian archers in game can be skirmishers, they're OK to split up into two less densely packed units.  Anyway, as these are wild tribesmen I see them as lacking any sort of formation and organisation, taking to the field in ad hoc lines of archers more used to hunting than war.  Of all the Pendraken figures, these are some of the few I've found that need a bit of preparation.  They have metal that needs to be snipped away from the end of the bows.  I presume this excess is to facilitate the casting of the bows themselves (getting the molten metal to flow into these narrow mould cavities, and its no bother to snip those extra bits off. 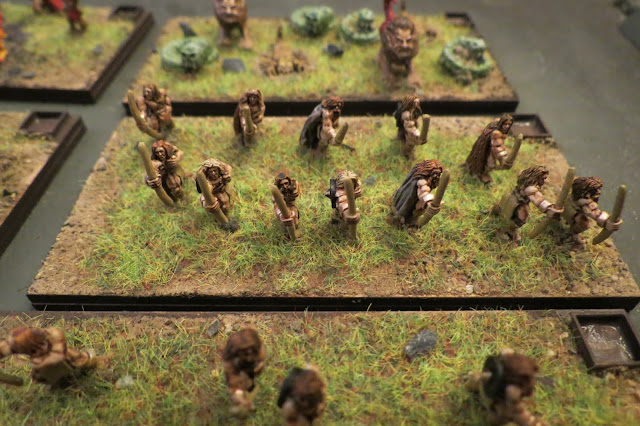 Lastly I finished up the warriors and the catapults. 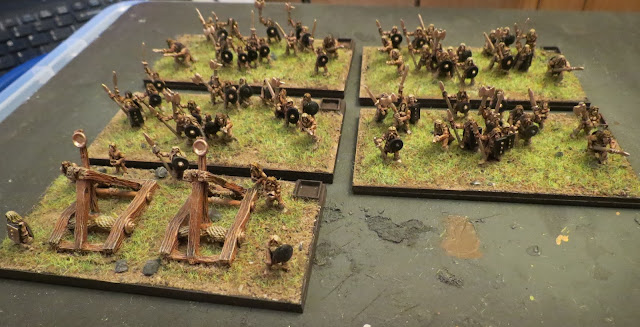 The Catapults were a bit of a pig to put together, coming without instructions or obvious contact points.  I think I've assembled them correctly; certainly it seems the only correct way to do them.  No matter, they look rather nice now they're done. 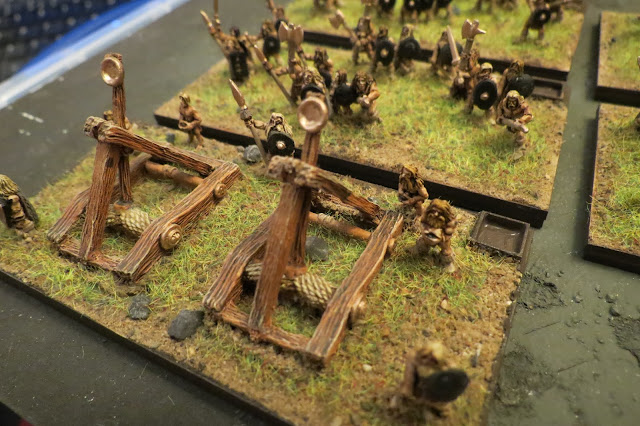 And finally I come to the warrior units that will form the core of the army.  Like the archers, these are not drilled soldiers, but rather tribal warriors, and ones in the "hero" tradition too!  So regimented ranks seemed out of place, which is why I made each base with scattered clumps of fighters gathered around the most impressive among them.  I imagine them bawling and wailing insults and challenges at their enemies.  The Barbarians are noted in the army list descriptions as using primitive wooden or stone weapons, with a few of them having access to metal like copper or bronze.  I decided to make them all armed with bronze weapons (except among the General's retinue who have managed to trade with more advanced folk for the much sought-after iron and steel!)  I wanted to give them a tribal motif too, and chose a simple black shield to unify the look of the force.  I was thinking about a Zulu-style black & white shield design, but with the scale of the miniatues, shape, and design of the shields, I couldn't make it look like I wanted to.  So the simple black scheme won out. 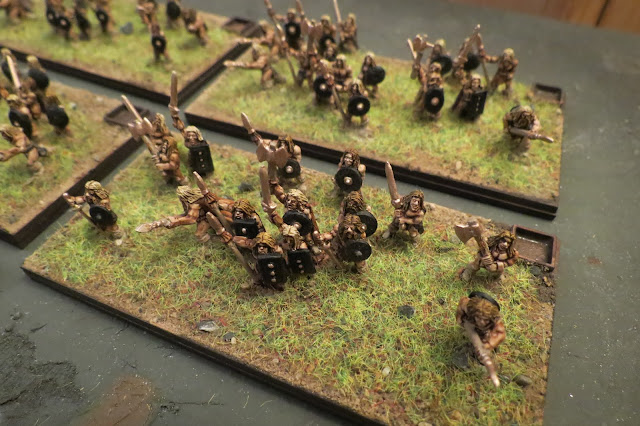 Overall, another successful army project completed and ready to go once the quarantine lifts!