Since ancient days the elven kinfolk have pursued unsettled blood-feuds.  In this battle the high elf clan of King Elion I Ar clashed with his dark cousin Ezekel in the An Chenn Valley.  If any were watching, the reason for this enmity would not be evident, but the grim-face elves of both armies knew.  They would not tell, but this fight would take no prisoners to settle the matter.

We began with terrain choices and placement.  The High Elves, having a mix of heavy open field troops in their knights, and light terrain fighting skirmishers with their scouts opted for a couple of small fields (maybe outlying farms, or simply areas of rough ground).  The Dark Elf players went instead for two large hills.  Rolling for the placements the battlefield was set as a valley between two hilly areas.  A valley of death perhaps? 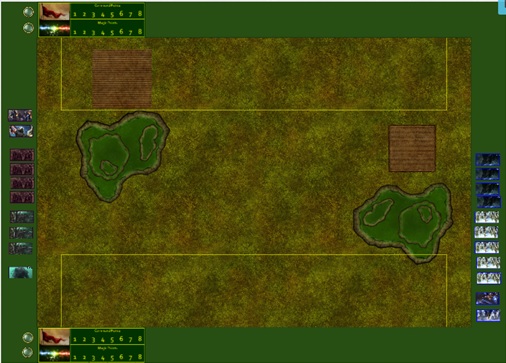 The players then deployed their armies in alternate “batches” of units as per the rules, and both sides vied for position, enacting their own plans and reacting to the placements of their opponents.  As it happens, with similar armies and seemingly similar battle plans the deployments mirrored each other.  Both the High Elves and Dark Elves deployed the melee units centrally in the valley, and their archers on the flanks.  On the western flank, the Dark Elves pushed their heavy archers up through the fields to contest the hills against the lighter but more mobile High Elf Scouts. 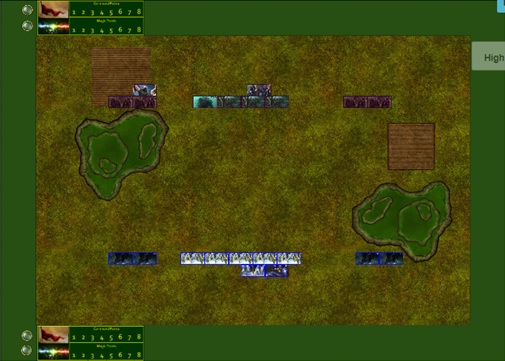 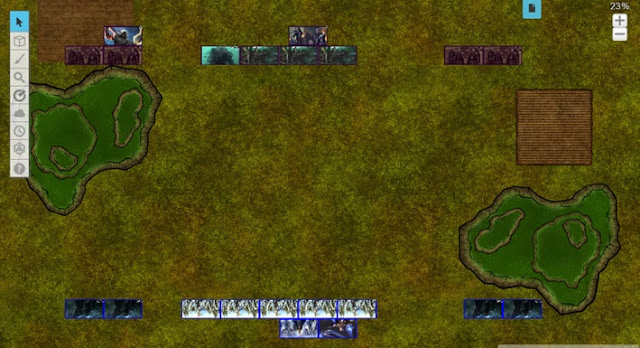 The battle begins with the High Elves seizing the initiative.  While the Command influence is low, both the armies magic-users are empowered with a glut of Magic Points.  They opt to spend them on their initiative spells.  The High Elves cast Hypnotic Commune to reduce the Dark Elf Commander’s ability to influence this turn, but the Dark Elf Warlock counters with Arcane Winds to restore the balance.

The High Elf Commander attempts a “group move” for the knights and fails so they stand firm.  The Dark Elf plan seems to involve goading the High Elves to come to their lines up the valley so opt not to move their centre.  Instead the battle opens on the flanks with the High Elf scouts pushing over the hills into range of the Dark Elf bows.  On the east flank, inspired by their Chieftain, the Dark Elf archery is brutal (scoring 5 hits!)  The scouts retreat back over the hill, and their courage bolstered by their Commander, they recover quickly (making all their Protection rolls and removing all the hits!). 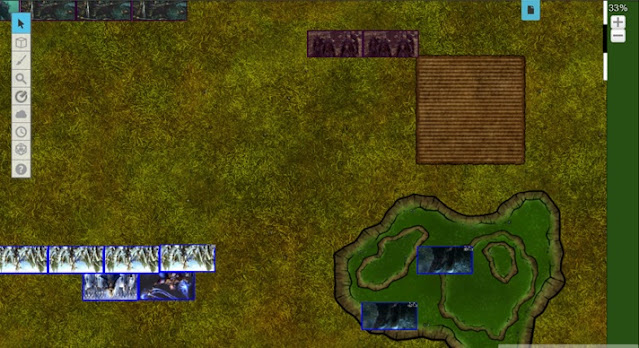 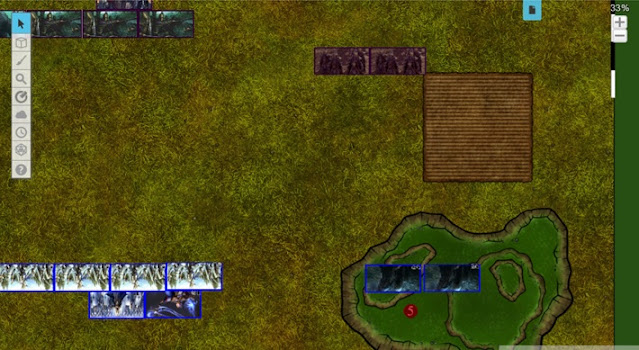 Inspired by their archery, the Dark Elves seize the initiative for the turn.  Again, both magic-users generate decent magic and in this case the Dark Elves use “Raider’s Savagery” to enhance their archers with magical arrows.  During the turn, the High Elves respond by casting Blinding Glory on their centre formation of knights, to enhance their protection and making them cause fear.  While the protection turns out to be usefull in shrugging off the Dark Elf archery, again the knights fail to move.  The main action for the turn happens on the east flank, with the High Elf Scouts developing their flanking move around the Dark Elf Archers, making good use of the additional mobility provided by the Parting Shot special ability to get into shooting positions. 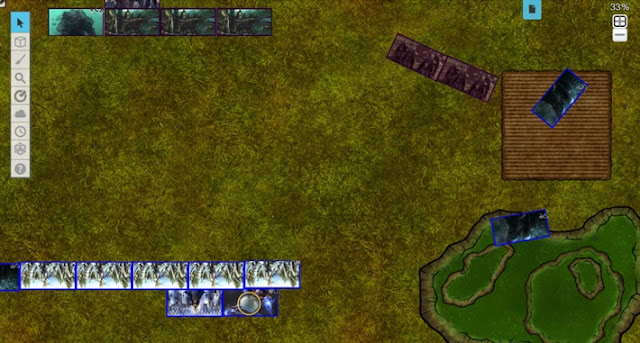 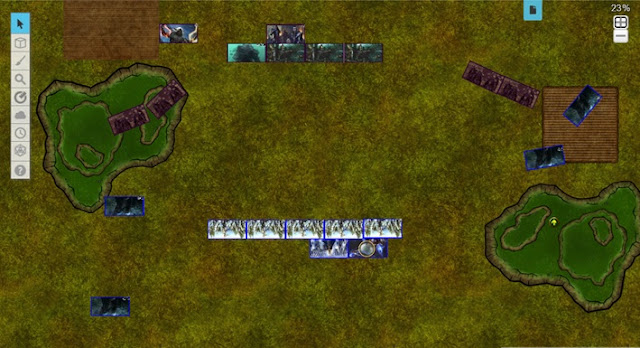 The High Elves regain the initiative and with a slow round for magic, the Knights finally move forwards towards the Dark Elf main fighting line.  Ignoring the more mobile High Elf Scouts, the Dark Elves respond to the approaching Knights but turning their archers in to harass the flanks of the approaching wall of lances. 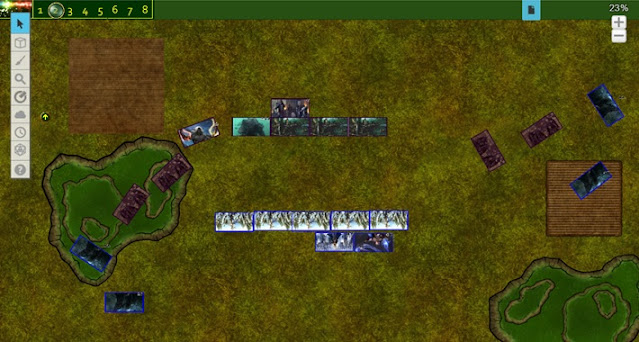 The Dark Elf Archers also rout a unit of High Elf Scouts (who eventually flee the field, being too far from their Commander to be rallied). 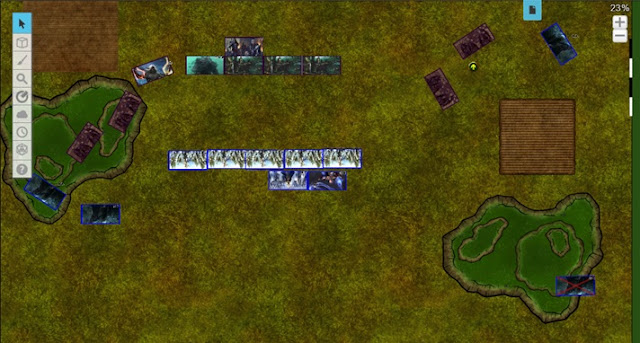 The Dark Elves seize the initiative again, and this turn they prepare for the expected melee.  Although they have the initiative and could initiate the melee, they choose to sit back and let the High Elf Knights come on.  Their Warlock casts the “Raider’s Savagery” this time to boost the fighting prowess of their line Warriors.  The set their line grimly to face the coming storm. 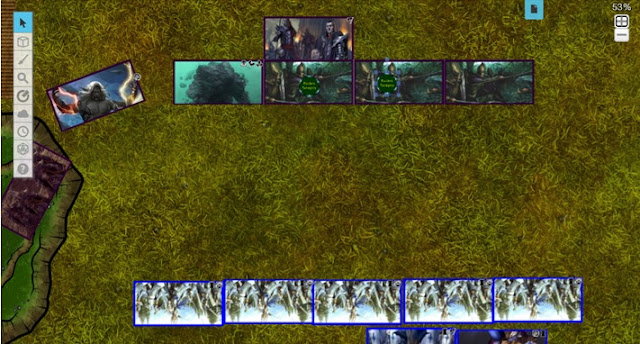 And come the storm does!  The High Elves send their knights in to the charge.  Given their terrible motivation checks for the Knights so far, the High Elf players are cautious about their melee charges.  They are not confident that they will be able to motivate all their Knights into the charge and so they do something that is possible on the charge…the wisdom of doing so is less certain. 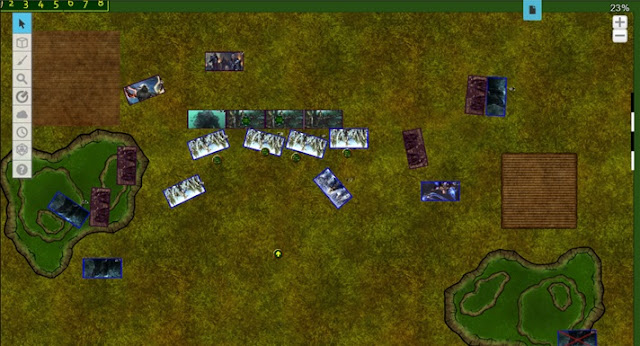 When making a charge it must be by the shortest route, but must contact with front edge or corner.  To avoid making contact with multiple Dark Elf units, the High Elf players opt therefore to “kink” their knight line.  They do this to try not to have any Knight unit facing two or more Dark Elf Warriors, in the event that their Motivation rolls remain as bad as they've been in the battle so far.

You may think of this as the knights breaking their formed lines into wedge formations to focus their strength on a part of the Dark Elf line.  Of course this has consequences for the possible fall back moves that the knights may need to make, as their backfield becomes confused.  Will this plan work?

Also, on the west flank of the Knight line, the Dark Elf archers on the hill are within 1 base width and so the knight must make a restricted move or charge the archers.  This prevents them getting into the Dark Elf Warlock, and they choose not to charge up the hill into the archers.

The melee itself is brutal for both sides and the Dark Elf line falls back under the pressure, taking a spread of hits and wounds across its line.  The Knights also take a mass of hits, and all but one has to fall back.  Now the “kinked” line attack becomes an issue with several fall backs being blocked, increasing the hits done!  Luckily the High Elf Commander has enough Command Points stored to keep any of the Knights from routing, but they certainly take a beating. 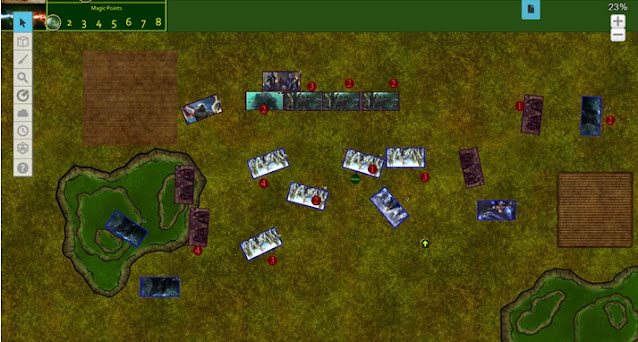 Only a single Knight doesn’t have to fall back, and chooses to pursue into the Dark Elf line, this time conforming to pin all three Warriors and prevent them charging next turn. 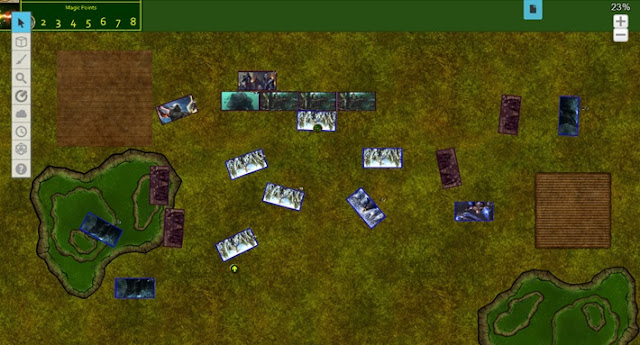 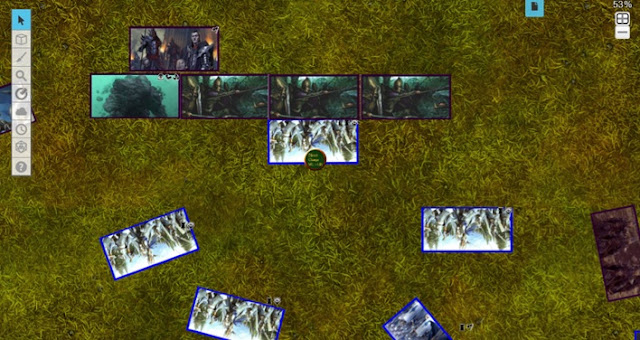 Both armies are now in the position of having most of their units suffering Morale loss and being close to rout.  The High Elves are in disarray and are surrounded on three sides by the Dark Elf forces.

The Dark Elves retain the initiative, and what will turn out to be the decisive event of the game, the Exceptional Warlock generates 8 Magic Points!  They immediately invoke their master spell “Spirit of the Black Dragon”; the Warlock and Chieftain take flight over the battlefield, and all the Dark Elves become “powerful” and cause fear. 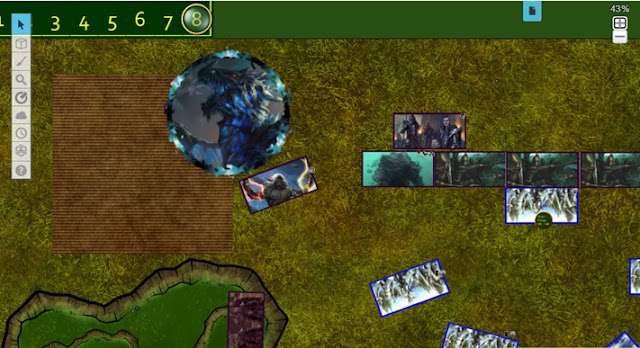 The Dark Elves throw everything into melee and as the combats resolve, the terrified and disorganised High Elf Knights rout in large numbers. 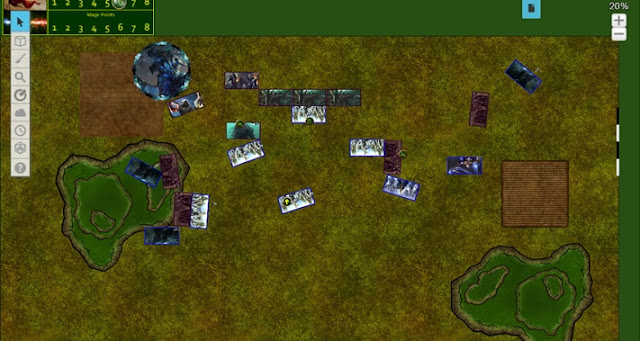 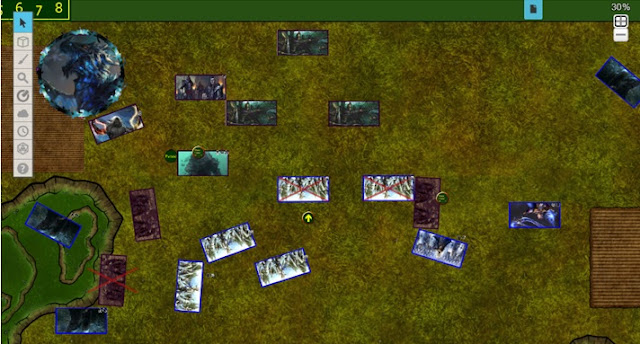 Although the High Elves still hadn’t broken, it was 10:30 so we called the battle there as looking like a win for the Dark Elves.  With their losses, the High Elves would struggle from this point on.

The Dark Elf battleplan worked well, with their melee centre holding back to allow the archery flanks to do some damage before the inevitable clash.

The High Elf plan to get the Knights in and let these high quality units do their work never really came off.  Failed group moves, and poor Motivation rolls delayed things, and when they went in, the disrupted lines made the job of fighting harder.

Things were definitely going in favour of the Dark Elves, and then their fortuitous casting of their master spell invoked the power of their black dragons and really hastened the end.  The terrified High Elf knights couldn’t recover and were routed in detail.

Overall it was a fun battle between two closely matched armies.